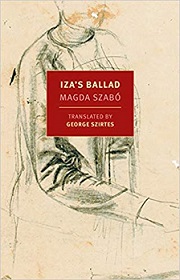 Literary translation is a labor of love. To do it well takes time, and translators are notoriously badly paid. So I often wonder how many excellent untranslated books there are out there that we’ll never have the pleasure of reading.

For instance, when Hungarian writer Magda Szabó died in 2007, her work was largely unknown in the English-speaking world. If you haven’t yet discovered her, you’re in for a treat. Thanks to New York Review Books (NYRB) Classics, we now have four of her novels in English.

Szabó’s The Door was one of the New York Times Book Review’s top 10 books of 2015. Since then, NYRB has put out three more: the quieter Iza’s Ballad, the less conventional Katalin Street, and, last month, Abigail, the Szabó novel best-loved in Hungary.

Szabó’s works are as psychologically rich as they are surprising. They take you to war-torn or occupied Eastern Europe and into the lives of some truly unforgettable characters. Szabó seems to believe that we least understand the people we most love, and her characters, in spite of their loyalty to each another, are frequently at cross purposes.

The Door deals with the thorny relationship between the narrator (based on Szabó herself) and her housekeeper, Emerence. It begins with a confession: “I killed Emerence. The fact that I was trying to save her rather than destroy her changes nothing.”

The loyalty between these women is matched only by their incompatibility. Emerence is almost mythic: a tireless worker of peasant stock and thoroughly anti-intellectual. She reads nothing — not even the newspaper. She lives by her instincts and through her connections with disparate members of the community.

Over time, she reveals to the narrator some horrendous and farfetched memories from her past. But since she’s also very private and proud, instead of fostering intimacy, her revelations mark a retreat to formality that the narrator finds irksome.

The narrator, by contrast, lives a life of the mind, yet in spite of her intellect and status, she’s less self-assured than Emerence. Under Soviet occupation, her writing has been “politically frozen” for years.

But just at the peak of the narrator’s professional life, just as she’s about to accept an important literary prize, she betrays Emerence in an unforeseen, irreversible way. The complex relationship between them begins to unravel, forcing painful questions.

Szabó explores another difficult relationship between women in Iza’s Ballad, an earlier novel first published in Hungary in 1963. Iza, a well-established physician, moves her widowed mother, Ettie, from her dilapidated village home into a Budapest apartment, with the intention of taking care of her. But the move inadvertently strips her mother’s life of context and meaning.

Trying to show love and gratitude, Ettie pampers Iza in her old maternal ways, but only ends up annoying her daughter. The stress points in their relationship emerge in the characters’ interactions, but also in beautifully described domestic detail.

With its different tone and almost dreamlike quality, Katalin Street stands apart from the other books. In it, three Hungarian families live a charmed existence before German occupation. But war places restrictions and demands on their lives. The ghosts of the people they were as children are companioned by the ghost of little Henriette, who died. It’s a harrowing, deeply affecting book.

As in her other novels, Szabó implies in this one that we often love people most fiercely when they least deserve it, while those who deserve our love go overlooked. She achieves a delicate balance in her keen observations, humor, and underlying sadness.

Now I’ve just finished reading Abigail, and I loved it. As translator Len Rix observes in his introduction, this one has “the lightest touch and the narrowest sweep.” It’s an enchanting and gripping coming-of-age story set in World War II during German occupation. A high-ranking general places his 15-year-old daughter, Gina, in a remote boarding school for her protection.

Gina sees at once that she’s much more sophisticated than her classmates. She arrives at the school with a knowledge of opera and glittering parties in Budapest, and with beautiful personal possessions. But these are taken away by the school authorities, and she must wear a dowdy uniform and follow arcane rules. “They have swallowed me whole. I am no longer myself,” she thinks to herself, misreading the situation.

There’s a big gap between Gina’s perceptions of people and who they are in reality. She frequently gets the sense that she is being gaslighted, when really she’s being protected. But you can’t help rooting for her as she tries to escape from a school party to the train station:

“Enjoy your bit of fun, Gina thought to herself. You might even win yourself a few pen nibs or sheets of Bristol paper covered in biblical quotations printed in gold. I shall be playing for higher stakes, and for a rather more exciting prize.”

Several critics have observed that there’s a lot of Jane Austen’s Emma in Gina. I think there’s also quite a bit of Portia from Elizabeth Bowen’s The Death of the Heart. The ethos of the school, the little world unto itself, is so tenderly drawn, and observed in such delightful detail, that you want to sink into it and stay there forever.

When you’re immersed in these extraordinary novels, it’s easy to forget you’re reading them in translation. But that’s down to the skill and sensitivity of translator Len Rix, and, in the case of Iza’s Ballad, George Szirtes. Translators of this caliber are real artists. But like many real artists — and like the heroes in Szabó’s novels — they labor in the background, vigilant, modest, and all too often unrecognized.