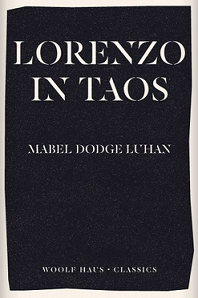 Maybe it’s time to take another look at D.H. Lawrence and to dust off forgotten memoirist Mabel Dodge Luhan. Long regarded as one of the most significant writers of the 20th century, Lawrence has been out of vogue for decades. The obscenity trial of Lady Chatterley’s Lover in 1963 sparked the Sexual Revolution. In 1970, Lawrence was denounced as a misogynist; by the 1980s, his star had waned.

But once upon a time, we all read him avidly. His genius was undeniable. I recently reread Lady Chatterley’s Lover, and his prose is just as admirable as ever. He’s intriguing on class, industrialization, even on intimacy. Only when you get to female sexual agency do things become cringy.

In Second Place, several incidents are taken whole cloth from Mabel, but “L” is a painter instead of a writer. The narrator, known as “M,” invites him to an estate in the marshes where she lives with husband Tony. She wants L to paint their landscape so she can see it through his eyes.

Things get off to a rocky start when he arrives with a companion. Upon seeing the treasured studio M is lending them, L’s companion exclaims, “It’s a cabin in the woods, straight out of a horror story!”

M feels that Tony is larger than life and at one with the land. “I’ve never seen Tony all at once,” she says. But rather than magnifying Tony in his painting, L’s vision reduces him. He paints a tiny figure on a small canvas — “shown full length and in meticulous detail like an old-fashioned miniature.”

L is enigmatic and unlikable, and M’s obsession unhinges her. But the strength of this cerebral novel rests in the way Cusk parses questions about the moral function of an artist, the role of compassion in an artist’s work, and willpower aligned with — or exerted over — others.

Lorenzo in Taos fascinates for different reasons. Part epistolary, part narrative, Mabel’s astute writing complements dozens of letters from Lawrence and his wife, Frieda. A manic energy drives the narrative forward. Her depiction of Lawrence, Frieda, and others in their circle is ruthless.

As a longtime patron of the arts who established vibrant literary salons in New York and Florence, Mabel had settled in New Mexico with a Taos Indian named Tony. She knew dozens of intellectuals, artists, and writers of the time and wanted Lawrence to write a definitive novel about the Taos pueblo. In order to get him there, she wrote a letter so long, it had to be rolled like a scroll. Then, each night, she willed him telepathically to come to her.

When Mabel wrote, the Lawrences were living in Italy, having moved there from England to put distance between themselves and Frieda’s first husband. After a year, they finally journeyed to Taos via Ceylon and Australia.

Needless to say, nothing about Lawrence’s visit went as scripted. When he arrived, he looked frail, trotting beside the robust and fleshy Frieda. Lawrence suffered from ill health all his life and eventually died of tuberculosis. What fueled him was rage. “I love trying things and discovering how I hate them,” he wrote in a letter quoted in Burning Man.

Lawrence displayed his explosive anger even before they’d finished the long drive to the ranch. “These men that leave the world — the struggle and heat of the world — to come and live in pleasant out of the way places — I have little use for them,” he remarked airily. Mabel reflected, “Just what he does himself, I thought. But he has little use for himself either. He is a frail cargo that he hauls through life with perpetual distaste.”

When at last they arrived, Lawrence saw Mabel’s house for the first time and giggled. “It looks like one of those nasty little temples in India,” he said.

Mabel wanted to get him into psychological alliance with herself. They began outlining a novel together, but Frieda put a stop to it. The battle for control of Lorenzo’s soul was on, and nobody was going to win.

When love didn’t sustain them, hatred stepped up to fuel their passions. Mabel came to understand that Lawrence wanted to destroy her:

“He would not let me live my life in the only way I knew, and actually the man had overcome me…It occurred to me that had Frieda let him write that book with me, he would have attempted by that means to annihilate the strong creature whose will was so evil in his eyes. For he held me to be the prototype of that greatest living abomination, the dominating American woman.”

She longed for him to appreciate Native American culture as one which should be upheld by all Americans. But Lawrence, as Wilson has it in Burning Man, “understood nothing. Lawrence stressed in his new Mexican essays, about Native American consciousness and culture, the aim of his insistence that ‘there is no bridge’ between the two worlds, ‘no canal of connection’ being to cause maximum offence to Mabel and those other ‘highbrows’ who fooled themselves into believing that the befeathered and bedaubed darling is nearer to the true ideal gods than we are.”

Lawrence gaslighted Mabel. After leaving Taos, he encouraged her in letters while, behind her back, he told others how hopeless and dangerous she was. He, in turn, though rubbed the wrong way by Mabel, seemed oddly stimulated by the friction.

Wilson quotes Maurice Sterne (one of Mabel’s husbands): “What you have to understand about Mabel…is that she was a dead battery who needed constant recharging.”

But the truth is more complex. For Wilson, Mabel was “the doyenne of modernism whose life reads like a Freudian case study.” As hypothesized by Wilson, her troubles went back to a syphilitic father and possible sexual abuse.

As for Frieda, nobody liked her in Italy or in Taos. She was coarse and saw everything through a sexual lens. Wilson quotes Aldous Huxley: “Frieda wasn’t a person. For Lawrence she was his ‘food…a vital organ of his own body.’”

The poet H.D. (another of many who became obsessed with Lawrence) was astonished at the change which came over Lawrence when Frieda entered the room. His face became animated where before it had been a mask. Just as Mabel needed Lawrence to jumpstart her perceptions, Lawrence needed Frieda.

But all these toxic relationships translated into powerful writing. For Lawrence, a work of fiction “hung upon a frame of actual experience,” and, according to Wilson, “All novels…were acts of trespass and all novelists were trespassers.”

So, did he ever write about Taos in the way Mabel hoped? He did write “The Woman Who Rode Away,” in which a character based on Mabel has her heart cut out by the Indians as a sacrifice. And his final novel, The Plumed Serpent, set in Mexico rather than New Mexico, is in Wilson’s view “alien and alienating, hard to forgive and hard to forget. It is also boring, at times brutally so.”

Whether Lawrence resisted Mabel to his detriment, we’ll never know. But, writes Wilson, “No matter how much he insists on male superiority…Lawrence is unable to convince us, just as he was unable to convince his wife, that his was not the frailer sex.”

And Mabel Dodge Luhan? Lawrence’s influence made her a writer. Upon the publication of the first two volumes of her memoir in 1926, he was floored.

Wilson writes, “Mabel had written, he said, ‘the most serious “confession” that ever came out of America, and perhaps the most heart destroying revelation of the American life-process that ever had or ever will be produced. It’s worse than Oedipus and Medea, and Hamlet and Lear and Macbeth are spinach and eggs in comparison.’ Mabel’s book was ‘a sort of last word,’ it was ‘hemlock in a cup.’ Mabel had written, in other words, the Great American Memoir.”