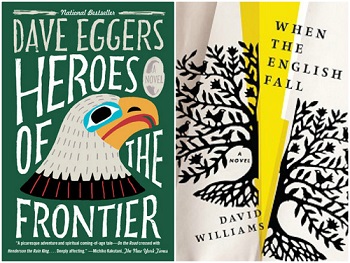 Fight-or-flight response is that physical reaction to a perceived threat that characterizes much of the animal kingdom, including humans, creating a cascade of hormones that prepare us for either.

It is arguable that contemporary life — with its growing web of digital networks, frenetic multitasking, ubiquitous noise (through those earbuds), helicopter-parenting, lack of privacy, and stress from working and commuting — presents such an existential threat and prompts that reaction.

Two recent books opt for flight in the face of this threat. Dave Eggers’ Heroes of the Frontier makes today’s frontiers a refuge for those too cowardly to face modern life instead of the adventurous leap into the unknown they used to represent. But those who go there are still heroes, because cowards or not, they do what they need to in order to survive.

In fact, it turns out that the frontier is not a refuge; it merely poses different threats. This is what Josie finds when she flees from Ohio to Alaska with her two children, Paul and Ana, after an elderly patient bankrupts her dentistry practice with a lawsuit claiming Josie failed to spot her oral cancer.

Along the way in this postmodern picaresque, Josie and her family encounter a number of characters both menacing and kind, but none without danger. They also rediscover the simple pleasures of playing a game by firelight, walking barefoot through a stream, or cooking hot dogs over a bonfire.

But that scent of danger forces them back into their rented RV, fleeing from every new encounter as well as the life they had before, symbolized by Josie’s no-account ex-partner who she is certain is trying to hunt them down. The theme may be as banal as “you cannot escape from yourself,” but it is told with such style and wit that it truly does make Josie a hero.

It’s a different kind of flight in David Williams’ When the English Fall. The Amish protagonists have long since — back in the 19th century — fled modern civilization, abjuring most technology in favor of preserving a life centered on family, farm, and church.

So when a solar storm plunges the rest of the world into darkness by knocking out all electricity and machinery, the Amish continue their life as before, plowing their fields with horses, picking and canning beans, reading by candlelight. Except, of course, hungry people fleeing the darkened cities gradually realize that these Amish farms have well-stocked larders.

Fight or flight? Amish famously don’t fight, even in self-defense, and the safety of their isolation starts to look pretty fragile. The unfolding crisis is told through the diary of Jacob, one of the Amish farmers. At one point, his daughter Sadie, something of a psychic, suggests they need to go to someplace that is “not safe.”

The “not-safe,” like Eggers’ frontier, is a refuge that only very brave cowards can choose. Williams’ prose style reflects the calm that Amish seek to preserve amid the din of modern civilization, and even amid the catastrophic dissolution of that civilization. It works in this short novel because the suspense carries the story.

Eggers’ book has more fireworks, as he rips into the shallow preoccupations of modern suburban life with gusto — the moms with ponytails who rush around in their SUVs to make their Pilates session in time to take the kids to swimming/soccer/play practice; the dying dental patient who is still litigious enough to ruin the life of someone else; the relationships that are so ephemeral they’re gone before you realize it.

Reading these two novels, with characters who are often sad and pessimistic yet who still respond to the instinct for survival, can lead you to the conclusion that the only way left for us to fight is flight.

When the pros behind the scenes become authors themselves.

Past (and Future) Perfect

The particular allure of historical and post-apocalyptic fiction.