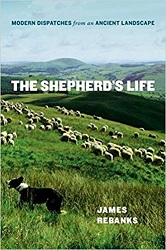 James Rebanks may be the best-known shepherd in the English-speaking world. His Twitter feed (@herdyshepherd1) has regaled tens of thousands with the beauty of the Cumbrian landscape in England’s Lake District since 2012 and led to his bestselling 2015 memoir, The Shepherd’s Life: Modern Dispatches from an Ancient Landscape. Last spring, he was the subject of a profile in the New Yorker.

Rebanks celebrates not only the countryside, but the way of life he likes to say his family has lived for centuries. He makes a compelling case. (His literary skills were honed at Oxford, which he attended during a short break from his farm.) His Lake District is not the idle landscape of Wordsworth, but home to the hard life of a sheep farmer, which nonetheless has its own rewards.

The author recounts how unhappy he was sitting in the local high school, listening to the teacher encouraging all of them to study and escape the dismal life they had been born into. For Rebanks, it was not dismal. It may have been different for some of his classmates who did not have their own family farm, but, for him, the values enshrined in his way of life seemed worth preserving.

In this respect, Rebanks’ memoir bears a passing resemblance to Hillbilly Elegy: A Memoir of a Family and Culture in Crisis, the controversial bestseller by J.D. Vance. It, too, describes the values of a culture often overlooked or looked down upon, including the Appalachian values of his family’s homestead in Kentucky. Vance’s memoir rings somewhat less genuine and far less positive than Rebanks’, but he is telling his story more or less secondhand.

But both writers — white men that they are — are defending a largely rural culture that urban elites tend to look upon as deplorable. In the U.S., at least, as Vance details, it is a culture overtaken by drug addiction, alcoholism, and suicide.

By now, we know it is these “forgotten men and women” who tipped the vote for Britain to leave the European Union, who have donned yellow vests and besieged French President Emmanuel Macron in his Elysée Palace, and who put Donald Trump in the White House. (I couldn’t find any reference to how Rebanks voted in the Brexit referendum, and he may not be telling.)

Rebanks actually visited Kentucky on his book tour the week just before the 2016 election. He wrote about his impressions in the New York Times:

“I was shocked by the signs of decline I saw in rural America. I saw shabby wood-frame houses rotting by the roadside, and picket fences blown over by the wind. I passed boarded-up shops in the hearts of small towns, and tumbledown barns and abandoned farmland. The church notice boards were full of offers of help to people with drug or alcohol addictions. And yes, suddenly I was passing cars with Trump stickers on their bumpers, and passing houses with Trump flags on their lawns. The future we have been sold doesn’t work.”

His reaction mirrors my own when I traveled through northern Missouri in late 2015 and stopped in the region near Shelbina where my great-grandfather had his farm. My mother grew up on that farm, and I know it only from her descriptions and my visits as a young child. I’m not going to write an elegiac memoir about it, but that 2015 visit certainly opened my eyes to the blight that has overtaken a whole way of life.

French author Christophe Guilluy presciently described a similar situation in France in a 2016 book that has just been published in the U.S. and favorably reviewed in the Wall Street Journal, Twilight of the Elites.

The main issue there is immigration, a problem that bedevils a Europe of open borders. But Guilluy’s focus is on France’s urban elites, who have blissfully ignored the impact of their policies on what they view as peripheral society. The recent riots of the gilets jaunes protesting a sharp increase in the gasoline tax is one manifestation of their discontent, and probably not the last.

James Rebanks is back on his farm and feeling better about the respect being given to his way of life. He is even willing to put up with the Wordsworth tourists and realizes they have a right to share the beautiful landscape he lives with.

Tolerance and understanding is a two-way street. Books can help bridge the gap in the absence of firsthand experience, but neither will work without an open mind.

Darrell Delamaide, a writer based in Washington, DC, is author of The Grand Mirage, an historical thriller.

You have nothing to lose but your guilt.