A timeless classic with lessons for today 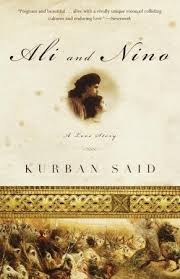 In an unsettled time riven by tensions between East and West, Muslim and Christian, there is one classic novel that can provide insight into our current situation even though it offers no solutions. Quite the contrary, for Ali and Nino by Kurban Said is a thrilling love story that has an end no happier than “Romeo and Juliet.”

The romance between the Azerbaijani Muslim Ali and the Georgian Christian Nino in Baku in the wake of World War I obliges the partners to bridge the wide gulf between their two cultures even in a world where Muslims and Christians live peaceably side by side.

This is not a “love conquers all” tale, because the protagonists struggle with conflicting passions — Nino is afraid, for instance, that Ali will make her wear a veil or will take additional wives. It shows us that the cultural conflicts we are wrestling with today are not new and do not have any “solutions.” They will always be with us.

The romance takes place against the backdrop of Azerbaijan’s struggle for independence after the 1917 revolution brought an end to the Russian Empire and before the Soviet Union incorporated it as a Soviet Socialist Republic in 1920.

The action is mostly in Baku, the capital of Azerbaijan, an exotic city on the Caspian Sea made prosperous by the oil boom; at the turn of the 20th century, Baku accounted for nearly half of world production.

While the novel itself portrays a cultural crossroads that is a microcosm of the confluence and conflict between East and West, the story behind the book is a lesson in 20th-century history.

Ali and Nino was originally published in German in 1937 in Vienna by author or authors unknown under the pen name Kurban Said. It was “lost” in the tumult of World War II and rediscovered in a secondhand bookstore by Jenia Granam, a Russian-born dancer, who translated it into English and reintroduced it to a global audience.

The heirs of Baroness Elfriede Ehrenfels, an Austrian aristocrat, have successfully laid claim to the book’ copyright for the baroness’ role in getting it published (and perhaps writing it in part). But New Yorker writer Tom Reiss makes the case in his 2005 bestseller The Orientalist that Lev Nussimbaum, a Jew who converted to Islam and who wrote under the pen name Essad Bey, is the book’s true author.

Other experts now claim that large parts of the novel were plagiarized from nationalist Azerbaijani author Yusif Vazir Chamanzaminli. The debate goes on.

As Paul Theroux observed in his afterword to the Anchor edition of Ali and Nino, however, “Does the speculative issue of authorship really matter?...This wonderful novel — beautifully constructed, vivid and persuasive, a love story at once exotic and familiar — is living proof that art is indestructible and transcendent.”

In so many ways, then, Ali and Nino, timeless as it is, is a book for today. It tells us that cultural clashes are inevitable and never easy to resolve, but that they should not blind us to the individual personalities with whom we share a common humanity.

Bookish Karma’s Gonna Get You

Are we destined to encounter the same authors over and over again?