Hearing language with your inner ear 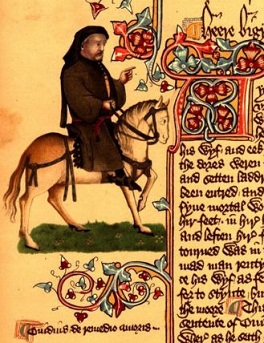 When I took Chaucer in college, my teacher was a gifted Irish-American who relished the sound of the Middle English and read the opening of The Canterbury Tales to us with great gusto:

Whan that aprill with his shoures soote
The droghte of march hath perced to the roote,
And bathed every veyne in swich licour
Of which vertu engendred is the flour…
Thanne longen folk to goon on pilgrimages.

You feel the very earthiness of the Anglo-Saxon roots of English in these words, and they have a deeper resonance than the more abstract words we have from Latin via Norman French.

I often feel the same stirring when I read contemporary British authors, who seem to have a better feel for these Germanic origins than American writers, with our somewhat blander idioms.

For instance, take Helen MacDonald, an English poet and research scholar, in her moving memoir, H Is for Hawk, as she describes an early morning visit to the woods to look for goshawks in action: "I was looking down at a little sprig of mahonia growing out of the turf, its oxblood leaves like buffed pigskin. I glanced up. And then I saw my goshawks. There they were. A pair, soaring above the canopy in the rapidly warming air. There was a flat, hot hand of sun on the back of my neck, but I smelt ice in my nose, seeing those goshawks soaring. I smelt ice and bracken stems and pine resin. Goshawk cocktail."

There’s a robustness to the language that characterizes many of my favorite British writers — David Mitchell, Rennie Airth, Simon Mawer, Robert Goddard. The very language propels the narrative forward. Beowulf, Chaucer, and Shakespeare are lurking in their descriptions, their dialogue. Are they more deeply immersed in these classic writers, or is it the very culture that connects them to these roots?

The famous Elements of Style by Strunk and White, a primer on American English style dating back to 1918, reminds writers to avoid a “twenty-dollar word” when a “ten-center” is handy.

“Anglo-Saxon is a livelier tongue than Latin, so use Anglo-Saxon words,” the authors prescribe. “In this, as in so many matters pertaining to style, one’s ear must be one’s guide: gut is a lustier noun than intestine.”

Readers, too, can be guided by their ear. This doesn’t mean reading aloud like my Chaucer professor, but listening for the language’s cadence and color with your inner ear can enhance your appreciation of the text.

English has the tremendous advantage of combining the vigor of German with the polish of Latin, but the vigor seems to come through more clearly with a British writer — or Irish, or Indian, or others schooled in the British tradition.