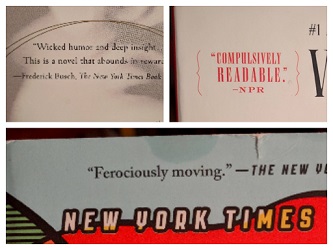 If you pick up a book, there’s a good chance there will be some superlatives on the front cover. Here, I’ll choose one from my bookshelf at random: Pachinko by Min Jin Lee.

Yup. On the cover, Junot Diaz calls it “a powerful meditation on what immigrants sacrifice to achieve a home in the world.” (For the record, Lee’s novel of a Korean family scrabbling to make a life in 20th-century Japan is that and so much more; my blurb would include the adjectives “astonishing” and “deeply moving.”)

Those snippets of praise are called blurbs, and in the literary world, they are just one more drop of grease in the mixture intended to smooth a book’s turn from manuscript into bestseller (or, at least, into something discerning readers will spend some money on).

I have a book coming out in November, and blurbs have been on my mind. Blurbs don’t just fall from the sky, and famous authors don’t go rummaging about for new books to praise. Blurbs are requested.

My previous columns have mostly been about big kindnesses — organizing a time-intensive fundraiser to provide support to sexual-assault victims or building a life around bringing literacy to young children, for example. But life is mostly made up of small kindnesses, and I want to honor those, too.

Asking for a blurb is anxiety-inducing. Writers don’t always have to ask on their own behalf, but they often do. Especially newbie debut authors like me.

It’s scary to ask busy people for even more of their precious time. Requesting that someone consider doing a blurb is asking that person to give you four to six hours of her life — and then, if she is so inspired, to say something nice about you afterward.

Romance writer Sarah Hawthorne told me about her experience soliciting blurbs for her debut novel, Enforcer’s Price. Before getting published, Sarah had stumbled into an email correspondence and then a coffee date with international bestselling author Julie Kenner. When Sarah was preparing her debut, she worked up the nerve to ask Julie to read it.

“Do you remember me?” Sarah wrote then. She explains, “We hadn’t emailed in forever and I was nervous behind my keyboard. She responded quickly that yes, she remembered me! She agreed, and my hand was shaking as I hit send on my manuscript.”

Sarah’s nerves were unfounded. Julie read the book, wrote Sarah a lovely email, and gave her a blurb.

“The thing I love the best about her email/quote is that she actually read it. Cover to cover. She read my story and gave me an amazing marketing tool. Julie Kenner believed in me!”

That kind of encouragement was huge for Sarah, and still is, now four books into her writing career. She says:

“There are days that I still question, am I good enough? Days that I get a bad review and consider hanging up my plotting index cards and learning to crochet. Those are the days that I pull up Julie’s email. Her words remind me of the author I’m still striving to be, and I’m renewed, refreshed.”

I asked romantic-comedy author Laura Heffernan, who has published three books in her Reality Star series, why she makes the time to blurb unknown writers’ books.

“I want to help fellow authors,” she says. “If the book sounds good and I have the time, I’m likely to say yes.”

Since writers are almost always dedicated readers, there is a joy in finding a new book to love. “I mean, I get to read a free book in my favorite genre by someone I like, which is pretty exciting,” she says with a smile.

Historical fiction author Sara Ackerman was thrilled to get her first request for a blurb. “That feeling that someone thinks highly enough about you and your book to want your words on their cover — it's wonderful!”

The first time Peter McLean, author of Priest of Bones, received a blurb, he says he felt “enormously relieved and very, very grateful!” He was an unknown author, and he reached out to fellow science-fiction writer Dave Hutchinson. “He was generous enough to offer to read my book, and luckily loved it and gave me a quote.”

Now, Peter has editors coming to him and requesting that he read forthcoming novels from other writers.

“It's really flattering and a bit surreal to be asked — like, someone cares what I think?” he says. But requesting blurbs comes at a risk, both for the requestor and the reading author. “I wouldn't put my name to something I didn't like,” Peter notes.

It’s the burden of asking an author I admire for both his time and his good opinion that weighs on me when I’m sending blurb requests.

I’ve been touched by how generous other writers have been with their time. Yes, a few have gently informed me that they can’t consider doing a blurb, and I thank them for taking the time to send a no, which no one likes to do. But, so far, six tremendously talented, extremely busy writers have taken the time to read my book and give my publisher some praise the publisher could use.

Maybe we could all, writers and non-writers, use a few more blurbs in our lives.

Carrie Callaghan’s debut novel, A Light of Her Own, about 17th-century Dutch painter Judith Leyster, is forthcoming from Amberjack Publishing in November. Follow her on Twitter at @carriecallaghan.