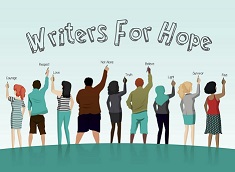 It would be hard pinpoint the earliest rape recorded in literature. Sexual assault in the Hebrew Bible? Yup. In Greek mythology? Of course. In Homer? Kidnapped trophy women are central to The Iliad.

But victims of sexual assault have also used the pen to fight back, at first obliquely as women began writing in the Renaissance, and then, by the 20th century, explicitly. Today, survivors of all genders share powerful narratives describing, denouncing, and reconceptualizing sexual violence.

Five years ago, Kelly Johnson decided to do more than just write about surviving sexual assault. She created a fundraiser centered on writing and writers to support the Rape, Abuse & Incest National Network (RAINN), the largest anti-sexual-violence organization in the United States. Her fundraiser, Writers For Hope, just completed its fifth iteration, and she raised an impressive $10,007 from bids on items donated by 109 other writers and craftspeople.

I asked Kelly to share her story with our readers.

Her experience began four years before that first fundraiser:

“I had tried to leave for work in the early morning only to have a stranger force his way into my apartment and proceed to beat, smother, strangle, and rape me. My best friend, and roommate, saved my life — she got the police to the apartment before he could complete his murder attempts and escape.

“And through my experience with the legal system and my early reading of the RAINN website, I continued to find more reasons why people listened to me, when so many other rape survivors are left to suffer in silence.”

Kelly’s visible injuries, small physical stature, white race, and status as a heterosexual woman seemed to make her story more sympathetic than those stories of people without those privileges.

She was, she says, “the poster child for our society’s Palatable Rape Survivor.”

In the third year after the attack, she had recovered enough to begin planning an independent international trip. But she soon hit a major roadblock. She couldn’t stop searching news outlets for stories on rape.

“I spiraled and probably would have continued doing so until I was completely unraveled, if my mom hadn’t stepped in. She stopped my spin into darkness with one question. ‘How is what you are doing right now helping any of these people?’

“It wasn’t. I mean, it was a nice thought — make sure their stories are read — but it didn’t accomplish anything other than freezing me in my trauma.

“I went back for my third stint in therapy and started to get my head on straight. I started spending less time crying in bathrooms and more time circling back to my mother’s question — trying to figure out what I could be doing to help people.

“The following March, I was finally ready to tackle the daunting prospect of approaching total strangers to take part in the cause. Deciding to combine my interests, I came up with the idea of the Writers For Hope Online Auction and drafted a letter to send to authors, agents, and editors.”

Now, Kelly has been doing Writers for Hope for five years. She starts soliciting donations, like signed books or packages from literary agents or published writers critiquing unpublished manuscripts, as early as four months before the auction opens. It’s a ton of work that she does all on her own, uncompensated.

I asked her why she still does it.

“Over the last 25 years, sexual assault has fallen by 63 percent. That’s amazing. But we’re still nowhere near where we need to be. The U.S. Department of Justice’s National Crime Victimization Survey shows that currently there is one sexual assault every 98 seconds. Seconds.

“The fact that this is 63 percent better than it was 25 years ago is a horrifying statistic to consider. ‘Better’ is still not good enough and until it is, I’m a big believer that anyone who can do anything to help should be.

“There is also a self-serving component of the auction. At a time when the majority of the news we see focuses on people being horrible to each other, this event basically serves as the annual reset of my world view.

“From that very first email I ever sent out about this event — not only were people agreeing to donate their time and resources, but they were actually thanking me for the opportunity. This continues to blow my mind every single year. People thanking me for giving them an avenue through which they could give of themselves.

“This year, the auction had 109 donors and visitors from 836 cities and towns around the U.S. and 39 countries worldwide. I have met, in person, maybe 15 of these people. The rest are still basically strangers to me, past the occasional Twitter connection. I doubt they have any idea what a monumental role they have all played in reminding me why this world is worth fighting for.

“They remind me, every year, that I am not alone in my fears and concerns. And now I think of it a lot like being in the high school choir. My music teacher used to really hammer home the idea of staggered breathing before a concert. Make sure that you were catching your breath at a different moment than the person next to you, that way the sound of music would be continuous.

“It’s been eight years now, and there are still many days when I need to catch my breath. I need to step back and turn inward. In the last year, this need has increased significantly as I’ve been torn between being elated that necessary conversations are finally becoming more mainstream and emotionally exhausted at seeing my knowledge that these issues are rampant confirmed on an almost hourly basis.

“As difficult as these moments still are, they no longer mire me despair because I know now that all the people next to me are still singing. Just as I know that on the days when I’m going strong, there are others who aren’t.

“That’s why I keep doing Writers For Hope — because the problem is still huge, but so is the group fighting it. It’s a way to amplify the song.”

Carrie Callaghan is a writer living in Silver Spring, MD. Her debut novel, A Light of Her Own, is forthcoming this November.