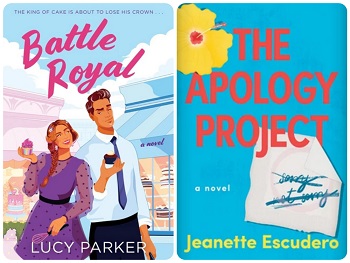 Happy, happy September! I’m equal parts excited and anxious about this school year, and reading has been a much-needed escape from reality. (Well, reading and shopping for school supplies. I love school supplies…) Here are a couple of my favorite romance novels from the past month. Happy reading!

In this instance, the show is “Operation Cake,” and former contestant Sylvie Fairchild has turned her on-show loss into a personal win. After being booted from the program, she pursued her dream and opened her own bakery, Sugar Fair. Now she’s a social-media darling whose rising popularity has caught the attention of the producers of “Operation Cake.” Except, this time, they want her to be a judge.

There’s only one problem: She’ll have to share the podium with Dominic De Vere — the same judge who voted her off “Operation Cake” four years ago. Dom is a British baking legend with a notoriously cranky demeanor. So he’s less than thrilled to be judging alongside Sylvie, especially once he learns they’ll also be competing against each other for a coveted contract:  designing the cake for Princess Rose’s forthcoming wedding. The princess loves Sylvie’s style, but Dom is the king’s favorite baker. Now, it’s a race to see who can create a cake fit for a princess.

Sylvie and Dom’s chemistry is a tangle of attraction and aggravation with a healthy dose of laughter. They understand each other in a way that can only happen with someone who shares the same career. As professional rivals, they share plenty of mutual respect, but their approach to baking — and life — is different enough to cause conflict. It’s a treat to see how well they complement one another once they find their rhythm and learn to trust each other.

I was entranced by the premise of Battle Royal, but it’s the well-developed characters that make it a standout. Helping to move the plot along is a cast of terrific secondary characters that I look forward to revisiting in the next installment.

Imagine your job is the only thing that matters in your life. Now imagine you just punched a coworker and quit that job. That’s Amelia Montgomery’s reality in Jeanette Escudero’s The Apology Project (Lake Union).

As a top litigator at her Chicago firm, Amelia has worked hard, sacrificed a lot, overcome workplace misogyny, and burned more than a few bridges along the way to her single-minded success. When an altercation with a partner at her firm leads to a sizeable settlement — and an NDA about why she left — Amelia wakes up to discover her life is her own now. Problem is, she’s a workaholic who doesn’t know what to do when she’s off the clock.

When her sister convinces Amelia to throw her own 40th birthday party, it seems like a good idea — until no one shows up. No one, that is, except John Ellis, a new associate at her former firm. Their chemistry is immediate, the alcohol abundant, the sex sublime. And their insightful, if drunken, conversation leads to an epiphany for Amelia: It’s time to make amends for past transgressions.

Armed with a list of names (including old friends, ex-boyfriends, and former coworkers) and with John as her trusty, bemused sounding-board, Amelia sets off to apologize to everyone she’s ever offended or hurt. She discovers that not all her mistakes are as egregious as she believed, while also learning that some hurts won’t ever be forgiven — and that’s okay. Meanwhile, her connection with John morphs from sexy one-night stand into a real dating relationship, with one rule: He can’t talk about work. Of course, that’s easier said than done given her own rocky history with her old firm.

Impeccably put together and boasting a gorgeous apartment and closetful of designer clothes, Amelia has done everything right to have the career of her dreams. It’s only when she steps back that she realizes just how one-dimensional her life has become. John is positively dreamy, if a little cocky. But he shows up for Amelia in ways she’s never experienced, and she can’t help but wonder if he’s too good to be true.

Amelia is a flawed, messy delight of a character whose personal growth keeps pace with the developing romance. As she makes her apologies and crosses names off her list, she not only finds love and friendship, but she also learns to love — and forgive — herself. Author Jeanette Escudero has a winner with this enchanting tale.

Kristina Wright lives in Virginia with her husband, their two sons, two dogs, a cat, and a parrot. She’s the digital editor of Your Teen for Parents magazine, a regular contributor at BookBub, and a lifelong romance fan. Find her on Twitter at @kristinawright or on Bookshop, where she shares other reading recommendations.