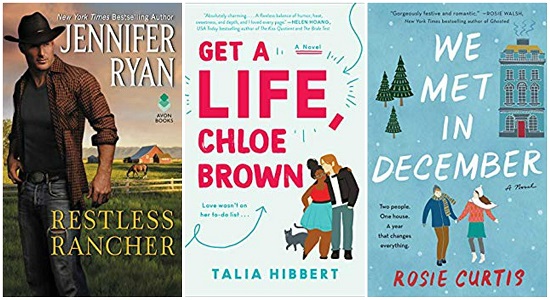 This year has been an incredible one for romance novels, and I’ve been lucky to share some of my favorites with you. As I look ahead to 2020 — and open packages of new titles already arriving on my doorstep — I’m excited to see what the coming decade brings for romance fans!

This month, amidst the hustle and bustle of holiday shopping, these are the books that reminded me why I love this genre. Wishing you all a beautiful holiday season filled with good memories and good books!

The wildly talented Jennifer Ryan is back with Restless Rancher (Avon), the second installment in her Wild Rose Ranch series. I kicked off 2019 with a review of the first book, Dirty Little Secret, and I wouldn’t typically review the second in a series, but I enjoyed Roxy and Noah’s story so much that I wanted to revisit the ranch. I’m happy to say the second book is as good as the first — and maybe even a little better.

Passed over for promotion, accountant Sonya Tucker is ready for a change — and she finds it when her sister, Roxy, extends an invitation to help rebuild a ranch and get it up and running again. It’s just the kind of challenge that Sonya needs, but she wasn’t expecting to have to rehab the ranch’s owner, too.

Austin Hubbard’s life has spiraled out of control to the point that he doesn’t recognize himself any longer. His girlfriend has left him, his family life is a volatile mess, his home is in shambles, and his dreams have slipped away. Sonya is the breath of fresh air (or pitcher of cold water) he needs to get back on track. But can these two very different people find a way past the obstacles standing between them and happiness?

Restless Rancher is Ryan at her finest — weaving a heartwarming, believable romance against a rugged Montana backdrop. Though it’s the second book in the series, it can be read as a standalone. As for me, I can’t wait to see how Ryan outdoes herself in book three.

Talia Hibbert takes the rom-com to the next level in her flawlessly brilliant, laugh-out-loud funny Get a Life, Chloe Brown (Avon).

Chloe Brown has fibromyalgia, and her chronic health issues have affected her life — and her relationships. She has a loving, devoted family, but she longs for more. So she makes a list and commits to experiencing all of the things she’s missed out on, which includes living on her own.

Chloe’s new apartment superintendent, Redford Morgan, is hot, handsome, and handy — but they comes from different worlds, and he’s not keen on her upper-class background. She watches him from afar (okay, she spies on him) until an encounter puts him in her path. Then she convinces him to help her with her list.

As Chloe and Red spend more time together, they reveal their insecurities and vulnerabilities and learn to have faith in themselves and each other. It’s easy to root for this pair of unlikely lovers — they both deserve a partner who appreciates all they have to offer.

Chloe is my favorite romance heroine of 2019, hands-down, and Red is the hunky artist hero I didn’t know I needed. Hibbert deserves all the praise for crafting a charming, believable interracial romance with a female lead who is funny, flawed, and utterly fabulous.

I wanted a book that would put me in the holiday spirit, and Rosie Curtis’ debut, We Met in December (William Morrow), fit the bill nicely. This is the book to read while sitting by a fire drinking tea. Yes, it’s that lovely.

The story follows a year in the life of Jess, a young woman pursuing her dream and moving to London, where she shares a house in Notting Hill with four flat mates. Alex is the guy who lives on her floor, and she is certain there is a connection between them — until she learns he’s dating Emma, who lives on the floor above them.

Alex gave up his legal career to pursue nursing and lost his girlfriend in the process. He’s not interested in a relationship, but he has a friends-with-benefits relationship with Emma. There’s a house rule about no fraternizing, so they keep things secret. Jess and Alex become pals, with Jess trying to maintain her emotional distance from the guy she thinks got away.

The situation gets complicated when Emma starts wanting more from Alex, but Alex doesn’t. By this point, Jess is dating someone else, and Alex is struck by the realization that he has feelings for her. The story spans a year, so the romance develops slowly and believably, with a terrific cast of secondary characters — and an enchanting setting — to help things along.

Curtis has a knack for writing realistic dialogue, and her scenes sing with authenticity. We Met in December is a quiet little romance that winds its way into your heart just as Jess and Alex wind their way through London.

Kristina Wright lives in Virginia with her husband, their two sons, a dog, a 6-month-old puppy, a cat, and a parrot. She’s the digital editor of Your Teen Magazine and a regular contributor to BookBub. Her work has appeared in a variety of publications, including the Washington Post, USA Today, Cosmopolitan, and more. Find her on Twitter at @kristinawright.