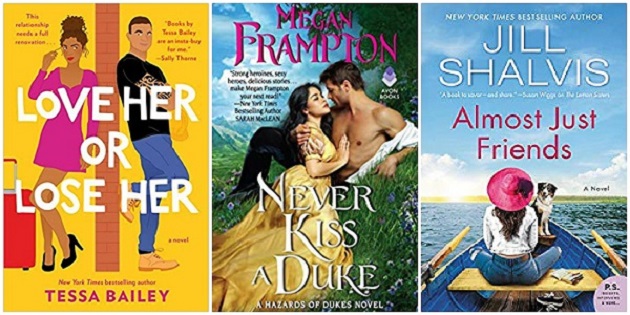 It’s February, and love is in the air. Of course, if you’re a romance fan like me, love is always in the air! When it comes to setting and plot, this month’s novels couldn’t be more different from each other. But they all have one thing in common: swoon-worthy love stories with happy-ever-after endings.

First up is Tessa Bailey’s terrific romantic comedy Love Her or Lose Her (Avon). This is Bailey’s second book in her Hot and Hammered series, following on the heels of one of my favorite romcoms, Fix Her Up.

Rosie and Dominic Vega were childhood sweethearts who married shortly after high school. Their chemistry is still as hot as ever, but there’s a growing emotional distance between them. Rosie is ready to change her life in a big way and wants to open a restaurant featuring the Argentinean food she grew up with. It should be an exciting time, but she’s worried about her marriage.

She gets Dominic to go to couples therapy, where their unconventional hippie therapist declares sex off-limits and nudges them to learn each other’s love language. The Vegas rediscover the closeness they’ve been lacking, and it seems like their issues might be resolving — until a complication throws them into a tailspin once again. Dominic has been keeping a secret from Rosie, and now it’s come back to bite him and challenge their newfound connection.

It’s not often that we get to see the work that goes into maintaining a happily-ever-after ending, and rarer still to see a long-married couple recommit to each other. Rosie and Dominic’s story is a special treat for readers like me who think married folks deserve romance, too!

Bailey never fails to delight, and her story is filled with personable characters and interesting subplots. There’s plenty of steamy moments, too, and they balance the humorous twists. Love Her or Lose Her is a frothy, fun romp perfect for readers who know their love language and still send Valentines.

Sebastian de Silva, Duke of Hasford, learns his title is just a sham because his parents weren’t legally married. Everything he thought he knew about himself was a lie. Rocked by this news, and divested of everything he believed he was entitled to, Sebastian does what any average man would — he visits the nearest gambling house.

Ivy Holton is the alluring owner of Miss Ivy’s, a notorious poker den, and Sebastian is immediately smitten. She is equally attracted to the gorgeous rake, but Ivy has her own issues with aristocracy, having refused to marry a man who won her hand in a wager with her father.

No longer a duke, and needing gainful employment, Sebastian takes a job working for the fiercely independent Ivy — putting them in close quarters and testing their resolve to maintain a professional distance. Naturally, it doesn’t work. Romance blossoms, challenging them both to rethink who they are and what they want out of life.

Despite its Victorian London setting, Never Kiss a Duke reflects contemporary relationship issues in an interesting and compelling way. Ivy and Sebastian are ideally suited for each other, with both of them determined to live life on their own terms and overcome any obstacles on their way to happiness. Frampton’s new series promises to be as endearing and romantic as her previous books.

EMT Piper Manning has practically raised her younger siblings, Gavin and Winnie, but now they’re grown, and she’s ready to move on with her own life. While she’s in the midst of making plans to sell the lake house their grandparents left them, Gavin and Winnie return to help her celebrate her 30th birthday. But then her siblings decide to stay to sort out their personal issues — problems they don’t want to share with big sister Piper, even though they need her support.

Meanwhile, the neighbor’s visiting son is proving to be another, albeit more enjoyable, distraction for Piper. Camden Hayes is a DEA agent whose younger brother, Rowan, was recently killed in a car accident. There’s an attraction between Piper and Cam, but they’re both sorting out their lives, and Piper is reluctant to get too close to Cam while trying to establish her independence and pursue her own dreams. Things become increasingly complicated when Cam is asked to keep a secret from Piper even as their relationship heats up.

Shalvis has a knack for crafting characters we believe in and root for. Piper and Cam each have a full plate of familial obligations and commitments, but in the midst of all that, they found each other. They deal with their issues in a mature, realistic way while making the leap to building a relationship. Their charming romance, interesting secondary characters, and the tranquil setting make Almost Just Friends a comforting, warmhearted read.