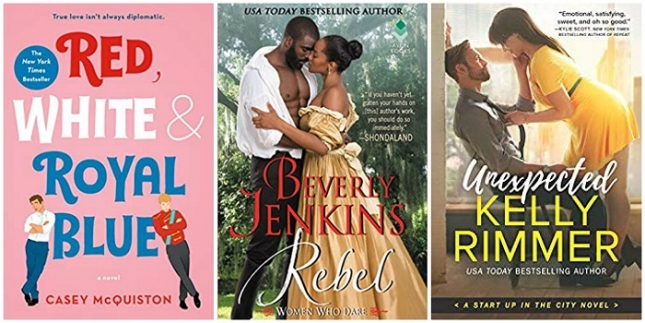 Summer has arrived! This is the time of year when I have more time to read, which means I’m usually reading more than one book at once! These were my favorites this month — great for the beach, by the pool, or just a late night when the house is quiet and you aren’t quite ready to go to bed.

Alex Claremont-Diaz is the son of Ellen Claremont, the president of the United States. Prince Henry is the heir to the British throne and Alex’s nemesis. Their rivalry goes a little too far when they manage to cause a scandal at a royal wedding, resulting in a wrecked cake, a potential international incident, and an ultimatum: Be friends.

Alex and Henry agree to a truce and spend some time playing nice together for the sake of the media. Before long, Alex comes to realize that he’s actually — gasp! — attracted to Henry. Even better, the feeling is increasingly mutual. Soon, they’re sneaking off together, but it’s only a matter of time before their secrets are revealed.

McQuiston is a talented storyteller, and her brilliant debut makes her an author to watch. This charming boy-meets-boy, enemies-to-lovers story takes a popular romance subgenre and give it a whole new sexy twist. Alex and Henry are wonderful together, and how they overcome the obstacles standing in the way of their happiness is nothing short of storybook magic!

Beverly Jenkins is back with Rebel (Avon), the first book in her Women Who Dare series, set in the aftermath of the Civil War.

In 1867, New Yorker Valinda Lacy travels to Louisiana with the intention of educating the former slaves of New Orleans. Right from the start, her plans go awry in every possible way as a series of racially charged incidents threatens her mission and her life.

Val is a strong-willed and determined young woman, which wins her the attention and admiration of Drake LeVeq, an architect with his own admirable goals of rebuilding the city. Drake is a swoon-worthy hero who steps in to help Val when she’s attacked, and he becomes her protector. Their attraction is powerful, but Val is not only engaged to someone else, she’s wary of indulging her feelings for Drake and losing her independence.

Jenkins strikes just the right note with Rebel, building a richly detailed world that balances the painful realities of Reconstruction-era New Orleans with the pursuits and passions of her characters. Val and Drake bring out the best in each other, and their relationship develops in a slow and believable way.

Jenkins is one of romance fiction’s most beloved authors, and Rebel is a fabulous start to her highly anticipated new series.

Can best friends become co-parents without ruining their friendship? It’s a trope we’ve seen before, but Kelly Rimmer pulls it off beautifully in Unexpected (HQN).

Abigail Herbert has her life planned down to the last detail. She’s a successful video-gamer with a dream job, a fabulous apartment, and awesome friends. She also longs to be a mother someday. When she finds out she has a genetic condition that affects her fertility, she realizes “someday” has become right now, and it’s time to make her dream come true.

Of course, it’s a little difficult to become a mother without a partner, but that isn’t going to stop Abby. She’s a modern woman who can manage motherhood on her own — all she needs is a sperm donor. Luckily, she knows just the man to help her!

Enter Marcus Ross, a tech entrepreneur and Abby’s lifelong best friend and roommate. He also happens to be in love with Abby, but he doesn’t want to wreck their bond. Of course he’s going to help Abby achieve her dream of becoming a mother, but he has no intention of letting her go it alone.

Commitment may not be his strong suit, but Marcus decides that he is going to be a father to his child. Co-parenting should be easy for these best friends, but they underestimate their ability to keep their feelings, and their desire for each other, under control.

Clever, breezy writing makes Unexpected an unexpectedly delicious summer treat, with two likable and interesting people at the center of this friends-to-lovers tale. Rimmer’s thoroughly modern angle on old-fashioned romance is the ideal launch book for her new contemporary series, Start Up in the City.

Kristina Wright lives in Virginia with her husband, their two sons, a dog, a cat, and a parrot. She’s the digital editorial manager of Your Teen Magazine and a regular contributor to BookBub. Her work has appeared in a variety of publications, including the Washington Post, USA Today, Cosmopolitan, and more. Find her on Twitter at @kristinawright and tell her what you’re reading this summer!