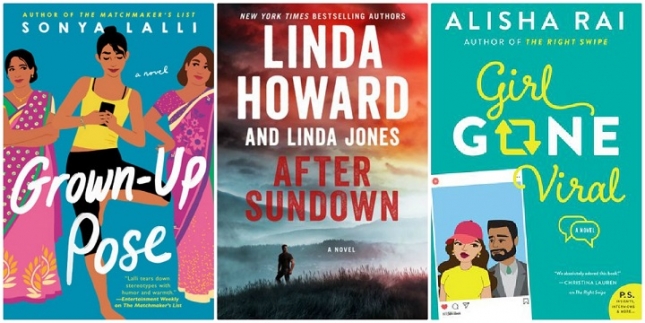 May has always been my favorite month. It’s not only my birthday month, it’s also that magical time when everything in the garden is in bloom. This month, like so many people, I’m spending most of my time at home — working, homeschooling, and, inexplicably, baking a lot of bread.

After several weeks of being too consumed by the news to lose myself in reading fiction, I’m choosing to pick up a book more often than not these days, which is such a relief! Here are a few of the books that recently captured my frazzled imagination.

Growing up is hard to do, especially when you’re not doing it on your own terms. Sonya Lalli follows her charming 2019 debut, The Matchmaker’s List, with Grown-Up Pose (Berkley), a heartwarming and honest tale of a woman finding herself.

Anu Desai has done everything right. At 30, she is a wife, mother, and nurse, a good daughter among her traditional Indian community in Vancouver. She has exactly the life her loving parents envisioned for her — and she’s desperately unhappy.

After 10 years of marriage, she shocks her family by asking her husband, Neil, for a separation. She’s determined to be a good mother to their daughter, Kanika, while breaking free from the expectations of others. But it’s easier said than done.

Anu’s newfound freedom brings all of the experiences she missed out on by marrying young. But her walk on the wild side has brought more hurt and confusion than joy and liberation. Dating, traveling solo, getting drunk, and investing in a yoga studio all feel like freeing choices in the moment, but each one gives Anu an unexpected perspective.

While Grown-Up Pose is probably better categorized as women’s fiction than romance, the love story between Anu and Neil is a poignant and honest portrayal of marriage, filled with the complexities that come with building a long-term relationship. Anu’s relationships with her supportive and understanding parents is also lovely to watch as she navigates away from her good-girl image and grows into the adult she wants to be. As it turns out, who Anu wants to be may not be so different from who she already was.

Linda Howard and Linda Jones have collaborated on one of the best romantic thrillers to come along in a while. After Sundown (William Morrow) is the perfect accompaniment to sheltering in place. (And it will make you better appreciate the perks of having electricity, running water, and Netflix!)

Former Marine Ben Jernigan is the kind of rugged survivalist you want on your side during a disaster. He keeps to himself in his small East Tennessee mountain town, but he offers Sela Gordon — the quiet, introverted owner of the local general store and gas station — an ominous warning. He tells her a solar storm is coming that will take down the global power grid and advises her to prepare for the worst.

Sela isn’t sure she should believe Ben’s wild assertion — after all, outages happen often in the mountains — but she wisely sets aside some supplies and prepares for a potential, but unlikely, disaster. Naturally, Ben knew what he was talking about, and the worst soon comes to pass: The power grid goes down and the entire town faces the uncertainty of months, or longer, without electricity.

Both strong-willed and independent, Sela and Ben are soon working together to keep everyone safe and calm. As they deal with the crisis and the potential dangers from within their community, a slow-burning attraction grows between the two. Authors Howard and Jones have crafted a steamy, riveting tale where romance and natural disaster go hand in hand!

Girl Gone Viral (Avon) is Alisha Rai's second book in her Modern Love series, and it’s just as clever and romantic as its predecessor, The Right Swipe.

Katrina King is a reclusive former model turned angel investor who is ultra-protective of her privacy. She escaped an abusive family situation by marrying a wealthy older man, which, in turn, led her to becoming a very wealthy widow.

When an innocent coffeeshop chat leads to a viral social-media post with its own hashtag, it catapults Katrina back into the limelight she loathes. Her social anxiety gives way to emotional distress and potential real-life danger, leaving her desperate to escape.

Enter bodyguard Jasvinder “Jas” Singh, Katrina’s unrequited crush. (Or is he?) A former soldier dealing with PTSD, Jas plays the dashing hero when he offers Katrina his family’s farm in Northern California as a safe place to get away from the media frenzy. As luck would have it, Jas has as much of a crush on Katrina as she has on him, and one electrifying kiss sets them on an unexpected path to romance, even while the world is trying to find them.

Rai beautifully captures the complications of living — and loving — in the era of social media. She deftly handles Katrina and Jas’ mental-health issues as a part of their developing romance, with the protagonists offering each other the kind of supportive, unconditional love they both need. Girl Gone Viral is a heartfelt, feel-good romcom that highlights Rai’s knack for balancing believable, fully-realized characters with sizzling modern romance.

Kristina Wright lives in Virginia with her husband, their two sons, two dogs, a cat, and a parrot. She’s the digital editor of Your Teen for Parents magazine and a regular contributor to BookBub. Her work has appeared in a variety of publications, including the Washington Post, Huffington Post, USA Today, and more. Find her on Twitter at @kristinawright.