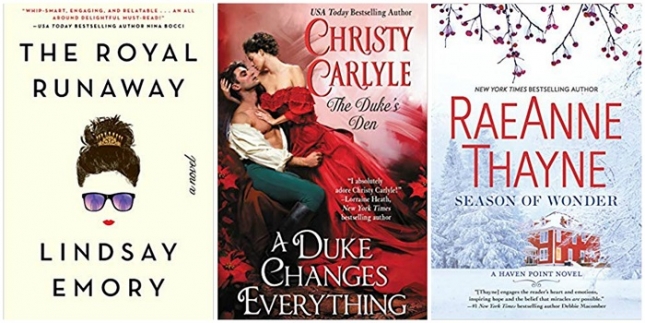 December has arrived, and everything is merry and bright! I love this time of year, not only because the cold weather makes me want to hibernate (and read), but also because it’s gift-giving season! There’s nothing better than being able to give my favorite books! This month, I’m highlighting romance novels that would make lovely presents — but I won’t tell if you decide to keep them for yourself!

For the reader who loves a romantic comedy with more than a dash of mystery and adventure, there’s The Royal Runaway (Gallery Books) by Lindsay Emory.

Princess Theodora — in line to the crown of Drieden, a small fictional country off the coast of mainland Europe — was jilted on her wedding day by fiancé Christian. After spending a few months on the remote island of Perpetua, she returns to Drieden to deal with the fallout from the scandal. She crosses paths with a Scotsman named Nick, who just happens to be Christian’s brother, and the two team up to find out what happened to Christian. Not everything is as it seems in this rollicking read, but that’s half the fun.

Thea’s marriage to Christian was to be one of practical convenience, so it isn’t long before a romance develops between Thea and Nick. Nick isn’t entirely forthright with Thea, which makes for some trust issues to sort through as the pair hunt for the connection between Christian’s disappearance and a more complicated situation Nick is working on. How Thea and Nick get to their happily ever after makes for a charming read.

Emory has done a great job building the kingdom and history of Drieden, and the secondary characters are memorable and entertaining. This princess tale has a strong-willed heroine who really comes into her own in a story that is a familiar fantasy with a refreshing twist.

For the historical romance fan, there’s A Duke Changes Everything (Avon), the terrific first installment in a new Victorian series by Christy Carlyle.

Nicholas Lyon put aristocratic life behind him long ago, choosing to survive on the streets rather than live at the mercy of his abusive father, the Duke of Tremayne. Nick is the cold and ruthless owner of a popular London gambling house, but now that both his father and older brother are dead, he is also the new Duke of Tremayne. He returns to his family home, Enderley Castle, intent on divesting himself of the estate and putting his past behind him for good.

Mina Thorne has been the devoted steward of Enderley Castle for two years, ever since the death of her father, the former steward. She welcomes Nick to Enderley, distraught over the possibility of losing her job, as well as her home. She’s hoping she can convince Nick to see his ancestral home in a new light so that he’ll want to stay. Nick’s dark past left him scarred inside and out, but his time with Mina reveals a strong mutual attraction that blossoms into a delightfully tension-filled romance.

Nick is a proper tortured hero, admirable for the way he’s overcome the trauma of his life to build a successful career, but emotionally closed off and bitter about the past. Mina has her own issues with the past and has to come to terms with the reasons she feels so committed to Enderley. Carlyle’s secondary characters are well drawn, and the plot is solid. This is a lovely story about two people who find the kind of love neither of them imagined they’d ever have.

For the reader who loves a small-town romance, no one does it better than RaeAnne Thayne in Season of Wonder (HQN), the ninth book in the Haven Point series. And you don’t have to read the previous books to enjoy this new installment!

Veterinarian and single mom Dani Capelli grew up in foster care and hasn’t had an easy life, so she’s just a little bit (okay, maybe a lot) cynical. Haven Point seems like a good place to start over with her two daughters, 13-year-old Silver and 6-year-old Mia.

Haven Point deputy sheriff Ruben Morales is Dani’s handsome and friendly neighbor, as well as the son of Dani’s supportive mentor, Dr. Morales. Ruben is wildly attracted to standoffish Dani, while Dani’s focus is on her daughters and rebuilding their life.

She doesn’t have time for romance — no matter how sexy, kind, and helpful Ruben may be. While Dani won’t give Ruben the time of day, little Mia takes to him immediately, and Ruben looks out for Silver, who is going through some teen angst and not adjusting well to life in Haven Point.

As Dani spends more time with the Morales family and sees how protective and caring Ruben is with her kids, she finds her resolve softening. Filled with the small-town charm and delightful characters Thayne is known for, Season of Wonder delivers the perfect Christmas romance.

Kristina Wright lives in Virginia with her husband, their two sons, a dog, a cat, and a parrot. Her work has appeared in a variety of places, including the Washington Post, USA Today, BookBub, Simplemost, and more. Find her on Twitter at @kristinawright and tell her what you’re reading this winter!