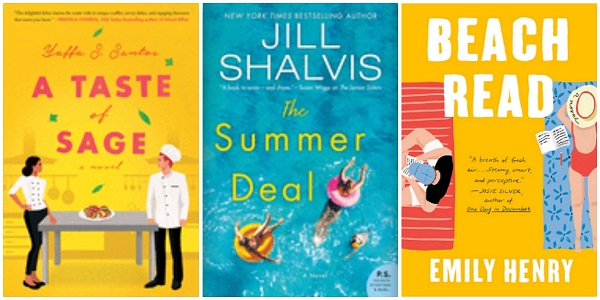 Summer has arrived, and while it may not look anything like summers past, one thing remains consistent: I’m buying more books than I possibly have time to read. Here are a few of the romance novels that kept me turning pages recently.

I love a good culinary novel, and Yaffa S. Santos’ A Taste of Sage (Harper Paperbacks) proved to be a delicious and unexpected offering. (Bonus: There are recipes!)

When her own Manhattan restaurant fails, Dominican chef Lumi Santana takes a job as the sous chef at Julien Dax’s eponymous French restaurant, DAX. Despite his formidable and reserved personality, Julien is a meticulous chef with high standards. Unfortunately, Lumi’s experimental and eclectic style is the complete opposite of Julien’s traditional cuisine. The two immediately fall into conflict, with neither willing to budge.

Santos brings a magical-realism twist to the story by giving Lumi an unusual gift: She has a form of synesthesia that allows her to perceive someone’s emotions when she tastes their cooking. Tasting Julien’s exquisitely prepared recipes is like getting inside his heart, and Lumi is startled by the powerful emotions she experiences through his food.

She finds herself craving every delectable new dish he turns out — as well as longing to get closer to the man himself. Getting a real sense of who Julien is beneath his brittle exterior helps facilitate their blossoming attraction, but what about Lumi’s goals for her own career?

Lumi and Julien are an interesting, creative, and talented pair who have more in common than they’re willing to admit. Lumi is initially put off by Julien’s abrasive personality, and Julien has never experienced a whirlwind of creativity and flair like Lumi brings to his restaurant. Santos has a terrific sense of comedic timing and does a lovely job of pacing the story. A Taste of Sage is a terrific debut novel offering an enemies-to-lovers plot with a heaping helping of humor and heart.

Two authors trying to get their writing careers back on track find a new perspective on life — and love — in Emily Henry’s captivating Beach Read (Berkley).

January Andrews is a romance novelist who has given up on the idea of her own life having a happily-ever-after ending. It’s been a year since her father’s death, and she’s still coping with the bombshell of his extramarital affair while also mourning the loss of her own relationship. She heads to North Bear Shores, a small town in Michigan, hoping to clean and sell her father’s lake house while getting her next book written.

Throwing a wrench into her summer plans is Augustus “Gus” Everett — January’s former college rival and crush who has become a celebrated literary novelist. Despite his golden-boy literary success, Gus is struggling with his writing and carrying more than his share of personal baggage. He is also January’s next-door neighbor for the summer.

After some back-and-forth snark and bickering, the two hit upon a way to help one another with their summer goals: They’ll teach each other how to write in the other’s style. Gus will spend the summer crafting an upbeat romantic comedy, while January will take a stab at a literary novel worthy of the high-brow accolades Gus has collected.

Soon, January and Gus rediscover their passion for writing as they fall in love with each other. How they get there is half the fun, and there is humor aplenty. But there’s also a poignancy to this romantic summer tale that makes Beach Read a unique and memorable novel.

Jill Shalvis’ The Summer Deal (William Morrow) features a different kind of frenemies. This heartwarming tale centers on two half-sisters but is packed with charm and romance.

Looking for a fresh new start, Brynn Turner heads back to her hometown of Wildstone, California, and her two loving, supportive moms. Brynn wants to get her life back on track, but she goes from the frying pan into the fire when she runs into her old crush, Eli Thomas. Eli is just as handsome and charming as he ever was, so when he offers her a room in his beach house, Brynn accepts. She soon finds herself agreeing to let Eli steer the course of her summer.

There’s only one problem: Kinsey Davis, Brynn’s former nemesis, is Eli’s roommate and best friend. Beneath Kinsey’s tough exterior is a lifetime of health issues, and her pain is only exacerbated when a lifesaving kidney transplant falls through. Kinsey has known for years that she and Brynn are half-sisters — information that she’s shared with Eli, though not with Brynn.

Both sisters find unexpected love while sorting out other aspects of their lives. Living in close quarters not only sets the stage for Eli to intervene on the sisters’ behalf, it also gives Brynn and Eli a chance to fall in love. For her part, Kinsey’s health struggles have made her push everyone away — but that doesn’t stop Deck Scott, a single father who is also Kinsey’s dialysis nurse, from trying to get closer to her.

Despite their differences, Brynn and Kinsey are both strong-willed, independent women trying to live their lives on their own terms, and the resolution is one of laughter and tears. Shalvis’ fifth book in the Wildstone series works perfectly well as a standalone, although fans of the series will enjoy revisiting some of the returning characters.