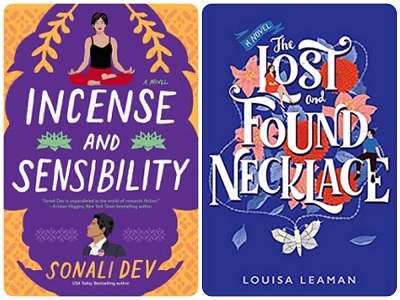 August? How did that happen? I know we’re in the throes of the dog days of summer, but I’m already looking forward to my kids starting school, the weather turning cooler (eventually), and having a little more structure to my days. Until then, I’m cramming in as much reading time as I can. Enjoy the rest of your summer!

Sonali Dev has become an auto-buy author for me, and she’s back with another fabulous Jane Austen retelling in Incense and Sensibility (William Morrow).

Ambitious, handsome, charming, and privileged, Yash Raje is California’s first Indian American gubernatorial candidate — and he won’t let anything get in the way of his success. He lives by the mantra “If you control your feelings, you can control the world.” But Yash realizes that control is only an illusion when a hate crime at a political rally leaves his friend and bodyguard, Abdul, fighting for his life. Yash is so shaken by the traumatic experience that it threatens to end his campaign.

Family friend, yoga therapist, and stress-management coach India Dashwood steps in to help Yash cope with his anxiety and get him back on the campaign trail before the media finds out he’s struggling. She has worked with all sorts of clients in San Francisco, but working with Yash means addressing issues in his past, including their brief encounter 10 years earlier. The attraction between them still lingers, but Yash can’t risk letting anything get in the way of his political ambition.

Dev deftly handles issues of racism, gun violence, and trauma in this third book of her series of Austen adaptations. Readers who have read Dev’s previous books, Pride, Prejudice, and Other Flavors and Recipe for Persuasion, will be delighted to revisit the Raje family, but new readers will also enjoy this heartwarming tale of two people finding love — and all the messy realness that entails.

Jess Taylor lived a life of adventure and risk — until a terrible accident left her with chronic pain and injuries that require the use of a cane. Now living with her sister’s family, Jess is taking a more cautious approach to life and contemplating marriage to her dependable (but boring) boyfriend, Tim. That is, until her ailing grandmother Nancy sends her on a mission to reclaim a long-lost family heirloom.

In Louisa Leaman’s The Lost and Found Necklace (Sourcebooks Landmark), the missing necklace is more than just a piece of art-nouveau jewelry with sentimental value — it was designed by Jess’ great-great grandmother Minnie. Legend has it that the beautiful butterfly and moonstone pendant has magical powers that have helped the women in the Taylor family find their one true love. The necklace went missing years ago and has since turned up in a London auction catalog.

Despite her best efforts, Jess is outbid by a handsome stranger she nicknames Curly-Sparkle. His real name is Guy Van der Meer, and he’s a jewelry buyer with his own reasons for wanting the vintage necklace. Captivated by Jess’ fiery spirit, Guy makes her a deal: He’ll give her the necklace in exchange for having dinner with him. But Jess, resisting the allure of this dashing stranger, refuses.

Fascinated by the origins of the necklace, as well as its magical reputation, Jess starts researching her family’s history and learns a lot about her ancestors and herself. As Nancy’s health deteriorates, Jess finds herself willing to take a chance on Guy — and discovers that her plans to play it safe might have been a mistake.