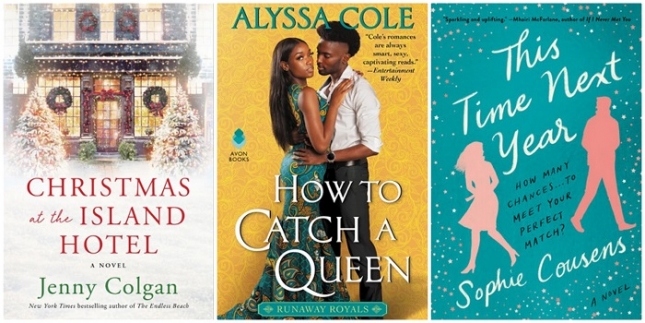 As we wrap up this strange, surreal year, I can’t help but think 2020 wasn’t at all what I expected — or what any of us expected, really. There were no big family trips, no weekly coffee dates with friends, no new dining adventures with my husband.

But the year wasn’t a total wash for me. It brought more writing, more introspection, more family time, more opportunities to slow down and just breathe. This year also brought more reading — so much reading! Here are some of my favorite reads this month — books I think would make great gifts for the romance reader in your life (or yourself).

Wishing you all a joyous winter and a peaceful new year.

In Christmas at the Island Hotel (William Morrow), author Jenny Colgan takes readers back to the charming Scottish island at the center of several of her previous novels.

On the cozy little island of Mure, halfway between Scotland and Norway, a grand new hotel is opening, and a flurry of Christmas preparations is underway. The hotel is a labor of love for Flora MacKenzie and her grieving brother, Fintan, who inherited the property from his partner, Colton. As with all of Colgan’s novels, there are quirky characters aplenty, and the descriptions of the hotel and the friendly people of Mure will leave readers with more than a touch of wanderlust.

Amidst the goings-on of the hotel staff and locals, a budding romance begins in the kitchens. Isla Gregor works hard for a living and loves her island home, yet she can’t help but imagine a different life for herself. She develops a friendship with coworker Konstantin Pederson, but as their relationship blossoms, it becomes clear Konstantin isn’t exactly who he appears to be.

As it turns out, Konstantin is hiding a pretty big secret: He’s the son of a Norwegian duke, sent to Mure to learn a lesson in maturity and hard work before being given his inheritance. Konstantin’s intention is to do the job and move on with the life he was born to, but he soon develops a fondness for the people of Mure and for Isla, in particular.

This is the fourth book in Colgan’s Mure series, and while it can be read as a standalone novel, readers who are familiar with the previous books and characters will find even more to love. As with all small towns, there are secrets and gossip aplenty, which adds a bit of drama to the holiday festivities while highlighting the stories of some of the main characters from the series.

Christmas the Island Hotel is as frothy and delicious as homemade hot chocolate — and a perfect holiday read. While Colgan’s novels are more women’s fiction than romance, this is a sweet, heartwarming tale of a community coming together during the holidays that will appeal to romance fans, as well.

Alyssa Cole’s Runaway Royals series is off to a fabulous start with How to Catch a Queen (Avon), set in the fictional African kingdom of Njaza.

King Sanyu II of Njaza is in need of a queen — and Shanti Mohapti is up to the task. Despite the spark of attraction between them, they are nearly opposites in every way, and their arranged marriage seems destined to be little more than a business transaction. That is, until they get to know each other.

Shanti has always wanted to be a queen, and now that she has the opportunity to assume the mantle, she’s determined to be more than arm candy to her new husband. She’s educated, self-assured, and politically astute — qualities that make her an excellent leader. Unfortunately, Sanyu doesn’t know what to make of this beautiful, ambitious woman who can hold her own in any room. He lacks Shanti’s confidence and longs for a love match, but does he have what it takes to romance his new wife and build a real marriage?

Because they spend their days apart, it takes time for Sanyu and Shanti to acknowledge the growing feelings between them. The terrific secondary characters and political subplot help propel the story forward as the likable protagonists navigate their complicated relationship and the issues facing their kingdom.

How to Catch a Queen is beautifully written, and Cole has turned a familiar trope into something that’s a pure delight to read. Runaway Royals promises to be an entertaining, groundbreaking series.

Sophie Cousens’ This Time Next Year (Putnam) is a clever, thoughtful novel about missed connections and second chances that centers on two very different people who share a birthday.

Minnie Cooper and Quinn Hamilton were born in the same hospital just after midnight on January 1, 1990. Quinn arrived only a minute before Minnie, marking his birth as the first of the New Year and earning his family a cash prize. From that celebratory beginning, he grows into a happy-go-lucky fellow who loves celebrating his birthday — unlike Minnie, who feels hers has brought her nothing but bad luck from the very beginning.

Minnie and Quinn meet on their 30th birthday when Quinn rescues her from a locked bathroom after a disastrous New Year’s Eve party. Minnie’s life seems to be falling apart both personally and professionally, with her business failing and an eviction looming. Quinn steps in again to play the hero — much to her frustration, as she has spent three decades resenting the boy who was born just a minute before her.

Romance is slow to blossom for these two birth mates, but when it happens, it seems as if it was meant to be. The story flashes to previous years, highlighting the different paths their lives have taken, as well as the many times they’ve unknowingly crossed paths. The story unfolds in quirky and unexpected ways, with enough poignancy and nostalgia (and wacky supporting characters) to make the plot both memorable and film-worthy — a testament to the author’s background in television.

This Time Next Year is a charming holiday tale that strikes just the right note and makes it the perfect read at the end of a difficult year.

Kristina Wright lives in Virginia with her husband, their two sons, two dogs, a cat, and a parrot. She’s the digital editor of Your Teen for Parents magazine and a regular contributor at BookBub. She’s also the author of The Big Book of Infectious Disease Trivia (Ulysses Press, January 2021). Find her on Twitter at @kristinawright or Bookshop, where she features other book recommendations.