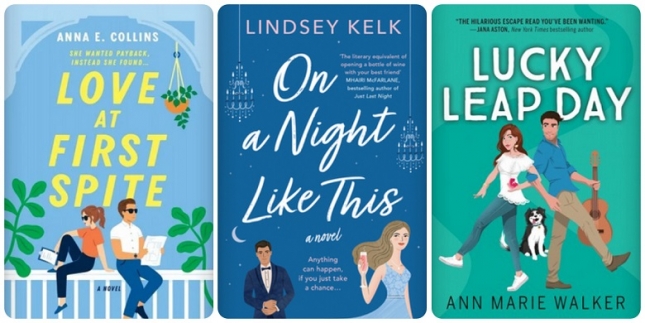 It’s February, which means romance is in the air — whether we like it or not. I’ve come to realize that not everyone does. In fact, some people are downright snide when I mention my love of all things romantic. But love stories are life stories, and they can teach us a thing or two about what we want, what we deserve, and the power of knowing our own hearts. On that sappy note, here are some romance novels I’ve really enjoyed recently. Happy reading!

What’s a girl to do when her fiancé cheats on her with their realtor? Buy the tiny lot next door to the cheater and build a spite house, of course! The premise for Anna E. Collins’ debut novel, Love at First Spite (Graydon House), will appeal to anyone who’s been on the wrong side of love.

Dani Porter is an interior designer who was heading for her happy-ever-after when her fiancé, Sam, derailed everything. Now she’s out for revenge and needs architect Wyatt Montego to see her plan to its bitter end. She’s going to build a new house and turn it into an Airbnb that will remind Sam of his betrayal — and her — every time he sees it.

Wyatt is gruff and distant, but his skills are a means to Dani’s vengeful end. The more time they spend together, though, the more Dani begins to see beyond the curmudgeonly exterior to the real Wyatt. And she discovers she really likes the real Wyatt.

Collins delivers a delightful story of love lost and found again in this clever, contemporary romantic comedy. Dani’s revenge plan, while extreme, puts her back in control of her own life. But at what cost? Wyatt is a terrific counterbalance, reminding Dani that dwelling on what she lost could mean losing out on something new that’s even better.

In Lindsey Kelk’s On a Night Like This (HarperCollins), a temporary gig as an assistant to a famous singer sounds like a dream job for Fran Cooper. Spending a week on a yacht in the Mediterranean and attending a fancy charity ball on an Italian island is a far cry from being stuck in the suburbs of rainy London with her cheating fiancé, Stew. And that’s exactly how Fran feels — stuck. She’s ready to change her life, and this opportunity is too good to resist.

Things go awry when the pop star bails, and Fran ends up crashing the Crystal Ball dressed to the nines in a borrowed gown and rubbing elbows with the rich and famous. It’s a Cinderella story come true, and there’s even a Prince Charming — tall, dark, and handsome American Evan Carter. Their connection is irresistible, but Fran will be returning to her boring life soon — one that includes a husband-to-be. But can she walk away from Evan after he’s made her feel things she’s never felt before?

Kelk’s delightfully over-the-top tale is pure fantasy romance. Fran is a relatable heroine who has put her dreams on the backburner for too long and deserves to have them finally come true. Evan is a gentleman in every sense of the word, and readers will root for Fran to take a chance and change her life. The wonderful secondary characters add depth to the story as Fran tries to figure out what (and whom) she really wants.

Things go hilariously wrong when aspiring screenwriter Cara Kennedy decides to travel solo on the Ireland vacation her ex-boyfriend had planned for them. Handsome Uber driver/musician Finn Maguire proves to be the silver lining of her trip — and she eagerly accepts his invite to a Leap Day celebration at a Dublin pub. Everything’s great until Cara ends up drunkenly, impulsively married to him thanks to a lot of whiskey and an old Irish tradition that says women can propose to men on February 29th.

Cara must return to California after her brief trip, but in order to have their marriage annulled, she has to bring Finn (and his dog) with her. Apparently, it’s easier to get married than divorced, so Cara and Finn have plenty of time to get to know each other — and maybe even fall in love.

Cara’s holiday spontaneity could be the luckiest break she’s ever gotten, but complications arise when she begins to question Finn’s motives. Will their love story continue after the credits roll? Walker’s meet/marry-cute tale is filled with plenty of old-fashioned Irish heart and Hollywood charm.