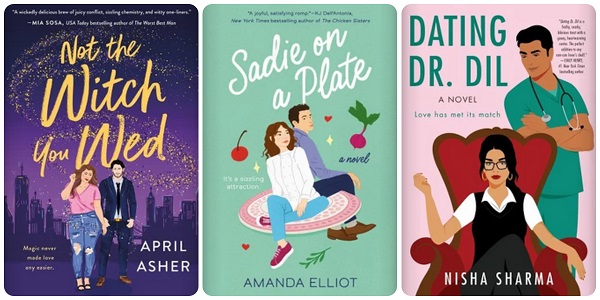 Winter is firmly behind us, and I’m looking forward to all that spring has to offer (except pollen; I don’t look forward to yellow-covered everything and the allergies that go along with it). This spring is exploding with exciting new romance novels that put fresh spins on favorite tropes and deliver unexpected and believable love stories. Here are some of my recent favorites.

Not the Witch You Wed (St. Martin’s Griffin) is the first book in April Asher’s Supernatural Singles trilogy and it’s filled with all the charm, magic, and wit that I could want in a paranormal romance.

Violet Maxwell, granddaughter of a powerful witch, is the eldest of triplet sisters and the only one without magical abilities. She’s made her peace with her lack of powers and is content to let sisters Rose and Olive claim the attention. Unfortunately, Vi is still bound by ancient supernatural law to find herself a mate ASAP.

Lincoln Thorne is a wolf shifter and the alpha of the North American Pack, which means he’s also under a lot of pressure to find a mate. Agreeing to a fake relationship seems like an easy way for Vi and Linc to buy themselves some time with the supernatural community elders, but the situation is complicated by past heartache, newfound feelings, and the sudden appearance of Vi’s wayward magical abilities.

Trying to change the arcane laws of their world while navigating modern life as supernatural beings is no easy task, especially as their relationship heats up. Linc is a swoon-worthy shapeshifter intent on doing what’s right by his pack, while Vi is a genuinely goodhearted person who simply wants to live life on her own terms. With plenty of snarky humor, steamy passion, inventive worldbuilding, and terrific secondary characters, this second-chance romance is a delightful standout filled with heart and humor.

Amanda Elliot’s debut, Sadie on a Plate (Berkley), is a foodie’s dream of delectable cuisine and entertaining competition at the center of a piping-hot romantic comedy.

Up-and-coming Seattle chef Sadie Rosen has recently lost both her job and her boyfriend, and she’s anxious to put her public failures behind her. Then she lands a lucrative gig as a competitor on the television show “Chef Supreme.” It’s an opportunity that could change everything for Sadie and allow her to showcase her unique spins on traditional Jewish recipes.

On the way to New York to film the show, she hits it off with half-Korean chef Luke Weston, and they bond over favorite recipes from their backgrounds. Their connection is fleeting but intense, and Sadie looks forward to seeing Luke again after the competition has completed filming. Things get complicated when she walks onto the “Chef Supreme” set and learns Luke is the new judge. With their attraction sizzling beneath the surface, Sadie can’t risk losing her place on the show, but she can’t deny her feelings for Luke, either.

Sadie and Luke share an interest in bringing beloved meals from their respective cultures to mainstream attention. It’s a pleasure to watch them share their passion for food with each other, along with mouthwatering descriptions of favorite dishes. Elliot does a terrific job exploring the ins and outs of restaurant culture and reality TV in this page-turning romcom, and the resolution is satisfying and delicious.

Dating Dr. Dil (Avon) is a wickedly entertaining interpretation of Shakespeare’s The Taming of the Shrew and the first book in Nisha Sharma’s If Shakespeare Was an Auntie series.

Thirty-year-old Indian American Kareena Mann wants to hang onto her mother’s family home — the one her father intends to sell — but her meager savings won’t make it happen. With everyone in her South Asian community hounding her to get married, Kareena ponders her father’s suggested solution: Get engaged, and he’ll give her the house. Now Kareena is on a mission to find her soulmate. Unfortunately, the only man on her radar is someone she doesn’t want.

Dr. Prem Verma, handsome host of the “Dr. Dil Show,” is more interested in funding his community health clinic than falling in love. When his plans are derailed thanks to a viral video of him arguing with Kareena, his own relatives offer to fund his clinic if he convinces Kareena they’re meant to be together. It’s hardly an ideal situation for either of them, but a fake relationship offers the financial resolution they both want. So, a pact is forged, animosities are put aside, and a fake romance begins…

Sharma has crafted a promising and memorable series launch with Dating Dr. Dil. Kareena and Prem are destined to be together, but they can’t see the forest for the trees. After a lifetime of navigating familial and cultural expectations while pursuing their own dreams, they might find a kindred spirit in each other. It will just take time — and maybe a little meddling.