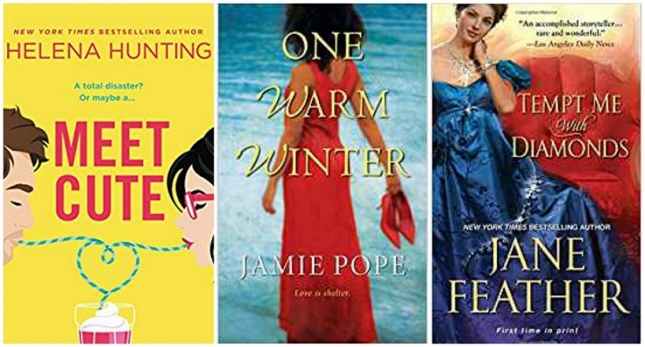 Spring has sprung, and romance is in the air! These are my favorite romance novels this month.

Helena Hunting’s Meet Cute (Forever) is as charming as its title, but it’s also so much more.

When Kailyn Flowers runs into her teenage celebrity crush on her first day of law school, it seems like the setup for the perfect rom-com. But Daxton Hughes isn’t the hunky heartthrob he portrayed on television, and their awkward first meeting leads to a law-school rivalry — which doesn’t leave room for romance.

Eight years later, Dax is an entertainment lawyer in need of Kailyn’s services as a trust lawyer for his younger sister, Emme. A family tragedy, a messy financial situation, and a custody battle with an aunt with less-than-honorable intentions makes for a complicated scenario, but it gives Kailyn a chance to get close to Dax.

Having spent time in the foster care system before being adopted, Kailyn takes her job as Emme’s conservator seriously. It’s not hard to envision a future with the Dax she has gotten to know, but they’re a long way from that first day of law school and the meet-cute that went wrong.

There are a lot of lighthearted and romantic moments in Meet Cute, but there’s also a fair amount of drama and angst. Kailyn and Dax have a lot to sort out in the midst of Dax’s complicated family situation, but the romance is believable and steamy. Fans of Jasmine Guillory’s The Wedding Date and Helen Hoang’s The Kiss Quotient will love Meet Cute.

Jamie Pope’s One Warm Winter (Dafina) is a sweet and tender love story about a young woman in search of herself and the man who will do anything to protect her.

Wynter Bates was adopted as a child and knows nothing about where she came from. She’s lived a life of wealth and privilege, but she’s also terribly lonely. When her tech-billionaire father gets entangled in a scandal that affects his presidential run and raises questions about Wynter’s birth, she becomes the center of a media frenzy. To escape the attention, Wynter takes off for an island retreat on the arm of her bodyguard, Cullen Whelan.

Cullen is former military intelligence, and babysitting an heiress is an easy gig — or so he thinks. Wynter is determined to find out who she is, and Cullen knows things about her past that he can’t reveal. As they spend more time together, Wynter begins falling for her sexy, protective bodyguard, but what kind of future do they have if she can’t trust him to tell her what she needs to know?

This poignant and racy romance is also a story about family, identity, and belonging, with a dash of mystery. One Warm Winter is a follow-up to Pope’s Mostly Sunny, but it can be read as a standalone.

Jane Feather’s Tempt Me with Diamonds (Zebra) is the first book in her London Jewels trilogy.

Diana Sommerville is beautiful, brilliant, and incredibly wealthy — and she’s about to take on a less-than-desirable roommate. The diamond-mine heiress isn’t happy to learn her late brother left his half of the family estate to his best friend, Rupert Lacey. Diana and Rupert have known each other since they were young and were once engaged to be married — until he was unfaithful, and she broke things off. Needless to say, their tumultuous history doesn’t make for a friendly reunion.

To satisfy the gossips and prevent a scandal, Diana and Rupert pretend to be married until they can come to some sort of agreement about how to divide the estate and family business. They butt heads at every turn, arguing over every financial decision and antagonizing each other over the past. But the more time they spend together, the harder it is to deny their feelings for each other.

Tempt Me with Diamonds is a sweet and frothy second-chance-at-love story. Diana is a strong-willed spitfire, and Rupert is a dashing hero who regrets losing her love. Their slow return to trust makes for an entertaining read and a solid start to the trilogy.

Kristina Wright lives in Virginia with her husband, their two sons, a dog, a cat, and a parrot. She’s the digital editorial manager of Your Teen Magazine and a regular contributor to BookBub. Her work has appeared in a variety of publications, including the Washington Post, USA Today, Cosmopolitan, and more. Find her on Twitter at @kristinawright and tell her what you’re reading!