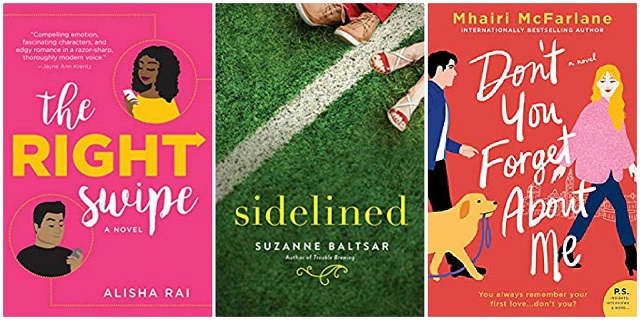 It’s September, which is always a bittersweet month for me. My kids went back to school this week and, while I loved having them home all summer, it was tough carving out time to read. I try to model good reading behavior, so my sons are quite used to finding me with a book in my hands — though I may only get to read a few pages before I’m interrupted. But fall has unofficially arrived, which means earlier bedtimes and more reading time for me!

This month, I’ve read a trio of terrific romances. Romcoms are dominating the romance scene these days, so it takes a lot to stand out from the crowded field of colorfully illustrated covers and punny titles. Powerhouse Alisha Rai succeeds in setting herself apart as she launches her new Modern Love series with The Right Swipe (Avon) and gives readers a sizzling take on the modern dating scene.

Rhi Hunter is an entrepreneur and the founder of a hot new dating app called Crush. Rhi’s stake in Crush is personal as well as professional, having left a competing company because of her abusive ex/former boss. She’s now so focused on making sure Crush is a success — and crushing her competitors — that she’s cynical about dating at all. Then a sexy football player comes back into her life and sets her world on fire.

Former NFL star Samson Lima had a promising hookup with Rhi, but he disappeared before it could go any further. Their attraction is still there, but Rhi doesn’t want anything to do with the man who ghosted her, especially when he happens to be the nephew of Belle Kostas, the owner of a competing app. But Samson had a good reason for bailing on Rhi — and he’s ready to make amends. If she’ll give him another chance.

Fans of Alisha Rai’s complex and layered previous novels will know there is more to this story than a second-chance romcom, though. This is the kind of contemporary romance that successfully tackles serious real-world issues without skimping on the relationship.

Rhi and Samson are an absolute delight together — one of my favorite couples this year! Their chemistry is perfect, and they have enough maturity to navigate a relationship with open communication and genuine intimacy. The secondary characters enhance the plot in clever ways, and several scenes hint at their stories to come in the series.

Rai has crafted a winner with The Right Swipe — this is true romance in the modern era!

I’m not a football fan, so I’m not quite sure how I ended up reading two romances that feature the sport, but I’m glad I did! In Suzanne Baltsar’s Sidelined (Gallery), Charlie Gibb lives, breathes, and dreams football. She grew up learning about the sport from her father, a celebrated coach at Georgia Tech. Now she works in recruitment at Georgia Tech — but she wants more, so she takes a job as the head coach of a Minneapolis high school football team.

Charlie expected to face some opposition for being a woman in a traditionally male job, and she gets it. The team’s offensive coordinator, history teacher Connor McGuire, is filled with snark and sour grapes over having lost the job he expected to get when the head coach retired.

There’s also resentment and doubt from the players, students, and parents — enough to make a reader scream, “It’s 2019, get over it!” Everyone thinks Charlie got the job because of who her father is, not because of her ability. But she knows football and how to grow a winning team, so it isn’t long before she proves she’s more than qualified.

Once Connor recognizes Charlie’s knowledge and skill, their bumpy beginning blossoms into a secret romance. Charlie has to find a way to balance the new job with her increasingly complicated feelings for Connor. The couple have a supportive team in their circle of friends and Connor’s family, but Charlie and Connor have choices to make about their careers and their future together.

It’s easy to root for Charlie and Connor and their shared love of the game, whether you’re a football fan or not. Readers who enjoyed Baltsar’s previous novel, Trouble Brewing, will be delighted to revisit some familiar characters, but Sidelined is an enjoyable standalone enemies-to-lovers tale — and a perfect romance for fall football season!

I admit, I decided to read Don’t You Forget About Me (William Morrow) because the title happens to be one of my favorite 80s songs, but I was quickly charmed by Mhairi McFarlane’s wholly original romance and her fresh twist on the reunited-lovers trope.

Georgina Horspool is 30 years old and has just lost a lousy waitressing job in the most embarrassing way possible. She doesn’t think her life could possibly get any worse — until it does when she catches her boyfriend in bed with someone else. Reeling from this humiliating double whammy, she takes the first job that she can get: working as a bartender at a new pub. Unfortunately, the owner is a guy she fell in love with 12 years ago — a guy who broke her heart.

Lucas McCarthy is no longer a brooding teenage loner. He’s grown into a successful, handsome, complex man with a thriving new business and the kind of adult life that has eluded Georgina. What could have been an awkward reunion between the two of them turns into something else entirely when Georgina realizes Lucas has no memory of her. Spending time with Lucas rekindles her attraction — and Lucas seems to feel the same way. But their renewed connection forces Georgina to reflect on how her life went sideways when she was 18.

Georgina is every girl who had big dreams in high school, only to have life deal some unexpected blows and derail her plans. In the face of familial nagging about her assorted failures, and her disappointment in herself, Georgina’s friends offer the kind of support and nurturing she desperately needs. But in the midst of growing a promising relationship with Lucas, she has to put the past to rest in order to build the new, and happier, future she wants for herself.

Don’t You Forget About Me is filled with plenty of humor and heart, conjuring memories for readers of the one who got away. The slowly revealed backstory is unexpected and poignant, making the romance between Georgina and Lucas all the more tender and satisfying.

Kristina Wright lives in Virginia with her husband, their two sons, a dog, a new puppy, a cat, and a parrot. She’s the digital editor of Your Teen Magazine and a regular contributor to BookBub. Her work has appeared in a variety of publications, including the Washington Post, USA Today, Cosmopolitan, and more. Find her on Twitter at @kristinawright and tell her what you’re looking forward to reading this fall!