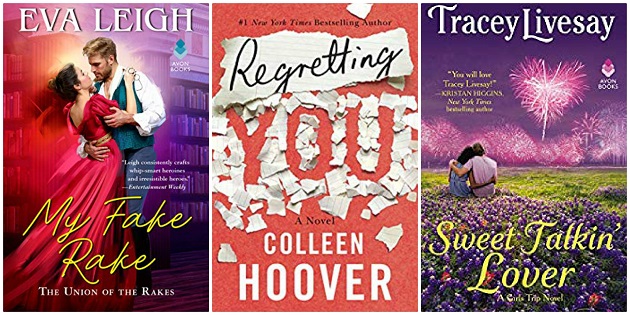 Well, 2020 has arrived, and my book-reviewing schedule is filling up with my favorite genre — romance! In between celebrating the holidays and entertaining sickish kids (while trying to stay healthy myself), I read these favorites last month. I can’t wait to see what’s in store for this year!

I came of age in the 1980s, so I admit to being intrigued by the idea of an historical romance series inspired by my favorite 80s movies. With “The Union of the Rakes,” author Eva Leigh riffs on “The Breakfast Club,” envisioning a group of very different young men who meet at prestigious Eton College in 1797.

My Fake Rake (Avon) serves as the introduction to this promising new series, and it won me over with charming characters and a fresh take on a familiar trope. Sebastian Holloway is a scientist and an academic better suited to a lab or library than life in high society. The handsome anthropologist also has a crush on his friend and fellow scientist, Lady Grace Wyatt. Unfortunately, she’s the wealthy daughter of an earl, and he’s a commoner who lacks the social status to pursue her.

When Grace is compelled to marry, she sets her sights on Mason Fredericks, a wealthy naturalist who seems too occupied by his own scientific work to even notice her. Grace creates an elaborate plan to use Sebastian to catch Mason’s fancy — unaware, of course, that Seb is pining for her. Romance begins to sizzle between Grace and Seb as they spend more time together, until their feelings for each other can no longer be denied.

Billed as “Weird Science” meets “Can’t Buy Me Love,” it would be equally fair to call this Regency romance Pygmalion with a twist. The secondary characters shine, especially Seb’s Eton pal the Duke of Rotherby, who returns in his own book later this year, Would I Lie to the Duke. Regardless of inspiration, My Fake Rake is an entertaining friends-to-lovers tale and a pleasure to read.

At the center of Colleen Hoover’s Regretting You (Montlake Romance) is a tumultuous mother/daughter relationship, with the novel alternating between the points of view of Morgan Grant and her 16-year-old daughter, Clara. When a shocking accident takes the lives of two people they love, Morgan and Clara have to find a way to navigate through their grief while rebuilding their own strained connection.

Morgan has lost the two people she’s closest to — her husband, Chris, and her sister, Jenny — while Clara has lost not only her father, but the aunt who had increasingly become her confidant as she drifted further from her mother. In the midst of the loss, secrets and lies from the past are revealed, and Morgan’s life is rocked to the core. She finds herself relying on her late sister’s equally grief-stricken and confused fiancé, Jonah Sullivan, for support.

For Clara, the loss of her father and her beloved Aunt Jenny initially leads to anger and rebellion and, in time, a surprising maturity. She dreams of becoming an actress and has a crush on Miller — a boy her father didn’t approve of. Clara and Miller’s relationship is fraught with teen angst as Clara grapples with betrayal by the adults in her life.

Jonah and Morgan have known each other since high school; Morgan married Jonah’s best friend, Chris, her high school sweetheart, after she got pregnant with Clara. Jonah drifted away for a while until a one-night stand with Jenny led to pregnancy — now he’s not only part of the family, he’s also a teacher at Clara’s school. Morgan and Jonah’s budding new relationship is built on shared history — as well as shared grief — as Jonah struggles with being a single parent to Jenny’s baby, Elijah.

For Morgan and Clara, coming to terms with the past means letting go and moving forward, and mother and daughter eventually meet each other halfway. Regretting You is a powerful story of love, hope, and redemption — and a tour de force for the incredibly gifted Hoover.

Chicago marketing manager Caila Harris gives her all to her work. She doesn’t have time for dating or a social life — not even her annual trip with her best friends from college. Then a family tragedy sends her into a tailspin that leads to several professional missteps that put Caila on uneven footing with her boss. Now she’s off to the small town of Bradleton, Virginia, to determine if the company’s failing cosmetics factory there should be closed.

Right off the bat, Caila encounters pushback from the mayor, Wyatt Bradley, as well as the residents of Bradleton, who aren’t too happy to see her. Not for nothing, Wyatt’s nickname around town is Mayor McHottie — an embarrassing bit of trivia that happens to be true, as far as Caila is concerned.

Wyatt is determined not to lose the town’s top employer, and he’s committed to winning Caila over to small-town life in order to keep the plant up and running. Of course, the longer Caila stays, the more business and pleasure get muddled, until she and the mayor can’t keep their hands off each other.

Sexy and clever, Sweet Talkin’ Lover portrays the realistic concerns of two very different people whose paths might otherwise never have crossed. Caila, who is not only a big city outsider, but also African American, finds herself falling for Wyatt even while she’s determined to make the right decisions for her company.

Wyatt’s increasingly intense feelings for Caila mean reconsidering his loyalties — and making some difficult choices about what he wants for his future. Livesay deftly untangles the knots of these two compelling characters’ lives and weaves a sweet and satisfying romance that launches what promises to be a deliciously entertaining series.

Like what we do? Support the nonprofit Independent here!
comments powered by Disqus