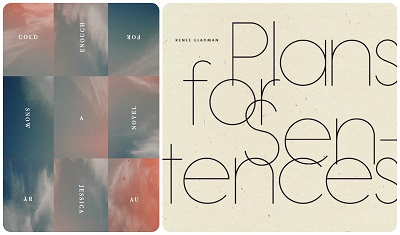 This month, I’ve found a couple of needles in the haystack for you — needles in the sense that if you decide to purchase copies of these books from your local bookstore, you’ll have to special order them.

But don’t let that deter you, because both Jessica Au’s Cold Enough for Snow and Renee Gladman’s Plans for Sentences are extraordinary for their quiet simplicity, beauty, and refreshing approach to language. They invite the reader to linger in their pages, to dream and imagine.

I typically read several books a month, but I’ve already read Au’s novella twice and can’t get enough of perusing Gladman’s prose poems and ink drawings. Both center on the inner life, and each in its own way deals with connection and disconnection, with how we respond to and inhabit space.

Au lives in Melbourne. Cold Enough for Snow is her debut, and it won the inaugural Novel Prize from publishers Giramondo, New Directions, and Fitzcarraldo Editions. Before discovering Plans for Sentences, I hadn’t encountered Gladman’s work, but she is an American poet, novelist, and essayist with numerous books to her credit.

In Cold Enough for Snow, a mother and daughter who live in different countries meet for a holiday together in Japan. The daughter is the book’s narrator and has arranged it all: how they will travel, where they will stay, which museums, galleries, and temples they’ll visit. She navigates the world efficiently but with close attention to aesthetics. Au employs two devices which were also used by Rachel Cusk in her Outline trilogy: The main characters are unnamed, and the dialogue comes in the form of narrative. This contributes to the quiet tone of the writing.

But while the daughter is a careful observer, noticing such incidentals as how her mother places her shoes, many things divide them, including language. The mother’s first language is Cantonese, while the daughter’s is English. This is only one way in which they engage differently with the world.

When visiting galleries, they go their separate ways, and the daughter often finds her mother waiting on a bench outside. At one point, she offers to purchase her mother an art book, but the older woman “seemed hesitant to even reach for a book, pointing instead at one, seemingly at random, and saying this one, her voice like a question.”

The mother is more comfortable when buying gifts for her grandchildren, choosing socks, backpacks, or T-shirts. “Out of all the places we had seen,” the narrator observes at the end of the story, “she had seemed happiest at the small store we’d found in one of the many underground passages that joined the subway.”

But it isn’t just the mother who doesn’t fully connect. When she talks about her spiritual beliefs, the daughter “knew that [my mother] wanted me to be with her on this, to follow her, but to my shame I found that I could not and worse, that I could not even pretend.”

This dissonance is laid out as the fabric of their relationship rather than posited as resolvable. Their visit to Japan is individually experienced, and their pleasure is first and foremost internal. Recollections from the daughter’s youth, which intersperse the narrative, underscore this point. They discuss memories but don’t fully share them, since family stories are remembered differently depending on who recalls them.

But when the daughter is alone, she fully connects to her surroundings, as in a solitary hike she takes at the end of the book. In another lovely passage, she housesits for an art professor who “seemed to have no boundary between the academic and the personal.” Her experience of being by herself in this house is described in exquisite detail.

Only, disconnection sometimes exists side-by-side with connection. In recalling her deep impressions of a sculptural portrait by her father-in-law, for example, the narrator reflects, “I felt that nothing I had ever done had lived in this way, but it seemed that I did not even know enough to ask the right questions.”

Do we ever know what the right questions are, though? I wondered when I first picked up Gladman’s Plans for Sentences. But the more I perused it, the more it intrigued me. Like Au’s novella, it explores connection and disconnection — this time between the illustrated world and the spoken one, between the legible and the illegible, the freeform and the planned. Her work pairs architectural drawings with prose poetry. She begins:

The book contains 60 numbered prose poems accompanied by ink drawings, a few of which are streaked with ochre and grey watercolor. Although the drawings are more precise than doodles, they seem to arise from that sort of impulse, as do her poems. They recall the automatic drawing and automatic writing of the surrealists — for whom I’ve always had a soft spot, in that they spring from the unconscious mind. There seems to be no manipulation of the material, which gives them a kind of stillness. As with Au’s work, there’s no self-justification.

As an example, “Figure 13” is a drawing of structures, some rendered in tight scribbles, others more loosely, with draping canopies and arcs, ropelike bridges connecting them, and several dangling trapezes. I thought of the tenting I recently saw at Cirque du Soleil. The words on the facing page begin:

“These sentences will canopy, and inner sentences will flow, will slope through the space, will swing, an infectious glee growing on the columns, making tent stations and tent folds. The sound of the rectangle will out quietly will blacken down the perimeter, push out, rise up”

Another drawing, “Figure 59,” suggests a telescope or satellite dish within a kind of observatory, looping in circles containing platforms, with ramps and riggings made of squiggly lines and illegible handwriting. The text begins:

“These sentences will constellate the territories of the poem and will be the unraveling of the middle interior sky, too early arriving to the membranous sky, and will thin to the exterior”

It seems a little silly for me to be describing the drawings here myself, only to then provide Gladman’s own descriptions. You really have to see them for yourself. But I love the word play, the imaginative loose-endedness.

And most of all, I love the space these pieces occupy, which is somewhere I’ve never been before. There are no end-stopped lines and no periods finishing the sentences. It’s as if Gladman might go on — or you might go on — from where she’s left off.