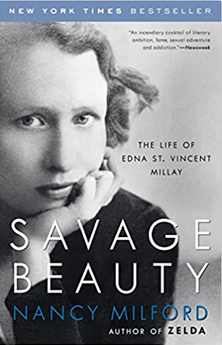 What a bewitching figure was Edna St. Vincent Millay! When I picked up Nancy Milford’s 2001 biography of the Pulitzer Prize-winning poet, Savage Beauty, I knew next to nothing about her, certainly not that, in 1938, Millay was one of the 10 most famous women in America. She lived near Great Barrington, Massachusetts, and although for several years I frequently went to the town while my daughter was in college there, I never thought to visited Millay's home, Steepletop.

But apart from her life, her manner, and her example, I discovered her sonnets. So much has changed for women in the last century that you may wonder what her work has to say to us today. But when you read her, you will see that she was an important bridge from 19th-century notions of prim femininity to our current understanding of female sexual agency. Millay’s poetry and her example gave a generation of women new ways of thinking about passion, sex, and themselves.

She was known to her family simply as Vincent. She had a fresh openness about her and a lot of self-confidence. At Vassar, which she attended on full scholarship, she often skipped classes and disobeyed rules. She was also comfortable in her body and with her sexuality. An early anecdote recounted in Milford’s biography by Vincent's sister Norma gives you a taste of her style:

“One afternoon we'd gone for a walk up Mount Overlook, and on our return two boys were following us. At first we paid no attention to them. We'd always liked to walk and there we were two — I daresay pretty — girls striding along enjoying ourselves. And these two callow youths, calling out to us, trailing behind, but trailing, still, if you follow me, threateningly. Suddenly Vincent turned around and, crooking her finger, beckoned them. Well, they came right up pretty quick. And she said, looking them directly in the eye, ‘it is true that we have vaginas and breasts, but we are walking alone together because it pleases us to and that is our right. We have selected to be alone, and we intend to so remain.’ The boys just stood there, bug-eyed, truly stricken.”

She was defiant and fiercely intelligent, but these qualities didn't come with hard edges or bitterness. That's probably why she was able to thrive in the early 1900s. Millay struck a kind of elfin figure — being both nonthreatening and highly seductive — which served her well. Everyone fell in love with her, including the rather stodgy literary critic Edmund Wilson.

But she was also openly bisexual, liked to swim in the nude, and smoked cigarettes in public. During her long marriage, she conducted several passionate affairs — one with a much younger man. Her husband, Eugen, was a Dutch businessman who adored and thoroughly understood her. Incredibly, he wrote to her frequently (while also conducting a few affairs of his own) when she ran off to Paris with poet George Dillon, for whom she had arranged a Guggenheim fellowship. Her husband's letters are full of love, longing, and patience.

During her heyday, Millay sold thousands of volumes of poetry, which is extraordinary for a poet of any epoch. She was also a compelling presence onstage: small and redheaded, draped in long velvet robes. The power of her voice brought large audiences under her spell. With a quick Google search, you can find several recordings of her recitations. But if you're anything like me, you'll immediately notice the quaint and dated style of her delivery. Her phrasing and timbre bring to mind Glinda the Good Witch in “The Wizard of Oz.”

We are all products of the age in which we live, of course. Our ideas of beauty, of strength, and even of seductiveness are informed by the fashion of the day. Listening to Millay's recitations, I am struck by how times have changed.

You can see in several interesting photographs from Milford’s book what Millay was up against. Many early pictures capture her direct, intelligent, and vibrant character. But there’s one taken later in her life that is staged in order to conform to what was then a more acceptable and twee notion of femininity: She catches up the hem of her dress in one hand, and her body dips coyly as she peers beyond a garden gate.

In Savage Beauty, you also learn about the struggle Millay had coming to terms with aging. It was hard for her to give up what she'd been and become a new version of herself. But far worse than this, she found it increasingly difficult to write, especially after World War II. She tried to write polemically and, in so doing, lost her touch.

The end of her life was tragic, but it’s one of the oldest stories in the book: After a fall, she damaged some nerves in her back and was prescribed morphine injections. Soon, Millay became not only a raging alcoholic but also a morphine addict. Her husband succumbed to the allure of morphine, too, and died the year before her. In 1950, at the age of 58, alone in the home they had shared, Millay fell down some stairs in her nightgown and broke her neck.

But my goodness — all that passion, all that life and experience, and all that wonderful writing! Reading about Millay’s life had me enthralled, and I enjoyed going through her sonnets, which often reflect on the temporal nature of love. Still, love might not have lasted, but her sonnets did. I admire the tone she strikes, her clever use of language, her purity and passion, her light and witty touch.

This one — written to Dillon but evidently never sent — is particularly poignant. It shows Millay’s skill and control as a poet, but also her vulnerability and kindness, even as she has the final word:

Well, I have lost you, and I lost you fairly;
In my own way, and with my full consent.
Say what you will, kings in a tumbrel rarely
Went to their deaths more proud than this one went.
Some nights of apprehension and hot weeping
I will confess; but that's permitted me;
Day dried my eyes; I was not one for keeping
Rubbed in a cage a wing that would be free.
If I had loved you less or played you slyly
I might have held you for a summer more,
But at the cost of words I value highly,
And no such summer as the one before.
Should I outlive this anguish — and men do —
I shall have only good to say of you.