Read In, Not Through 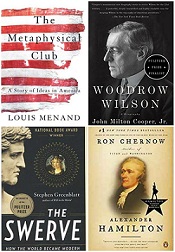 No matter how long ago you were in college, your professors pop up in your life again without warning. As it has slowly dawned on me that I'll never read all the nonfiction books I’ve accumulated to read at some later date, I remembered a lesson from one of my professors at Saint Louis University, Walter J. Ong.

The Jesuit priest, who became president of the Modern Language Association in 1978, was a polymath of some accomplishment, writing on everything from Gerard Manley Hopkins to Marshall McLuhan.

He gave us a massive reading list for our English course but explained that he did not expect us to read every book all the way through. Rather, he said, we should read “in” the book. Sample it, so to speak; taste it. Find out how the writer’s mind worked, what he or she was getting at.

So I’ve decided this is just the approach for my shelves full of unread nonfiction books. (I read slowly and focus on fiction, but I have accumulated a lot of nonfiction over the years.)

One of the first books I plucked off the shelf was Louis Menand’s 2001 book, The Metaphysical Club, on the impact of four original American thinkers after the Civil War. Menand’s thesis is that these four — Oliver Wendell Holmes, William James, Charles Sanders Peirce, and John Dewey — had a profound impact on the direction of American thinking due to their common notion that ideas should not be ideology.

Although the other three are much better known, I immediately went to the chapter on Peirce and his father, Benjamin Peirce. Here again, an old college professor, James Collins, influenced my choice, because he devoted a third of his course on modern philosophy to the little-known founder of semiotics.

It was interesting to get re-acquainted with Peirce, but what struck me most was Menand’s description of how students experienced the Harvard philosophy classes of the father, Benjamin. “Few men could suggest more while saying so little, or stimulate so much while communicating next to nothing that was tangible and comprehensible,” a former student wrote.

This is a perfect description of my experience of James Collins, who left us dazed at the end of each class with illumination that vanished all too quickly but which was nonetheless immensely gratifying.

The other books I’ve been sampling have less of an emotional tie to my past. Bloodlands: Europe Between Hitler and Stalin is a frighteningly vivid account of the slaughter of 14 million civilians before and during World War II, mostly in the flat region between Germany and Russia occupied by Poland and Ukraine.

The latter country has, of course, become extremely topical, but author Timothy Snyder supplies a horrifying backdrop as to the cost in human lives experienced in Ukraine from Stalin’s artificially generated famine through Hitler’s shooting of Jews. “During the years that Stalin and Hitler were in power,” Snyder writes, “more people were killed in Ukraine than anywhere else in the bloodlands, or in Europe, or in the world.”

Even Ron Chernow recently confessed he is such a slow reader that he would have trouble slogging through the massive biographies he writes. That made me feel better about not finishing Alexander Hamilton. I have, however, enjoyed sampling John Milton Cooper’s Woodrow Wilson: A Biography.

Wilson has become quite controversial because so many of his attitudes, particularly his racism, are so completely out of sync with modern thinking. But he had a terrific and lasting impact on our history, and my friends who do read biographies assure me Cooper’s work, nominated for a Pulitzer Prize, is far superior to the Wilson biography by A. Scott Berg, better known as a Lindbergh biographer.

Two other nonfiction books I’m reading “in” have had a much shorter life on my shelves. The Swerve: How the World Became Modern by Stephen Greenblatt, was lent to me by a friend. It’s a fascinating account of how the Renaissance rediscovery of a Roman poet modernized Western thinking.

Another friend recommended Mortal Republic: How Rome Fell into Tyranny by Edward J. Watts. It is a bit self-consciously drawing a parallel to our own situation in the United States, but who’s to say there aren’t some lessons for us there?

Not a bad haul. This kind of sampling may not be ideal, but I feel much wiser now than when I was waiting for the time and energy to read the whole books.

Mysteries and thrillers tend to be grimly serious, but a little humor doesn’t hurt.