Not a Melting Pot 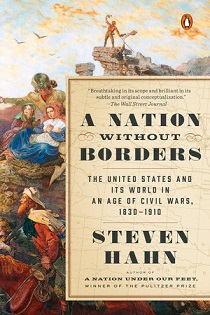 There is a lot of controversy as midterm elections approach about the U.S. border, and specifically the southern border with Mexico, which has become the primary channel for immigration. There are books that can help — not necessarily by solving the problem, but by illuminating the history that has brought us to this point.

The Spanish Frontier in North America by David J. Weber is a thick, historical text that explores Spain’s settlements across what is now the southern United States, from Florida to California. It is a reminder, if anyone needs it now, that the cultural diversity in the U.S. has deep historical roots. Ponce de Leon, Junipero Serra, and other less-familiar figures helped shape a culture that makes Spanish-speaking people feel comfortable making their homes here.

The Mexican-American War (1846-1848) emerges time and again as a pivotal event in shaping the future of our country. It is fatefully intertwined with the vexed battle over the extension of slavery in the regions “liberated” from Spanish and Mexican control. Carrie Gibson has detailed this checkered past in El Norte: The Epic and Forgotten Story of Hispanic North America.

Our history lessons in school tended to treat this war as a training ground for the Civil War, giving troops and generals battleground experience. Protestant Anglos were the victors, and Catholic Mexicans were the losers — so simple, except the reality was more complex and the legacy mixed.

Steven Hahn’s A Nation Without Borders: The United States and Its World in an Age of Civil Wars, 1830-1910 describes the importance of this war. In a chilling subchapter titled “The Blood of Continental Destiny,” he debunks the received wisdom that the Mexican-American War was “a relatively minor military affair,” calling it instead “one of the costliest, most divisive, and most politically vexing episodes in American history.”

The war was the work of James Knox Polk, a one-term president (1845-1849) who has been overshadowed by Abraham Lincoln and mostly forgotten. But the former Tennessee governor (and slaveholder) pushed the country’s expansion, taking over virtually the entire Southwest for the United States.

This country, in fact, has been anything but a melting pot. Rather, it has been a cauldron of diversity that a dominant WASP culture has, unsuccessfully, tried to mold into a unified nation. Several historians have described these diverse cultures in books I mentioned in a previous column.

Colin Woodard’s seminal 2011 book, American Nations: A History of the Eleven Rival Regional Cultures of North America, provides some historical context to the current political turmoil. Andro Linklater’s The Fabric of America shows how it was precisely borders that came to define the nation.

The Electoral College has enshrined the concept of red states and blue states for the election of a president, but the midterms give us a better idea of the diversity beneath that simplified color scheme. The House of Representatives, in particular, as the Framers intended, provides a snapshot of the political interests in the country.

Beyond red and blue, Democrat or Republican, Latino or Black, the election can reflect the diverse cultures roiling the nation and show that democracy, far from dying, is as robust as ever.

Latino cultures, an important part of that mix, are likely to play a major role in this election, with immigration pros and cons driving voters, but also mundane concerns like the cost of living, interest rates, and economic growth — issues that do cross cultural lines.

A Matter of Taste

Breakfast and a Book