Hagiography glorifies saints and heroes — and we need that. 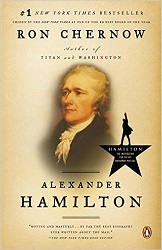 The success of the musical “Hamilton” has revived the reputation of a forgotten Founding Father and even inspired public resistance to removing him from the $10 bill. The Broadway play, which won 11 Tony Awards, was based on the bestselling biography Alexander Hamilton by Ron Chernow.

Neither the biography nor the play covers up Hamilton’s flaws, but they give full credit to his political genius and personal heroism. He was, after all, a hero of the American Revolution, co-author of The Federalist Papers (which molded the shape of the U.S. government), and architect of the U.S. economy as the young nation’s first treasury secretary. All this was a considerable achievement for a parvenu born out of wedlock in the Caribbean.

One of Hamilton’s flaws that could not be covered up was his impetuousness, fueled by his pride, which led him to engage in the famous 1804 duel with Aaron Burr, who was vice president at the time. It resulted in Hamilton’s premature death at the age of 47.

The current revival of interest in Hamilton and belated appreciation for his role as a Founding Father shows the power of hagiography — literally, writing about the lives of the saints, but in general, any biography that tends to crown its subject with a halo.

Chernow’s biography helped to balance out the record after Gore Vidal’s revisionist historical novel, Burr, published in 1973, presented a more negative picture of Hamilton from a point of view sympathetic to Burr.

Burr is even more forgotten than Hamilton, though Burr narrowly missed becoming our third president. Burr’s subsequent flirtation with a plot to establish an empire in Spanish territories now in the western United States — vividly recounted in David O. Stewart’s American Emperor — has made him something of a scoundrel in American history.

Real hagiography was at work in Robert Bolt’s 1954 play, “A Man for All Seasons,” which depicted Thomas More as an eloquent martyr for his principles. Paul Scofield’s powerful portrayal of More won him a Tony for the title role in the Broadway play and an Oscar in the 1966 film version.

More was long revered in the Catholic Church as a saint and a martyr and was officially canonized in 1935. Charles Brady’s 1953 hagiographical novel, Stage of Fools, is typical of the rose-colored view of More’s career and defiance of Henry VIII’s break with Rome.

So Hilary Mantel’s reversal of roles — making More a scruffy hypocrite and his nemesis, Thomas Cromwell, an enlightened patriot — was quite controversial when the first two volumes of a planned trilogy, Wolf Hall and Bring Up the Bodies, appeared. The subsequent miniseries from the BBC completed the conversion as Mark Rylance portrayed Cromwell as an ever-so-thoughtful and clever politician, while Anton Lesser’s More seemed like a vindictive, somewhat clueless zealot.

As entertaining as Mantel’s version is, history is almost certainly on the side of Bolt’s More, just as it is on the side of Chernow’s (and Lin-Manuel Miranda’s) Hamilton, rather than Vidal’s Burr.

Yet hagiography has its place. We need our saints and heroes.

Writer Garry Wills has been happy to oblige with books about both. He is perhaps best known for his Pulitzer Prize-winning Lincoln at Gettysburg, which puts the historic address in the context of Lincoln’s life and cultural milieu. Wills also wrote Explaining America, a textual analysis of Thomas Jefferson’s Declaration of Independence, and Cincinnatus, which links George Washington’s conception of the young United States to Enlightenment notions of a classic republic.

Wills, who studied for the priesthood as a Jesuit before leaving the order, has also written extensively about religion and his own Catholicism. One of his focuses has been St. Augustine, the 4th-century church father who is credited with having shaped, for better or worse, much of Catholic doctrine.

Wills has written a biography, Saint Augustine: A Life, translated Augustine’s classic work, The Confessions, and, in 2011, published a “biography” of the work itself, attempting to demythologize many of the misconceptions about it. In 2012, he wrote a tour de force, Font of Life, taking a moment when Augustine’s life intersected with that of another church father, St. Ambrose of Milan, to discuss their joint influence on church doctrine and liturgy.

For both the American heroes and the Catholic saints, this is very sophisticated hagiography and has yet to find a Gore Vidal or Hilary Mantel to provide a revisionist counterweight.

In the meantime, then, we can bask in the glow of those haloes.

You have nothing to lose but your guilt.

Defeated by your TBR pile? Head back to class!