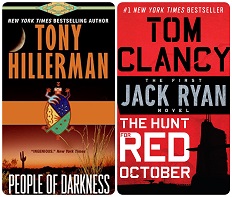 Producers of streaming shows are starved for content but seem to have found a good match with book series. While big-budget Hollywood movies thrive on comic books, streaming television is more likely to adapt — dare I say “more adult” — series of books.

Michael Connelly, for instance, is a prolific writer whose 24 novels featuring L.A. detective Harry Bosch has already resulted in a “Bosch” TV series on Prime Video, which stretched over seven seasons and now is being followed up with “Bosch: Legacy” on Prime’s freevee.

Another Connelly character, Mickey Haller, is the hero of Netflix hit series “Lincoln Lawyer,” which debuted in May and has already been renewed for a second season. The setting is again Los Angeles, but the titular Lincoln has been updated to an SUV in the TV series after the 2011 film starring Matthew McConaughey featured a Town Car limo. Other updates include casting Mexican American actor Manuel Garcia-Rulfo as Haller.

The late Tom Clancy, another prolific author, created the intrepid Jack Ryan character, who has been featured in several films and now is the hero of “Tom Clancy’s Jack Ryan” series on Prime Video. The TV version, starring John Krasinski, has run for two seasons already, and two more are promised.

The Ryan TV episodes aren’t based on books by Clancy, who published his first Ryan thriller, The Hunt for Red October, in 1984, launching his career as an author. Alec Baldwin played Ryan in the movie, but it was Sean Connery as Russian submarine captain Marko Ramius who stole the show.

Other famous book characters are being recycled into streaming series after a run of successful films. “Dark Winds,” a series that streams on AMC+, is based on Tony Hillerman’s novels Listening Woman and People of Darkness and features Navajo police officers Joe Leaphorn and Jim Chee. The two characters appeared in three films produced for the PBS Mystery series in the early 2000s — “Skinwalkers,” “Coyote Waits,” and “A Thief of Time.”

A brand-new Prime Video series starring Chris Pratt, “The Terminal List,” has also made waves. The plot involves a Navy SEAL who is the victim of a dark conspiracy. It’s based on a 2018 novel of the same title by Jack Carr, who himself spent 20 years as a SEAL.

The good news is that Carr has written four sequels featuring hero James Reece, and producers are ready to film a second season based on True Believer. The bad news is that Pratt, who plays in the “Jurassic World” and “Tomorrow World” franchises, is a very busy guy and may have trouble finding time for the sequel.

These action and detective series may not be everyone’s cup of tea. Thankfully, there is a vast array of streaming content, including many movies and series based on books. Even the best streaming series come to an end, and readers have the option of going back to the novels that inspired them and immersing themselves in that world all over again.