9 titles to satisfy even the most persnickety readers. 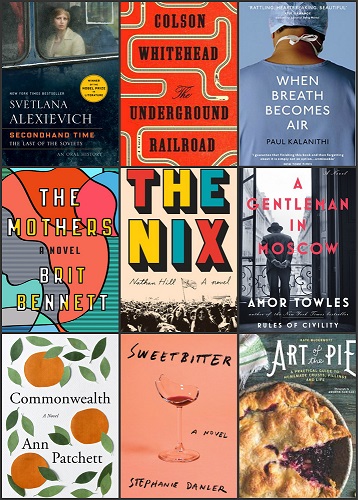 It was a year of literary riches, so how do you know which book to choose for the pickiest of sisters, aunts, husbands, and friends? Well, the nine titles here offer a little something for everyone, with topics as varied as Mother Russia, mortality, life in the big city, family strife, and even some pie to wash it all down.

A Gentleman in Moscow by Amor Towles (Viking). Following the success of Rules of Civility, Towles crafts another atmospheric landscape, this time in 1920s Russia. Count Alexander Rostov is under house arrest in a grand hotel, having been an unfit aristocrat. Over 30 years, his relationships with the staff and patrons lead him on a journey toward finding a life of purpose.

Commonwealth by Ann Patchett (Harper). Award-winning novelist turned bookstore owner Patchett is back, this time circling around two families, the Cousins and the Keatings, coping with marriage, divorce, and the ripple effects their bonds have over a lifetime. Patchett’s tale is part autobiographical, part imagined, with elements drawn from her father’s history, as well as individuals she’s known throughout her career.

Secondhand Time: The Last of the Soviets by Svetlana Alexievich (Random House). In this exhaustive work, Nobel Prize-winning journalist Alexievich presents a history of the Soviet Union’s disintegration and the emergence of a new Russia. Her interviews span three decades and probe beneath the propaganda for the real stories of life during the fall of the USSR: the unspoken oppression, fear, and deprivation that made way for a collective national pride and hope for the future.

The Mothers by Brit Bennett (Riverhead Books). Following the lives of three characters, Nadia, Luke, and Aubrey, first-time novelist Bennett explores what happens when a secret goes too far. She questions the idea of fate, unwritten choices, the “what ifs,” and the paths not taken. Motherhood, friendship, and community are at the center of this powerful story.

The Nix by Nathan Hill (Knopf). Clocking in at 620 pages, Hill’s debut tells the tale of college professor Samuel Andresen-Anderson, who hasn’t seen his mother in years…until she shows up on the evening news, having committed a crime worthy of national attention. Hill has been compared to Jonathan Franzen and Michael Chabon, making his literary career one to watch.

The Underground Railroad by Colson Whitehead (Doubleday). A National Book Award, Whitehead’s new novel may just be the next American classic. In it, young Cora, a slave, makes a break for freedom from her Georgia cotton plantation. Embarking on what becomes an odyssey of trauma and willpower, she soon discovers that evil doesn’t only exist in the South, but that there’s good and bad everywhere.

When Breath Becomes Air by Paul Kalanathi (Random House). A moving and thoughtful meditation on what it means to face death while still squeezing the most out of life. Diagnosed with terminal cancer, young neurosurgeon Paul Kalanathi decides, with his wife, Lucy, to have a baby, knowing Paul won’t live to see its first birthday. Lucy questions the decision: “Don’t you think saying goodbye would make your death more painful?” His response: “Wouldn’t it be great if it did?”

Sweetbitter by Stephanie Danler (Knopf). Twenty-something waitress Tess — living and working amid the cocaine- and sex-fueled New York City restaurant scene — figures out what it means to be an adult while trying mightily to become “somebody.”

Art of the Pie: A Practical Guide to Homemade Crusts, Fillings, and Life by Kate McDermott (Countryman Press). McDermott is the queen mother of pie-baking, and her new cookbook shares not only recipes for perennial favorites like peach and apple, but also savory pies, as well as tips, tricks, and tools of the trade to turn readers into experts at rolling, filling, and baking delicious treats for any occasion.