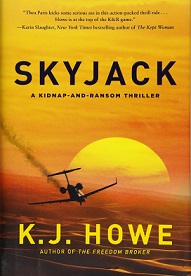 We all love Wonder Woman and Captain Marvel. But haven’t you ever wished for a more human superhero? One without a cape or magical weaponry? Meet Thea Paris.

She is an anomaly, one of only a few international hostage negotiators — a freedom broker — and, rarer still, a woman.

And a person with a dysfunctional family and diabetes. Her vulnerabilities are aspects of her life to which we can relate.

An unknown assailant has blackmailed the pilot into hijacking the plane. With outside communication disabled, no one knows of their emergency landing in the Libyan desert. As Thea negotiates with the skyjackers on the ground, it becomes apparent that Italian crime boss Prospero Salvatore is part of the plan. But why?

Meanwhile, a thousand miles away in Austria, Johann Dietrich has struggled with his Marfan syndrome for a lifetime, his skeletal deformities alienating him from his classmates. But his lifelong struggle with loneliness is no longer his most pressing concern.

On his 18th birthday, Johann’s father welcomes him into a secret society created after World War II to protect the Western world from Communism. But now, the threat is Muslims, and the society has a devious plan to rid the globe of present and future terrorists. Johann wants no part of the society or its mission; he and his Muslim girlfriend, Fatima, must act before the group alters humanity.

Soon it becomes clear that the two threats are related. Even with their technological resources, Thea and the Quantum team stay one step behind the hijackers. Will they be able to rescue the hostages before time runs out? And can they prevent an attack on Muslims around the globe?

Skyjack has us turning pages as fast as our eyes can process the words, reading with anticipation as we learn what new obstacles Thea and her team must overcome to accomplish their missions. But even more thrilling than the story is reading about a woman doing a job usually done by men.

Why did you make your protagonist a woman?

We have Jason Bourne, Jack Reacher, and many other action heroes, but I always burned to write an alpha female. Some of the strongest people I know are women, and I wanted to see them represented in this milieu. That said, I didn’t want to create a comic-book character, but rather a fully fleshed-out person, so I gave Thea a very dysfunctional family and a chronic illness to humanize her. We’re all vulnerable, and I hope it makes for more compelling reading.

With over 40,000 abductions taking place each year across the globe, there are only 25-30 kidnap negotiators in the world, with few women.

Women negotiators are rare, and I’ve met a wonderful one: Sue Williams in the U.K. Yet as the kidnapping threat increases, more women are becoming freedom brokers, and they are quite talented at the job. Female brokers tend to have a special talent for empathy, which is critical in dealing with both the kidnappers and the hostage’s family. I believe we’ll continue to see an upsurge in women pursuing this field. I also hope to bring awareness about travel safety and the growing issue of kidnapping. There are many hostages out there who have yet to come home, and we need to give them a voice.

Not only is it refreshing to read a thriller with a kick-ass heroine, but she deals with diabetes, making her vulnerable, just like most of us dealing with health issues. Why did you decide to have Thea deal with a serious health issue?

Over 400 million people across the globe have diabetes, and I wanted to show that having a chronic illness does not have to stop you from pursuing your dream job or being adventurous. My grandfather had diabetes — as a kid, I can remember him injecting himself with insulin, and that left a lasting impression. Also, there are many myths out there about diabetes, and I hoped that I could touch on different aspects of diabetes in each book to help people understand the implications better. I was most honored when the American Diabetes Association featured Skyjack in their magazine, sharing that it was an authentic portrayal of diabetes. While I was a medical writer, I wrote many articles on diabetes. I realized what a challenging and complex illness it is — and how it has impacted so many people’s lives.

The character of Thea Paris empowers women, which has been an important part of your life.

I grew up in a family that didn't put limitations on me. I learned how to motorcycle, scuba dive, and pursue many adventures along with my brothers. I truly believe that women can do anything they burn to do, and I encourage all women to pursue their goals. Realistically, there are challenges in many fields, but doesn’t that just make reaching that dream even more enjoyable?

Skyjack also conveys timely and compelling social messages. One of the main conflicts in the story focuses on a secret society created to prevent the infiltration of Communism after World War II but instead becomes a European terror organization targeting the Muslim population.

I’ve been a foreigner in a foreign land many times over. Living in these countries gave me a unique perspective, and it solidified the fact that there are magnificent and challenging people in every culture. Travel is a wonderful opportunity to step into someone else’s perspective, and I hope to learn from each experience.

The boys Thea escorts to England are former child-soldiers adopted through the African orphanage founded by her brother, Nikos. You have firsthand experience with helping end the plight of child soldiers.

I spent three years living in Kenya, and I’ve traveled to many more African countries. It’s a magical continent, stunningly beautiful, and the people are incredibly warm, always saying, “Welcome home” anytime I visit. I have met child soldiers via a wonderful charity called AMREF, and the plight of young boys snatched from their homes only to be forced into a war they don’t understand touched me deeply. Every child deserves a real childhood.

[Skyjack] showcase[s] the resiliency of the human spirit. Two child-soldiers weather a tough childhood only to become victims in a skyjacking and terrorist plot — but, in the end, they recover and go on to be adopted into a wonderful family in London. Perhaps the message is, “Never give up hope, tomorrow will be better.”

And what about Thea’s next mission, in Black September?

It focuses on a group of journalists kidnapped in the Syria/Jordan area. Thea’s ex-boyfriend is the security expert taken with the news team. Should be interesting to see a different side of Thea in this one!

Here are a few fun facts fans might not know about Howe. She:

K.J. Howe and Thea Paris rock it! You go, girls!