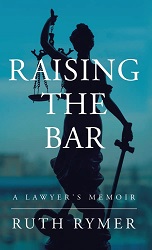 There are so many women in the world doing courageous things who deserve a shout-out, but this column focuses on just one. In her new memoir, Raising the Bar, Ruth Rymer deconstructs how she went from bullied spouse to an attorney instrumental in establishing family law as California’s fourth certified legal specialty.

Marriage in the 1950s and early 1960s produced wives and mothers with little personal power. Stay-at-home wives — including my own mother — had no agency.  If a woman refused to abide by her husband’s wishes, or even leave, she could very well find herself homeless and without her children. Also like my mom, Ruth endured the bizarre whims and demands of a doctor/husband who took himself too seriously.

Ruth’s mother and psychiatrist father opposed her dating Sherwin Miller when they realized he was Jewish; they believed it would lower their family’s status in the community. Ruth couldn’t tolerate such prejudice and married Sherwin in 1951, “gaining a husband and losing a family.” She’d given up everything for him.

While Sherwin pursued a medical degree and later became a physician, Ruth stopped working in 1958, when the first of their three children was born. It was then that Sherwin began exhibiting narcissism. By 1964, he was having affairs, not only cheating on Ruth but manipulating her until she felt powerless. For many years, she writes, it was like living in a boxing ring. Still, she was adamant about getting her education.

When they first married, Ruth and Sherwin had agreed they would each support the other until they’d earned their degrees. She insisted he keep his end of the bargain. Ruth enrolled in university correspondence courses for her bachelor’s degree and was determined to stay married until she finished law school.

In 1971, on her 40th birthday, Ruth found out she’d passed the California bar exam. She started her practice one year after the Family Law Act went into effect. The act eliminated “fault” in divorce proceedings, thereby changing not only women’s lives, but the family structure as a whole.

“Marriage no longer offered a lifetime-support guarantee,” she writes, so the new law included provisions to help women support themselves after divorce. Among other things, Ruth relentlessly sought to increase the amount and duration of spousal support. After all, she’d once experienced the systemic prejudice against married women who spent years taking care of their homes and children while dependent on their husbands’ income.

As Ruth’s practice bloomed, she joined the San Francisco Women Lawyers Club, known as Queen’s Bench, and the Women and the Law Committee. She jumped at the chance to chair a newly formed subcommittee — the Family Law Advisory Commission to the Board of Legal Specialization — to explore the designation of family law as a certified specialty in California. The effort passed in 1979.

Fittingly, in 2008, Queen’s Bench honored Ruth with its Lifetime Achievement Award. A pioneer in securing equal rights for wives fleeing toxic marriages, she’d achieved her goal “of freeing women from a legal system that prevented us from becoming our true selves.”

The Road to Publishing Is Paved with…

You finish that sentence.