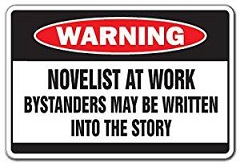 Some novelists are more autobiographical than others, but most avail themselves of details and observations taken from their own lives. A three-haired, dimpled mole that shows up on the face of a Russian mobster might be based on the blemish on a favorite aunt’s neck, or the peculiar hiss that a friend makes when saying the letter “s” might come out of the mouth of a bit character who gets no more than two lines in a 500-page novel.

The aspiring author is exhorted to “write what you know,” which often means writing people from your life into a story without their permission. Even an affectionate portrayal can cause offense, as the subject may be surprised or embarrassed to see herself in print.

So how to write a powerful, honest narrative that is true to the author’s sensibility but doesn’t offend loved ones?

The short answer is, you can’t. Not if you want to tell your own story. If you care too much about other people’s feelings, if you hold back, you’re cheating yourself and your work.

Maybe all writers don’t have this problem. Certainly Ernest Hemingway and Philip Roth seemed to have no compunction about ruthlessly mining their personal history, laying bare the emotional lives of lightly fictionalized friends and lovers, exposing their weaknesses and foibles for the delectation of strangers.

But as a woman, I’ve been conditioned to be accommodating, deferential, and always pleasant; as an adoptee, I am eager for approval, anxious to be liked, and acutely aware of what is owed to my adoptive family.

Therefore, I’m a little nervous about their reaction to my forthcoming novel about transracial adoption. While the story is fantastical in many aspects — the adopted protagonist is kidnapped and taken to a palatial compound hidden in the mountains of North Korea — the protagonist’s tortured search for identity is true to my own life, and my family is sure to recognize aspects of me in her.

Though they were witness to the rockiest years of my adolescence, they ascribed my inner turmoil to normal teenage angst. I did, too, until well into adulthood, when I finally confronted the profound effect being adopted had on me.

And then I wrote a book about it, an honest articulation of what it means to grow up a perpetual outsider even when within the loving embrace of your own family. I address the psychic complexities of interracial adoption with a raw honesty that they might find shocking.

Sure, I could have written a kinder, gentler book, a soft-focus portrayal that avoided touching on uncomfortable topics. But that would be a betrayal to myself not only as an adoptee, but also a writer.

It’s hard to predict people’s reactions to seeing themselves in print. I was surprised when a column I wrote caused some consternation among acquaintances who felt that my self-criticism reflected badly upon them.

While most of the group eventually agreed that the piece was about me, not them, one took such umbrage that she dropped me from the group email list. Perhaps she felt I had no business writing her into my piece. But as a writer herself, she should have understood that everything is potential fodder.

I hope that those family members who read my book will understand what my fellow writer could not: That, as a writer, I am obligated to tell my version of the truth, and if I were to censor it for fear of displeasing others, I would be failing my craft.

I’m pretty sure they’ll get it. After all, they were the ones who raised a writer.