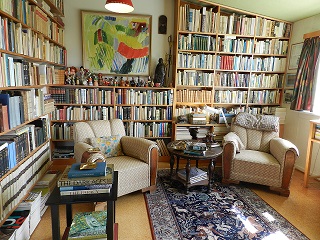 There’s something about the long, hot summer season that turns the mind to…reading. Perhaps it’s a hangover from years of school-assigned summer reading. Maybe it’s the illusion that — on your trip to the beach, or the mountains, or Brazil — you’ll have glorious stretches of empty time in which to wallow in the written word.

Though I am an avid reader all year long, it is only in summer that I set goals. I catch up on the New Yorkers that have accumulated into leaning drifts across my side table, check out a pile of library books from the new-books section (Americanah, Dissident Gardens, The Good Lord Bird, How to Get Filthy Rich in Rising Asia, We Need New Names…), and read a weighty, somewhat challenging classic for my life list.

As birdwatchers know, a life list is a meticulously maintained record of birds that one has positively identified in the great outdoors (i.e., zoos and aviaries don’t count) over the course of one’s lifetime. The term neatly conveys to other lifelong pursuits, such as the visiting of iconic destinations, the doing of daring exploits, the eating at Michelin-starred restaurants, etc. (These tallies are also referred to as bucket lists, but I prefer the term life list, as it puts the emphasis on, well, life, rather than on one’s fated destiny of obliteration from the corporeal world.)

Last summer, my life list novel — they are always novels — was Swann’s Way. (Barring an early demise, all six of the In Search of Lost Time books will gradually be added to my life list.) The previous year, in conjunction with a trip to Iceland, it was Independent People (highly recommended!), and the year before that, Dream of the Red Chamber. On summer cross-country car trips with my husband, while one of us drove, the other read aloud Anna Karenina and The Glass Bead Game (not recommended at all!).

So, the summer is still early, and I have not yet settled on which life list novel to read. War and Peace, a perennial summer favorite, is a contender, but not the only horse in the race. Another Russian book, The Gulag Archipelago, keeps accusing me from the bookshelf. But gawd, what gloomy fare, even if I am sitting on a beach under a thatch umbrella with a caipirinha in my hand.

Also in contention is Absalom, Absalom!, which, at only 378 pages, would not generally be considered weighty-tome length, but it is one massive Faulknerian lump of text with very little white space on the pages. Gravity’s Rainbow? Probably not this summer. Probably not any summer.

Perhaps something Dickens, David Copperfield or Nicholas Nickleby, low on the challenge index but high on page count; or something Dickensian, like the much-praised (as well as much-maligned) The Goldfinch. Or an overlooked classic like Villette. Maybe I’ll finally have the courage to tackle the great beast itself, Beowulf, either the beloved Seamus Heaney translation or the just-published J.R.R.Tolkien version.

My head is spinning. I need another caipirinha.

A brief history of the tale that binds us