My Year in Entertainment

A rundown of the best things I’ve read and watched. 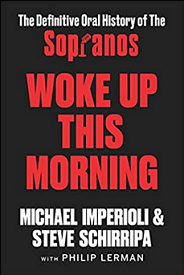 It’s time for my annual end-of-the-year column about some the books, movies, and television that made an impression on me.

(Since this is my first such column, and I don’t even buy green bananas, I’m not sure the “annual” thing will hold up. But I am ever hopeful.)

By the way, I include other media here because some of it is so damn well written and often provides me with story ideas.

“Frankly, We Did Win This Election” by Michael C. Bender. An inside look at Trump’s disastrous (for him) last year in office. Bender was the Wall Street Journal reporter who covered Trump for five years. He was friendly to many administration bigwigs but always kept his objectivity. From Trump’s pandemic response (or non-response) to the Jan. 6th Insurrection, Bender’s account is both readable and frightening. The title, by the way, is used facetiously by the author (who proves in the book that Trump lost).

Woke Up This Morning: The Definitive Oral History of the Sopranos by Michael Imperioli & Steve Schirripa. Imperioli (who played Christopher Moltisanti) and Schirripa (Bobby “Baccala” Baccalieri) have written (with help from Philip Lerman) an informative and often hilarious insider account of “The Sopranos,” perhaps the most groundbreaking TV drama of all time. The HBO series paved the way for cable TV to become the powerhouse it is today. As indicated by the title, the book is an “oral history” in which Imperioli and Schirripa interview fellow cast members and detail the creation of many of the classic episodes. A fascinating look at how celluloid (or videotape) magic is made. The sadness of star James Gandolfini’s death is obvious. He was generous to a fault with both advice and money. But the book is a celebration of his — and everyone else’s — art. I liked it so much, I’ve given it away as a Christmas present!

The Icepick Surgeon: Murder, Fraud, Sabotage, Piracy, and Other Dastardly Deeds Perpetrated in the Name of Science by Sam Kean. The title alone is enough to make one buy this book! Kean is a funny and facile writer who proves that facts are indeed stranger than fiction. His tales of slavery, graverobbing, experiments, killing, and mayhem are not for the squeamish. But I dare you to put the book down once you start it.

“The Sopranos.” Once I read the tell-all mentioned above, it was a given that I would have to re-watch the series, which ran from 1999 to 2007. As it turned out, not only had I forgotten some of the episodes, but many were new to me. (That’s my story, and I’m sticking to it.) Fortunately, the library system in Naples, FL, where I live, is one of the best in the nation. Its main branch, near my home, looks like the Hearst mansion, and I have access to all 88 episodes on DVD. The writing is spectacular. What started out as a show whose makers worried wouldn’t have a second season became a ratings juggernaut that famous Hollywood and international actors begged to appear in. But great as some of them were, none could hold a candle to James Gandolfini, who played Tony Soprano. Anyone who has seen Gandolfini in “Get Shorty,” “Zero Dark Thirty,” “True Romance,” “Crimson Tide,” “The Last Castle,” “The Taking of Pelham 123,” and other films knows just how great an actor he was.

“The Big Lebowski.” I finally broke down and watched this 1988 gem. I had long misjudged it as a film about whacked-out druggies, but it turned out to be a very funny, if scatological, crime caper. Jeff Bridges is great as “The Dude,” but John Goodman and John Turturro steal every scene they’re in.

The New Yorker. Okay, it’s not a book, movie, or TV show. It’s just the best damn magazine in the universe. I don’t agree with all of its positions, but its long articles (some too long) are works of art and feats of brilliant reportage that have provided me with innumerable ideas. The cartoons are funny, as well, and I am determined to win one of their caption contests before my bananas ripen. By the way, I must also give a nod to USA Today, which does some great in-depth stories on many of the issues we should all be concerned about. It’s another superb idea-generator for writers.

[Editor’s note: “The Wire” is the most groundbreaking TV drama of all time. Everybody knows that.]

When not reading, watching TV, or avoiding household chores, Lawrence De Maria writes mysteries and thrillers, more than 25 of which are available in print or digitally on Amazon or at www.lawrencedemaria.com. His latest thriller, Hope, just out, has his private-eye protagonist channeling 007 in the Caribbean, with predictably dire consequences.

When the Muse speaks up, better write it down!