Watch What You Read

Following your favorite characters to TV 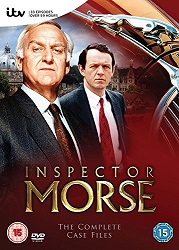 As I have noted before in this space, I am a firm believer that good readers make good writers. The more you read, in a variety of genres, the better you will hone your craft. I will now amend that to argue that thriller and mystery writers (such as moi) should watch BBC crime dramas.

To tell you the truth, I don’t know if some of those shows turned me on to the authors on whose books the TV series are based, or vice versa. No matter. All I am certain of is that my coffee table is now covered with British mystery novels and DVDs. (Many of the shows are also available on PBS, but who knows how long that will last in the current Luddite environment?)

Right now, I am in full thrall to Chief Inspector Morse, the irascible, self-destructive but brilliant detective who solves murders for the Thames Valley Police in Oxford, ably assisted by Sergeant “Robbie” Lewis.

It has gotten to the point where I find myself craving the occasional pint at lunchtime in an English pub. That is actually (a word Morse hates but which I actually like) not all that difficult since I live pretty close to several Florida taverns that style themselves as pubs. One of them is even named “The English Pub” and has about 100 beers and ales in bottles or on tap. These quasi-pubs even serve fish and chips and bangers and mash, both of which I like. But they also offer some weird stuff like fried pickles and scotch eggs (a hard-boiled egg wrapped in sausage and parmesan bread crumbs, fried, with pub mustard) that make me glad we won the Revolutionary War.

For all I know, they’re the reason there was a Revolution.

Morse is the creation of author Colin Dexter. Dexter was closely involved in the televised productions and, indeed, does a brief Hitchcockian appearance, unbilled, in every episode. In the 1990s TV show “Inspector Morse,” the detective is played by the inestimable John Thaw. Dexter so revered the character that he added a codicil to his will saying that no other actor could ever play Morse. Kevin Whatley played the long-suffering Lewis, whose diction and lack of pretense are often mocked by the insufferable Morse. Of course, both men are fast friends beneath the banter.

Alas, both Thaw and Dexter are dead (Dexter passed away just a month ago). But the dozens of books and TV movies they left behind are pure gold to the mystery writer. And “Inspector Morse” spawned “Inspector Lewis,” a long-running sequel that, like “The Godfather Pt. II,” is every bit as good as its progenitor. Whatley reprised his role and has his own sidekick, Sergeant James Hathaway, a brilliant Oxford man who spends a lot of time correcting Lewis’s diction. The poor copper just can’t win.

The characters in the movies, some of whom are played by superb British and American actors (Sir John Gielgud being one), are so nuanced that one can’t help remembering them when writing one’s own characters.

I actually (there’s that word again) prefer the books, since it’s easier to read English than to understand some of the British accents on TV. (George Bernard Shaw once said that “the United States and Great Britain are two countries separated by a common language.” Shaw was Irish; I often have trouble with their accent, too.)

Colin Dexter breaks just about every rule of mystery writing that I thought existed. He starts off each chapter with a quotation from some book, play, or personage, most of which are new to me. And they are not restricted to the usual literary suspects: Keep your eyes wide open before marriage, half shut afterward (Benjamin Franklin); Horse sense is something that a horse has that prevents him from betting on people (Father Mathew); The overworked man who agrees to any division of labor always gets the worst share (Hungarian proverb); Life, within doors, has few pleasanter prospects than a neatly arranged and well-provisioned breakfast table (Nathaniel Hawthorne); Facing the media is more difficult than bathing a leper (Mother Teresa).

After a while you don’t even bother trying to connect the quotation with what’s in the chapter it heads. You just take it on faith that it has some relevance.

Dexter often also uses parentheses and asides to explain what is going on, and throws in literary references, crossword puzzles, obtuse riffs on music, and fake news stories, all of which I believed mystery writers were not supposed to do. But since he has won just about every mystery writing award on the planet, and his books are so damn entertaining, it’s obvious that I have a lot to learn.

Which, of course, is my point. Good readers make (hopefully, in my case) better writers.

Lawrence De Maria, once a Pulitzer-nominated New York Times reporter, has just released his 17th self-published novel, Shadow of the Black Womb, an Alton Rhode mystery. His books are available at ST. AUSTIN’S PRESS (BOOKS BY DE MARIA). Coming back from a Florida pub, he often finds himself driving on the left side of the road, but he thinks it may be the beer.