It’s time for a shout-out to Mrs. Claus. 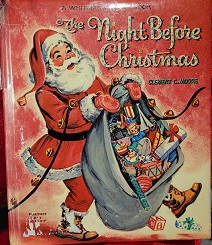 Okay, I admit it: I’m a Santa Claus freak. I love all things Santa. My parents raised me with a mystical reverence for him, the Big Man brimming with whimsy and magic. A happy character filled with Christmas cheer whose only goal is to make children’s dreams come true.

Every Christmas Eve, my father read Clement C. Moore’s The Night Before Christmas. The actual edition was a Whitman Pillow Book published in 1966 (although the illustrations by Florence Sarah Winship looked like they were from the 1940s). I’d given my father that book in 1967, when I was 5.

Since then, although my heart still adores the concept of Santa, my appreciation for Mrs. Claus has skyrocketed.

I know it might be different for other families, but in mine, my father played the illusory role of St. Nick (in later years, eating the McDonald’s Big Mac and Diet Dr Pepper he insisted we leave out instead of cookies). He also retrieved gifts from the car. And, of course, he read the book. But his Santa duties ended there.

I didn’t realize until I was grown, with kids of my own, that my mother (I’ll refer to her as Mrs. Claus) was the true power behind the Santa fable. She baked all day on Christmas Eve — our kitchen looked like a hurricane of flour, frosting, and cookie crumbs had blown through — then delivered plates of goodies to friends on my father’s list.

Later, we ate dinner at a favorite hamburger joint and drove around the ritzy neighborhoods looking at holiday lights before returning home, where we all snuggled into a contented sleep.

Everyone but Mrs. Claus.

My mother stayed up all night wrapping gifts to put under the tree, and after a few hours of sleep, rose early to put the turkey in the roaster. She was so tired on Christmas Day that I doubt she enjoyed herself. She was the unrecognized heroine of our celebration, while Santa got all the credit.

So, this year, I addressed my holiday letter to the Mrs. behind the Claus:

Thank you for making sure Santa stayed healthy during the year; I know you monitored his blood pressure and cholesterol intake. I’m sure you cooked him nutritious meals and made sure he took his meds. Thank you for handling the chores required to run a household while the Big Man oversaw toy-making and list-sorting.

If Santa ever suffered from depression, I’m sure it was you who lifted his spirits, even insisting he see a therapist if necessary.

While the elves worked on filling Santa's bag, you wrapped the presents under your own tree after shopping for perfect gifts for everyone. And, of course, you baked and delivered all those delicious treats you made yourself.

Thank you, Mrs. Claus, for making yet another spectacular Christmas possible.

A Woman Who Understands

To all the uncelebrated “Mrs. Clauses” out there, YOU GO, GIRL! I see you.

What I was reading when…