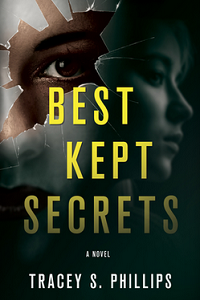 It’s clear that author Tracey S. Phillips is an expert in flexibility. Yes, she practices yoga, and yes, she’s a piano teacher. But she also writes novels across multiple genres and publishing platforms.

Phillips’ first novel, Best Kept Secrets (BKS) — a police-procedural thriller featuring a gritty female detective — was traditionally published by independent press Crooked Lane Books (CLB) in 2019. Then, while banging out a sequel and also writing a standalone thriller, Phillips began writing romantic suspense. She plans to experiment with that genre by self-publishing her newest novel, Elements of Submission (E of S) — a steamy romantic thriller — under the pseudonym Karissa Knight.

Phillips has found that there are many publishing options available to writers these days. But how did she know which was right for her?

“I’ve been writing for only 11 years, but during that time, the writing industry has gone through sweeping changes. Before, most publishers and agents still offered the option to send your manuscript via snail mail. Now, it’s rare that anyone will look at your thick stack of paper, let alone return the material.”

She continues, “Back then, industry professionals advised against self-publishing. If an author self-published and didn’t sell thousands of books, you were doomed. No traditional publisher would want your subsequent books. Early on, I made the choice to go traditional. Besides the stigma of self-publishing, I had another reason — I already owned a business. I’m a piano teacher and do all my bookkeeping, scheduling, and marketing. There was no way I wanted to start up another business.”

When Phillips first began writing, she penned a romantic suspense novel that she just knew would “rock the publishing world.” But no one was interested, so she followed the advice of “experienced gurus”: “I wrote something different, pitching my recent works to agents and going to conferences.”

She also participated in the Twitter event #Pitmad, hosted by @Pitchwars, creating a catchy logline that got an editor’s attention.

“Crooked Lane Books picked me up without an agent and published BKS. But the timing couldn’t have been worse. My mom had just passed away, and when my book hit the shelves, I didn’t have a strong platform. My publicist at CLB left within weeks of the release. Then a pandemic hit. A few months later, my editor left CLB, too. I became an orphan.”

When the pandemic struck, the publishing world suffered along with everyone else. Phillips also felt somewhat betrayed by traditional publishers, so she made some changes.

“I decided to blow the dust off that romance I’d written years ago. By then, I’d developed a network of authors, many of whom are indie published. I studied the ins and outs and, encouraged by my friends’ successes, I knew there was no better option. It took years of trial and error — and even a traditional publishing contract — to decide to self-publish my book.”

Phillips has some advice for other writers considering the self-publishing route.

“There is no singular marketing ploy — blog tours, social media, flash sales, etc. — that will sell your book…Learn your genre and market your books to those readers. Find a tribe of supportive authors and learn from them. Go to conferences and read about the industry. Don’t be afraid to try something new but do what you feel comfortable with and what you can afford.”

How does Phillips switch between writing police-procedural thrillers and writing spicy romantic suspense?

Readers of romance, however, “want their guy (or girl) to be a handsome devil, and they demand heat between the two main characters. I don’t find it difficult to weave this added relationship into the story. Even with thrillers, there are relationships that evolve and devolve. It’s just another aspect of the book, an added character trait, a friendship or love to deepen the story.”

Although Tracey S. Phillips and Karissa Knight both write about “fierce women who embrace their shadow side,” Phillips found the need to create a separate brand under a pseudonym.

“Since I teach children, I needed to differentiate between the two genres I write. I didn’t want my students to visit my website and find the Elements books with strong sexual themes. That said, I will eventually merge the two brands — I won’t always be teaching children.”

During the pandemic, with bookstores and libraries closed, Phillips knew people needed fresh entertainment. She also wanted to give back to her writing community, creating the organization Blackbird Writers.

“The group falls under the umbrella of mystery, but we represent authors of thriller, cozy, police procedural, children’s, historical, and psychological suspense, both traditionally and independently published,” she says.

“Together, we share each other’s successes and events, and promote each other’s work. I realized how much more powerful many voices are. Blackbird Writers is now an organization of about 20 authors, and our motto is, together, we soar.”