The famous rhymes are a gift to language 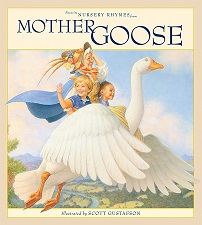 Among the early memories I retain of the formation of my identity (thinking about my names, first, middle, last, plus a nickname; trying to decipher how my family relations worked), few stand out more than the profound awareness I had (when I was 5, sitting in the back seat of a car with two adults, five children, and the radio playing) that each individual person speaks their own individual language.

I’ve always cherished this notion, and it may help explain why I became a student and artificer of English. If we all spoke a common language, there would never be miscommunication or misinterpretation. There would never be frustration at communication, nor animosity in expression. Everyone would understand each other. Older brothers would never hit their younger brothers. Little children wouldn’t cry, and their parents wouldn’t bark at them, “You’re driving me up the wall!”

Of course, linguists have a word for this exact concept, idiolect, and, while it doesn’t suggest different languages for every single person, it says that every person comprehends and uses their native or adopted language in their own idiosyncratic way.

“Id” is the root for idea, idiot, and id, so we’re talking about something so fundamental that it’s both universal (in the sense that a person can live their entire life in just one language and have a universal human experience of life) and specific to every single person who uses language. It’s a fine paradox upon which to meditate.

I love such meditation, and I don’t have to search far in my experience of learning English to recognize the treasure of idiolect that is the collection of nursery rhymes under the folksy moniker Mother Goose. Of course, I didn’t know what Mother Goose was doing to me in my earliest days, but the list is long: gaining familiarity with the rhythms of spoken English — introduction to plot — playing with meaningless nonsense — learning ejaculatory pronouncements — combining words and music, etc.

No single Mother Goose rhyme is enough to demonstrate her foundational method and madness. “Simple Simon met a pie man.” “Humpty Dumpty sat on a wall.” “Jack be nimble.” Mother Goose is like Mad Libs, the structure is always there but the content is infinite and capable of mind-torqueing bizarreness — “Hey diddle, diddle, the cat and the fiddle…” It’s like an impenetrable koan.

The developing mind of the child has no conception of what this could mean, a playful paradox. Language is supposed to convey ideas. As a child, when I looked at any of the illustrations for this ubiquitous verse, they couldn’t assist me: “…and the dish ran away with the spoon.” At the same time, a cow jumping over the moon is an inescapable childhood image.

But Mother Goose isn’t about an honest depiction of reality, she’s about expressing oneself in the regular patterns of English: subject, verb, object. The absurdity is what makes it fun. Her nonsense helps children to make sense of the world and the complex, difficult communications between people.

Mother Goose, as a character, came to England most directly from the French, Mere L’Oye, at the time when mass publication and distribution of printed material was beginning. As she developed in early 18th-century England, she absorbed verses from many sources, many voices, many anonymous authors.

She became a frame to the storytelling, comparable to Joel Chandler Harris’ Uncle Remus, a fictional, friendly folk-story-teller, an entertainer, moralist and subversive, a keeper of others’ words and tales. She was also a conveyor of the uncanny, an unpitying realist, able to face the great uncanny-maker, death, with insouciance. “It’s raining, it’s pouring, the old man is snoring, went to bed and bumped his head and couldn’t get up in the morning.” (Or is that about sexual impotence, etc.?)

The glory of absurdity, the eternal pleasure of unexpected, ambiguous language, is that it teaches the mind to be prepared for anything, to consider varied possibilities naturally. Awareness of the binary nature of idiolect is a discipline of the most enjoyable order.

Mother Goose returned to my life when I had children, and it was then that I realized all these deep, wide things about her. I saw how she drew out and illuminated my sons’ minds, how they grasped at her structures and rhythms, reproducing them in their sing-song daydreams. I loved to sit with them and gaze at an open Mother Goose book with little illustrations all over the page.

For each, over the course of three or four years, they went from looking at the pictures to reading the words for themselves. Mother Goose provided the basic building blocks of their learning to read because they were familiar with all those sounds, comfortable with the musical nuances in spoken words. This is a gift from the many Anglo-Saxon generations which gives itself again and again to the future.

So, I say, Vive la Mere L’Oye! May she forever teach us to understand and appreciate the many languages we hear every day.