Nero Wolfe: a locavore ahead of his time 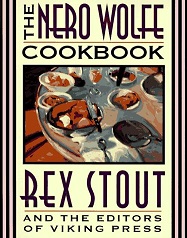 “Farm-to-table,” “locavore,” and every other permutation of locally sourced food seems ultra-contemporary. It is a concept that those of us who enjoy cooking and eating are happy to embrace as we patronize the farmer’s markets, community-supported agriculture, and other ways to buy fresh, local food.

But for those of us — and we are legion — with a fond place in our hearts for a fictional detective who was one of America’s first gourmets, none of this is new.

Rex Stout’s sedentary detective, Nero Wolfe, who appeared in a series of novels and short stories from 1934 to 1975, relished his eggs au beurre noir and his shad roe, among many other delicacies, but he was careful to source his food so it was as fresh as possible.

For non-foodies, the mysteries are best known for their clever plots, saucy language, and Wolfe’s devotion to cultivating orchids. But for others, like myself, the detective’s passion for food and cooking was contagious and contributed to my own gourmet pursuits.

Take corn. In Murder Is Corny, narrator Archie Goodwin, Wolfe’s sidekick, describes how his boss arranged with a farmer in Putnam County to deliver 16 just-picked ears to his Manhattan brownstone every Tuesday from July 20 to October 5.

As Wolfe explained to Inspector Cramer, his ally and nemesis in the NYPD, corn should not be boiled in water, but should be roasted in the husk in a hot oven for 40 minutes within three hours of picking. Shucked at the table, eaten with butter and salt, it is, the detective affirms, “ambrosia.” Starlings, just two hours after being shot, are delivered to his door each May by another New York farmer (The Golden Spiders).

Though he rarely traveled, Wolfe tried to eat local wherever he was. When he visits Archie’s sometime girlfriend, Lily Rowan, in Montana, Wolfe bargains with her that he will make his special trout Montbarry on the condition she will go to the creek, not the river, and fish for the smaller trout he prefers.

Wolfe, whose backstory had him born in Montenegro and engaged in a shady past as a spy for the Austro-Hungarian Empire, had some tastes that were not so local. He preferred wild thyme honey from Greece (Fer-de-Lance) and fresh figs flown in from Chile (Champagne for One). He had pigs especially raised in Georgia on a diet of peanuts and acorns and cured to his specifications so his breakfast ham would be sweet enough (A Right to Die).

Described variously in the books as weighing in excess of 300 pounds or one-sixth of a ton, Wolfe made do with lamb for shish kebab, even though fresh kid would be better. But fresh kid, properly butchered and handled, “was unattainable in the metropolitan era” (The Father Hunt). Modern practices may be catching up, however, as everything goat becomes more popular here.

One specialty that appears repeatedly in the Wolfe mysteries is shad roe — served aux fines herbes (The Final Deduction), in casserole (The Mother Hunt), with creole sauce (If Death Ever Slept), and in a mousse (Too Many Cooks). When asked about the prevalence of shad roe, Stout said he must often have been writing in May — something to keep in mind as shad roe season approaches. (Stout wrote only one book a year, taking just a few weeks from start to finish.)

Archie often found this fresh fare too rich, and yearned for a corned beef sandwich with a glass of milk. When shad roe once again made its appearance on the table for lunch, larded with pork and baked in cream and herbs, Archie complained, “Every spring I get so fed up with shad roe that I wish to heaven fish would figure out some other way. Whales have” (The Final Deduction).

But for mystery aficionados, Wolfe’s devotion to fresh ingredients in gourmet cooking was well ahead of its time and a model for those of us enjoying the contemporary celebration of fresh, local food.