Binge-Reading for a Lockdown

A Gallic antidote to the pandemic. 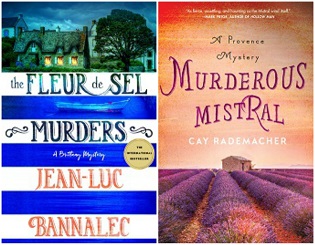 The coronavirus lockdown has brought a cornucopia of lists for binge-watching on TV and a fair number of lists for books to read. Many of the book lists are worthy — perhaps too worthy for the distracted state we find ourselves in.

My own solution is binge-reading mystery series set in France. There is a personal element of homesickness for me since I lived in that country for 11 years, but I think anyone confined to quarters and unable to visit one of the most-visited nations on the planet can benefit from these armchair sojourns.

It began for me with The Fleur de Sel Murders by Jean-Luc Bannalec, featuring the curmudgeonly Commissaire Georges Dupin, but most of all featuring the balmy environs of Brittany’s southwestern coast. A friend pointed out that “Bannalec” is a quintessential Breton name, and indeed it should be because it was handpicked by the German author who hides behind this pseudonym.

Jean-Luc’s real name is Jörg Bong (no kidding), and he works at a German publishing house when he’s not visiting his beloved Brittany. His books are translated not from French, but from German.

In any case, these novels are redolent of the mini-Mediterranean climate in Finistère — the end of the earth, as the region is known. Besides the displaced Parisian Dupin, there are a number of quirky characters and considerable attention paid to food and wine. The descriptions of the esoteric fleur-de-sel business were so palpable that I promptly ordered some of the handcrafted Guerande product online.

In the meantime, I’ve gone back and read the first of the Dupin mysteries, Death in Brittany, followed by Murder on Brittany Shores. Fleur de Sel is number three, so I still have The Missing Corpse (#4) and The Killing Tide (#5) available in English. More are surely on the way, since Bong just published #8 in German, Bretonisches Vermächtnis (The Breton Legacy).

For variety, I’ve been alternating the Breton series with the Camargue mysteries, featuring Capitaine Roger Blanc (commissaires are officers in the French National Police, while capitaine is a rank in the National Gendarmerie, a branch of the armed forces that covers small towns and rural areas).

Not coincidentally, because Germany is the sixth-largest book market in the world and a leader in crime fiction, the Camargue series is also written by a German, Cay Rademacher, who uses his own name. He had an earlier series set in postwar Hamburg, where he worked before he decamped to southern France, but that one is considerably grimmer and better suited, perhaps, to a non-pandemic environment.

Murderous Mistral has Blanc, also a displaced Parisian, trying to solve a case amid the cold wind blowing through the Rhone Valley into the Camargue region on France’s southern coast. In Deadly Camargue, Blanc is on the trail of a murderer who has discovered something about Van Gogh’s stay in nearby Arles.

These are the only two books in the series available in English, though four more have been published in German. As with the Dupin series, the novels feature alluring descriptions of a French landscape in Provence markedly different from the one in Brittany.

For binge-watchers, the Dupin books have been filmed in a German series, “Inspector Dupin,” available here in subtitled version on MHz Choice. (I found the casting at odds with the books’ descriptions, and the TV version lacking their charm, so I passed on the series.)

For Francophiles, there is another MHz Choice offering unrelated to either of these book series called “Murder in…” with a different French locale following the dots in each of five seasons’ worth of episodes. The locales are invariably charming and the leads generally sympathetic, though the episodes are uneven in quality. But it all makes the lockdown more bearable.