Through her many books, journalist Gessen shines an unsparing, incisive light on Russia 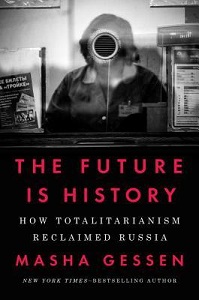 Masha Gessen uses various italicized Russian words in her new book, The Future Is History, to express the inexpressible, to establish her credibility. My favorite is fortochka; it means a little window inside of a bigger window to open on the deepest winter nights and freshen the stale air within a home.

A perfect metaphor to contemplate Russia’s closing of the fortochka of post-Soviet potential and “freedom,” and the stifling air of Putin’s totalitarian state. Gessen has been observing this world intensely for a while now, and her new book carries with it the force of her other works, an accumulated mass that is frankly astonishing.

She has contributed to the New Yorker, including this podcast with Tom Ashbrook at NPR, about her newest book. She has nearly 53,000 Twitter followers. She is a regular contributor to the New York Review of Books. She wrote a tour-de-force piece on the Coming Crackdown in Harper’s last summer.

If you want to know what a dynamic thinker with an intense spirit can do in the face of dreadful, overbearing bureaucratic resistance, look no further.

She has written on the seismic social changes brought about by the fall of the Soviet Union and the mortally perilous state of gay rights in Russia today. She’s written a deeply personal book about how her grandmothers, Ester and Ruzya, survived World War II and Stalin’s madness.

She’s written about the future of genetics and designer babies in Blood Matters; theoretical mathematics regarding Poincare’s Conjecture in Perfect Rigor; and Pussy Riot in Words Will Break Cement. She’s written a biography of Putin, The Man Without a Face.

If you’re not astonished yet, I’ve left five other books off the list (including The Brothers, about the Tsarnaevs and the Boston Marathon bombing, in which she suggests that Putin was the instigator).

Gessen is concerned with how the individual grapples for power with the state and is, therefore, working against Putin. She’s been a thorn in the autocrat’s side for some time, and one doesn’t have to imagine much to worry for her safety. She is relentless in discovering, studying, and meditating upon the microcosmic examples of her great social themes. She seeks out the individuals who are caught up in the machinations of the state and reveals their struggles and sorrows.

Which is why I can’t help but read her most recent work, the National Book Award-winning The Future Is History, as a magnum opus. In it, Gessen profiles four people who were born too late to remember anything about the Soviet Union, except its breakup, and recounts their lives from the time of the collapse of Communist Party control to today. A vast sweep of ambition stands foremost in this work.

Writes Gessen in the prologue: “When I was eleven or twelve…my mother told me that the USSR was a totalitarian state — she compared it to the Nazi one, an extraordinary act of thought and speech for a Soviet citizen. My parents told me that the Soviet regime would last forever, which was why we had to leave.”

They were fleeing anti-Semitism and looking for a new chance. Her parents brought her to the United States. She went to high school in Boston and studied in New York before returning to the Soviet Union in 1991.

“When I was a young journalist, in the late 1980’s, the Soviet regime began to teeter and then collapsed…or so the story went…I spent my thirties and forties documenting the death of a Russian democracy that had never really come to be.”

The dramatis personae in The Future Is History are laid out in the introduction. All are compelling witnesses, but none are more important to me than Zhanna Borisovna Nemtsova, born in 1984, and the daughter of Boris Nemtsov. (The father and daughter’s story, in relation to the state’s, is a book in itself.)

Beyond the main characters, Gessen follows sociologist Lev Gudkov, who has been surveying Russian society since the breakup of the Soviet Union with a humbling awareness of all he’d missed from the last generation of academia in the Western world, an increasing realization of how short-lived were the freedoms gained at the fall of the Bolsheviks, and a denouement of having his life’s work taken from him by Putin’s manifestation of “recurrent totalitarianism.”

Another character is psychoanalyst Marina Arutyunyan, who is also stymied in her career. But the work she and Gudkov and Alexander Dugin (an arch-conservative political activist) do allows Gessen to go deeply into various institutional aspects of contemporary Russia.

There is a pinball effect to the energy in the book, much like what one feels in the United States these days, in sociology, history, social media, and politics. Gessen says this effect is intended; a constant state of agitation and crisis is the environment in which totalitarianism thrives. It’s Putin’s main export.

In the sense that Gessen communicates that the fortochka is now closed, The Future Is History stands beside James Agee’s Let Us Now Praise Famous Men and Aleksandr Solzhenitsyn’s The Gulag Archipelago as examinations of the oppressed. But this book deserves attention all its own, and for the crowning achievement it represents for Gessen.

Y.S. Fing had no collusion with Masha Gessen in writing this essay — other than that she autographed his copy of her book.

Weighing the value of anonymous public discourse in the age of Trump.