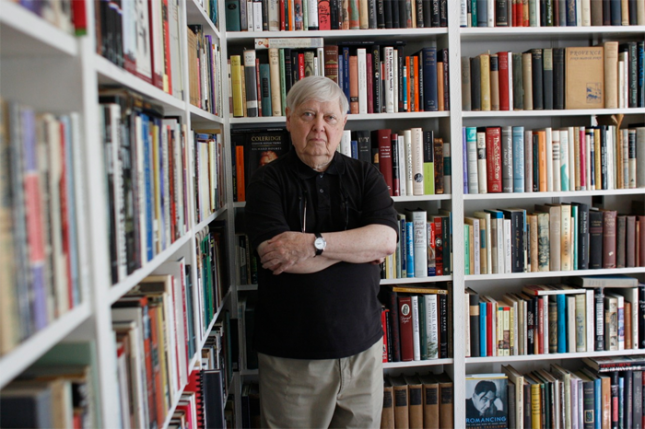 In
1938, the Skizzens pretend to be Jewish and leave Graz, Austria to escape the Nazis.
Their new identities take them to London where the father eventually abandons his
new identity and his family. Joseph, his mother and his sister wind up in small
town Ohio where his sister adjusts and embraces American life while Joseph
experiences the world  through the
library, two colleges, a church basement and a junkyard.

William Gass is the author of five previous works of fiction.  The Tunnel was published in 1996 and thirty one years earlier, his debut, Omensetter’s Luck.  His nine works of nonfiction include Reading Rilke, Tests of Time, and Life Sentences.  Mr. Gass has received many awards and honors including grants from both the Rockefeller and Solomon R. Guggenheim Foundations.  Three of his seven volumes of essays have won National Book awards.  He also founded the International Writers Center at Washington University.

This reader spent two weeks with Joseph Skizzen, your main character. How long did you spend with him? Did he leave a lasting effect?

To answer this question strictly would be to accept its assumptions, which I cannot. A character is no more than a character. Making him took an entire book. I have no idea how many hours I spent doing that.

In literature, it always seems as if a small town is the place where one could misunderstand the world and be misunderstood in peace. Why is it easier in a small town?

That may be what authors, often dependent on personal experience, think. Urban environments encourage privacies for safety’s sake and encounter[s with] others through public affairs. Small towns have fewer such opportunities. But in literature anything is possible.

How amazing that Joseph Skizzen, as a young man, comes to understand that his music teacher’s heart has an attic. Was this the beginning of his fondness for high and secret dark rooms? How do old music teachers shape their students? Did you have a piano teacher as a young man? Can you play an instrument? If so, how does music influence your writing?

I didn’t know Mr. Hirk had an attic. I don’t know how old music teachers teach the young, or how young teachers teach their elders either. I had no musical education and can’t play anything. I do love classical music, though, especially operatic.  (On page 40, Joey thinks his piano teacher is finally reaching out and “opening his heart’s attic to him,…”)

Music is the most mathematical of the arts.

Joey spends his life on two college campuses and never really seems to learn anything that he can apply except that man is inhumane and maybe doesn’t deserve to continue to exist - which he still can’t quite decide. Is the ordinary college experience useless these days? Even with an unorthodox approach? What about futurists and others like Ray Kurzweil who believe rote memorization is a thing of the past? Students should start taking on projects, success and/or failure are better teachers than a classroom? Would you agree? Why?

He learns a lot in the library. The ordinary education isn’t an education. Such students sometimes learn how to be social. They could learn as much in a community college. The wise student, trying to decide where to go to school, should choose the school with the smartest and [most] diligent students. But I have been out of touch for a decade. Practice is what shoemakers did a century ago. Skills (music, law, building, business, etc.) may enable one to cope and even succeed in a get-ahead world. Not create a civil society.

“It must be rather wonderful to assume that the world would receive with interest whatever came into your head.” Joseph thinks this when he meets a woman in the library but might this also be what a writer feels, an underlying reason to dare to write? And to expect a reader?

Writers vary enormously about these matters. Some good writers do so for selfish reasons, some earnest writers are flops.

They often like to keep diaries and journals which they say are private all the while composing for mankind. Private letters are composed carefully as if the world were about to peek. Those I like best make these verbal arrangements as if for a party whether there is a party.

Are you ever afraid that instead of your imagination, readers will believe that you’ve simply written about yourself?

I am not afraid. I expect it. Critics who know better still do it. Writing The Tunnel I encouraged readers to do that. It is what everybody likes. In The Tunnel I set traps. Not in Middle C.

You liken violets to immigrants: Miriam and Joey learn that there is nothing particularly nice about violets. The flowers “invaded what little lawn was left, and every other area that offered an opening…well…like immigrants, pushing out established plants and covering the earth with an impermeable carpet of dainty-looking but devilish little flowers whose rootlets, in their eager expertise of total war, throttled worms in their runnels.” Miriam has to destroy the violets and as she does she forgets about her own history and begins her own resentment of the new foreigner. Would destruction and forgetfulness make another charming couple? Do we forget so that we can begin again?

Can anything be normal once it appears through the lens of a story?

Stories have a metaphorical relationship with the world. The world also changes the story.

Joseph learns that the extraordinary gift of thinking is always high jacked to dimmer purposes such as excusing lies and justifying envy. What if he’d had at least one idealistic professor? Would it have made a difference? What would the formula be for using the gift of thinking properly? Can we save ourselves and protect this marvelous gift?

Better philosophers than we’ve had should set their minds on this. Hume has so far won. Reason is only an instrument and does not create intrinsic ends.

Joseph never really experiences love for a woman and maybe it’s the reason he’s afraid of them. “Most men lived on the love of women like weevils in a biscuit.” Or maybe his mother has scared him with her descriptions? Eventually the biscuit gets eaten.

You are forgetting, this is a novel. Characters have psychologies but they are also fictional. In one book it is Freud in another Dewey.

“He knew what fear was: strings of feeling tied into a numbing knot.” Overtly he feared being discovered but what about the subtle fear that pervades his entire life, that lets him live under a cloud that he doesn’t even recognize? Fear has a life-altering component whose weapon seems to be ignorance of its existence, so that one can think one is guided by reason when in fact, one is almost completely governed by fear. How is it that fear and reason can so easily change places?

See Hobbes, the master of fear. If Joseph has suppressed his desires for his sister (both sexual and for a kind of life), then they can, by him and the reader only be inferred. Don’t forget, this is a novel.

Orhan Pamuk wrote The Museum of Innocence and it reminds me of Middle C. The characters in each book are collectors. They start out somewhat comical or at least interestingly, and then you realize that they are actually making mausoleums for themselves. It isn’t a serenade, it’s a dirge. Are you a collector? If so, what do you collect?

What took so long between this book and the one before? Has it gotten any easier or harder? Why?

Writing other books. Also some stories. It never becomes easier. Novels take time, an essay is easier. Teaching is very consuming. All round me sit the work of writers whose beauty I cannot boast of. This supports my pride for my profession, my disappointment in my success.

This reader is new to William Gass.  , What should one read next? Should one start at the beginning with Omensetter’s Luck? Do you have any regrets about any of your books that you are willing to share?

What I usually answer to this question, since critics seem to suggest it, is In the Heart of the Heart of the Country and Other Stories or Fiction and the Figures of Life, but I point out that I was in my early forties before I published anything much. I don’t have an early style or a late style either. My critics will list the regrets I should have, I don’t want to help them.

Mary White is the interviewer, an old reader and book lover.