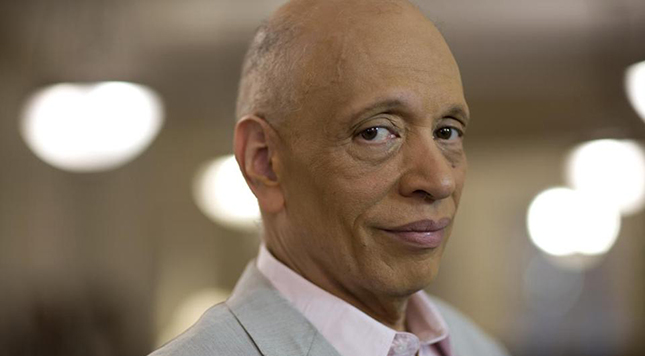 The 11th book in the Easy Rawlins Mystery series. It has been six years since
we last met Easy on the page. This time, Easy wakes up from the edge of death
unsure of whether he wants to keep on living. Thank goodness, his best friend,
Mouse, is there with another mystery that Easy needs to solve. Mouse goads him
out of bed and into the search for Evander “Little Green” Moon, who has
disappeared after a bad acid trip somewhere in the City of Angels. Mama Jo’s
elixir fuels Easy’s strength, and once again he takes to the streets one step
ahead of…

The Q&A with Walter Mosley

Just in case you’re wondering why this Q&A reads like a conversation - it was.  I missed Mr. Mosley when he was in Washington, D.C. I had the privilege of calling him up. Unfortunately, I can’t type as fast as he can speak.  Fortunately, he promises to come back again very soon.

What would readers miss in the evolution of Easy Rawlins if they had not read every book in chronological order?

Nothing. The definition of a novel is a mountain. You just look at it and see the whole thing; the details come as you get closer, you know you’re on a mountain. The short story is an island with a mountain underneath, but all you can see is the island. Each book is a novel, an über novel, so any book is one island and everything that  creates it comes together, so — no.

Would Easy think the world has changed since he was a young man?

People don’t change, but as they get older they become more themselves, and the person you see looks very different than the person that you knew. It’s the basis of the fairy tale for the ugly duckling.

Easy might say yes, and he might say no, but there is a dead white man in his house. He knows he’s innocent, but he knows that by the time it takes to get to trial he might just be a black man that kills a white man, and that hasn’t changed. Some things change, some don’t. For Easy, is the world a better place where he lives? Somebody in Kandahar would be happy to do an apartment swap with the black man in Detroit maybe.

Do you think Easy has an advantage over most folk? He doesn’t trust anyone and the world is an untrustworthy place. Is Easy ahead of the game?

Mouse trusts Easy. Easy’s distrust of people comes from being black. Some say, you worry too much, and Easy says all his white friends say that, and all his black friends say he doesn’t worry enough. He is willing to take his knowledge and make it real in the world, let it make him a private detective in the world. But his basic knowledge comes from hard knocks and that’s really who he is.

You know Easy so well, does he ever surprise you?

When he drove off the cliff, in 2007’s Blonde Faith. Easy is very different and says things that Walter Mosley would never say. I’m not surprised, but would not think them or say them. I’m not Easy.

Sometimes, the other characters surprise me. For instance, I’m surprised that Jackson is reading Cotton Comes to Harlem again and later when they discuss The Invisible Man and Jackson contrasts them. It was a wonderful revelation. They are both intelligent men, Easy and Jackson. But what Jackson says proves he’s smart even if he says it in street parlance.

Have you ever noticed, after a book was published, that you had accidentally neglected to tie up a loose end?

No. Maybe things that didn’t work or could have been better, but not really. There are always things that move from one book to the other, people in the world that make their appearances, but I don’t plan it.

It was a pleasure to read about an old black man in a new book. How many more mysteries are in Walter Mosley? Any more movies?

Rose Gold is coming out in 18 months, more Socrates and Leonid McGill and even Fearless Jones. Debbie Doesn’t Do it Anymore comes out in eight months.

Will Mr. Mosley come back in eight months.

Sure, I’d like to see what kind of questions you’ll ask about Debbie Doesn’t Do It Anymore.

Old Man Tyner once told Easy Rawlins that “Words could be either glue or acid ... the finest inventions that human beings ever made. They build bridges and burn ‘em down. ... some words will at first pull somebody close and then turn him against you in time.” Right afterward Coco says, “You’re looking at my tits.” This seems to me a fine example of both the glue and the acid. What do you think? Was this juxtaposition purposeful or accidental?

Accidental juxtaposition. Ninety percent of all art is unconscious. So some part of me might have meant it, but you can’t think everything you do. People who don’t become artists think it’s somehow conscious and you can think everything that happens in a book, on canvas or in a piece of music, or on purpose. I left it there, so it felt right.

I always ask this question, but not always out loud. Does art have a responsibility?

Do people question you about how you know the story? Wonder if it is too far outside your experience?

They accept and wonder how.  How do you know it? Because I grew up knowing people that knew these kind of stories. Every once in a while someone will ask, but only how. I’m one of the few to write about black heroes.

You ever get tangled up in a mess that you can’t get out of?

Not that I remember. No, I don’t think so. Cases are all messy anyway.

I like the way you portray the hippie community. “You could feel the hope coming off of them in waves.”

It feels different until he kills the white man and then wants to know if the waves come to his neighborhood.

“Sleep coming up around me like a high tide.”  I think this line was wonderful.

Do you have a counterpart, or are you alone out there in the writerly world?

There are a lot of new writers who write black protagonists, but they are not heroes.  James Baldwin and Richard Wright are important; important to have the characters that they have thinking and having experience of what we are and what we do in the world.  When I look at fiction, I wonder what are we looking for? Ever since Homer — heroes.

Black men don’t read fiction because they have a great distrust of it. You’re going to leave me out or put me in in way that I don’t exist. I like when people say I know people like that; people who say those kinds of things make me the happiest.

You have the look of a sad man, but the writing is so exuberant. Which is the most like you, your face or your words?

I’m very funny when I give talks. People are surprised because I look so serious. I’m funnier than I look.

Any books surprise you lately? How good they are? What about how bad they are?

No, not off the top of my head. I read all kinds of stuff, a lot of science fiction, biographies. I love Langston Hughes, Gabriel García Márquez.

[Interviewer breaks in here to say that they have similar tastes in books and that she is always waiting for another Marquez book.]

There’ll be no more books by Márquez. He’s demented. It was published in the last year or so.

His son is going to direct the film version of my book The Last Days of Ptolemy Grey, also with Samuel L. Jackson. The movie will be directed by Rodrigo García, Gabriel García Márquez’s son.

Sure they do. Mama Jo doesn’t practice voodoo, she has knowledge that makes it seem as if it is supernatural. She’s not really a witch. She’s a person that has deep knowledge and curiosity about how things work and has answered a lot of questions and met a lot of people and looks at and in places that most people have shied away from. I would call her a healer. A woman who knows her luminescent micro-organisms.

J. Shepperd was the interviewer.

Russell Banks, author of Affliction, Continental Drift, Lost Memory of Skin and Rule of the Bone talks to Michael Causey for the Washington Independent Review of Books.