Susan Nussbaum’s debut novel, Good Kings, Bad Kings, takes readers inside a state-run facility for adolescent youth with disabilities – which, as one of the characters says, is “just like a regular nursing home, but instead of locking up old people they lock up young people.” 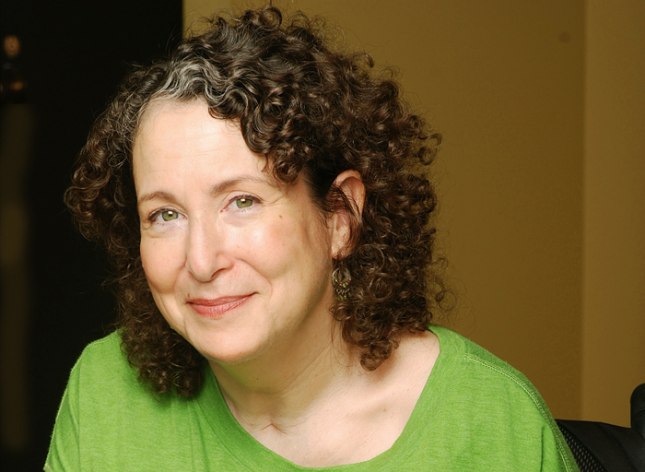 These young people, as well as several folks on the staff, come alive without sentimentality, and often irreverently, as Nussbaum skillfully weaves the story together from their many points of view and in their many distinct voices. Her achievement is even more impressive than such a description suggests, as her characters don’t only have a wide range of disabilities, but also ethnicities, economic opportunities, and sexual identities. The story follows this ensemble of characters as they enter the facility, struggle with its absurd rules and potential for abuse, try to move beyond their troubled lives to form relationships with one another—and to finally make their voices and feelings get heard.

While there are a number of contemporary memoirs written by and about people with disabilities, there is far less in the way of fiction. Why do you think that is? What drew you to fiction rather than nonfiction?

I think bios are often written by non-disabled writers to emphasize the supposed bravery of any disabled person who actually does anything – anything at all.  Probably, much of the autobiographical stuff is out there to present an alternative to the paternalism of the bios.  And some of the memoirs are wonderful.

I was drawn to fiction precisely because there’s very little fiction available by disabled writers.  Or the writers are disabled but their work doesn’t include disabled characters.  And also I’m just not interested in writing about myself.

By writing your book in many diverse voices, each of which is instantly recognizable, you display a remarkable ear. Can you talk about how you cultivated this skill? How much of a role did your experience as a playwright play in your taking this approach to your novel?

I’m bad at metaphors but I do have a good ear.  I can hear a voice and write it.  And of course, writing plays has helped exercise that skill.

Your critique about the inauthenticity of most literary characters with disabilities is well-known in disability circles. In it, you describe how, when you became a wheelchair user in the late 1970s, the portrayals you’d grown up with, from Tiny Tim to Quasimodo to Lenny to Ahab, came to grate on you. Did your reevaluation of such portrayals help you set goals for your own characters?

I’m on the fence about Quasimodo.  But yes, it did help.  Mostly I tried to channel the disabled people in and around my life, so it wasn’t hard to avoid the usual stereotypes.  And of course my own experience as a disabled person was key.  This is a time when it’s important for disabled characters to be written by people who are disabled themselves.  Not to say that non-disabled people can’t use disabled characters in their work.  But disabled people have always been represented in the dominant culture by non-disabled writers.  The tide has to turn.  Disabled writers must define our own experience to the world.  If African American writers had not asserted themselves, we’d still be seeing racist caricatures on stage and film and TV.  (Or a lot more racist caricatures, anyway.) I get so tired, so tired, of seeing garbage out there like Million Dollar Baby or Scent of a Woman.

You are very involved in the disability rights movement. This gives you a level of knowledge, and your book an authenticity, about such things as the mechanics of residential facilities, disability-pride language and publications, antiquated wheelchairs, questionable health-care arrangements, unpredictable family involvement, protest strategies, etc., that we rarely see in literature. It also runs you the risk of presenting your story in a biased way, or sounding preachy, neither of which I felt your story did. How did you avoid those pitfalls?

I try to sneak my bias in by making it necessary to the story.  When my writing sounds ham-handed or didactic, usually that’s because I’ve detoured away from the needs of the story, so there’s a lot of cutting involved.  Much of the time I can self-edit, but I also got a lot of help with that from some friends who read drafts, mostly my sister, Karen, and later from my editor at Algonquin, Kathy Pories. I kept asking the people who read drafts, “Is it preachy?”

Most Americans have never heard of places like the facility in your book. Have you or others you’re close to ever lived in one? How common are they across this country? Why do you think no one ever talks about them?

I’ve never been institutionalized, but being disabled I’m around some disabled people who were institutionalized at one time, or are trying to get out of an institution.  And I’m around the “conversation,” you know? The bigger newspapers have done some very valuable work exposing some of these places.  And disabled people have taken up the issue of institutionalization in a very public way.  There are hundreds, maybe thousands? of nursing homes in every state, plus psychiatric places, places for developmentally disabled people, etc.  Maybe people don’t really talk about them, or think about them, or ever imagine themselves stuck in one.  Segregating people in this way goes back a long way, and most people take it for granted and probably think it’s okay.  People tell themselves certain little fictions – “they’re getting the help they need there”, or “they’re not able to function in the community”, or “they’re happier there”, etc.  We’re all guilty of the out of sight, out of mind syndrome.  But institutionalization is so medieval, so wrong and so very unnecessary.

One of the challenges of writing fiction about a social issue is finding a way to write for two audiences: one that’s had little exposure to the material and one that’s steeped in it. Your book seems to find just the right balance. What kinds of decisions did you have to make during the writing to be so inclusive?

One thing I had to decide was how horrible a place this particular institution would be.  I mean, there’s so much violence and cruelty that I knew the fictional place I wrote about couldn’t contain too much of what I found in my research—no one would believe it.  Also, a little violence in a book goes a long way.  Contrary to movies, TV, Grand Theft Auto, and of course, real life.

When you write about a social justice issue in a fictional context, you have this vast amount of information and you have to narrow that down to something manageable and specific.  You hope that what a single character goes through is so specific to that character, that it conveys more than just the experience of that character.  Does that make sense?

Among the many refreshing aspects of your characters is their sexuality. For one thing, they have sexual feelings, which is one of those big taboos, both in society and literature, when it comes to people with disabilities. To make matters more interesting, your characters are not all heterosexual. How conscious were you of breaking this taboo?

Oh yes, the characters must have sex.  I knew from the start there would be sexually active disabled people in my story.  Not a lot, but enough.

I wasn’t particularly conscious of “needing” a gay character.  But I do have a friend whose voice is very easy for me to channel, and she’s a lesbian.

One of the major subtexts of the book is the role that class plays in the opportunities that are available to us in life. The wealthiest character came by her riches due to a law suit, while several others, including some staff, are barely getting by. In fact, I saw your book as being almost as much about how our society treats children in poverty and the working poor as it treats people with disabilities. Can you talk about the importance of class to your story?

Class is at the bottom of a lot of repression.  If someone is making a lot of money, someone else is suffering.  Too preachy?

Having several characters with disabilities is extremely rare in literature, and all the more so when the disabilities run the gamut from quadriplegia to cerebral palsy to psychiatric disability. To what extent did you need to do research to enter the minds of characters who had a disability with which you were less familiar?

I know people with a lot of different disabilities.  Now and then I’d ask people to explain a little more, but I didn’t have to go online and look anything up.

At first your book seems to be following the individual stories of several characters who are all living or working in this residential facility. Eventually their stories affect one another, to the point where the book grows into a tapestry of love stories—about romance, friendship, and foster families. What do you think this narrative arc is saying about the kinds of facilities you’re writing about?

Okay, it was poetic license.  I hung the story of the hell of institutionalization onto the story of people I hoped readers would want to read about.  And you can’t underestimate the human capacity for resilience.

I would guess you fell in love with some of these characters as you wrote the book. Which ones were they? Are these individuals still living inside you and if so, how might they influence your next creative work?

All that matters is if you fell in love.  I’ll only revisit the characters if it makes sense for the story I want to tell.  I think for me, story precedes character.  But since I’ve only recently begun another book, anything can happen.

Rachel Simon, whose sister has an intellectual disability, is the author of the memoir Riding The Bus With My Sister and the novel The Story of Beautiful Girl.

The first of a two-part Q&A with the author of From Slave Ship to Harvard. The second part will appear Tuesday!