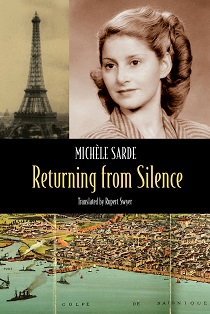 Michèle Sarde was preparing for her First Communion with the other girls in her class when suddenly, her mother, Jenny, informed her that she couldn’t participate in the ceremony because she was Jewish. It was 1951, and the refugees streaming into France since World War II told tales of unfathomable horror.

Traumatized, Jenny had decided to disassociate herself from her Jewish past and raise her daughter Catholic. In the end, though, she withdrew Sarde not for reasons of conscience, but because she was afraid the child’s grandfather, who lived across the street, would see her in her communion dress. The incident created a gulf, a terrible silence, between Sarde and her mother.

Michèle Sarde grew up with little knowledge of her family’s past, but decades later, at a seminar in Thessaloniki, she became painfully aware that there, beneath her feet, lay the Sephardic cemetery where her great-great-grandfather Rafael Benveniste was buried. The realization sparked in Sarde a desire to reconstruct her family’s history. The result is a three-volume memoir, two of which have already been published in France. The first, the internationally acclaimed Returning from Silence, was translated by Rupert Swyer and published in the U.S. by Swan Isle Press last month.

Sarde’s ancestors left Spain in 1492, when Jews were expelled by the Catholic monarchs. They settled in Ottoman Salonika and thrived until May 1913, when, at the end of the first Balkan War, Salonika became the Greek city of Thessaloniki, and Jews became less welcome. When the Great Fire of 1917 destroyed many Jewish homes and businesses, thousands of Jews immigrated to different parts of Europe. Sarde’s grandparents settled in France.

In her riveting memoir, Sarde describes how the first immigrant Sephardim (Jews of Spanish origin) struggled to maintain their identity in the face of Christian pressure and unfamiliar Ashkenazi customs, such as the bat mitzvah. Eventually, Nazi propaganda infiltrated French schools, and Jewish children were subjected to diatribes describing Jews as “subhuman.”

During the Nazi occupation, Sarde’s parents, with the aid of non-Jewish French friends, escaped from Paris and went into hiding in the alps. Her uncle Marcel joined the Resistance and was arrested as a terrorist. Sarde’s powerful descriptions of the public execution of young men not yet 20, jackbooted Nazis approaching her family’s apartment, wagonloads of corpses passing in front of their windows, and the horrors of the camps will give readers chills.

In an interview, Sarde told me that Returning from Silence “was born out of the silence that my mother imposed on me about my Jewish origins. After a childhood spent in hiding and a rootless adulthood, I decided to tell our story.”

At the end of her life, Jenny finally broke her own silence. “My mother supplied the basic material for the story,” recounts Sarde. “She wrote an account and entrusted me with all the records she had kept during the war, including the photographs I used in the book. I didn’t start to write until after her death to avoid any possible discomfort to her. I tried to respect the trust she had shown me by breaking the silence she had maintained during most of her adult life. In the process, I came to understand her better and to overcome the trauma she had inflicted on me.”

Sarde adds that “fiction helps to humanize history. The narration consists of facts retained and transformed in the author’s memory, and although that memory may contain inaccuracies, this transformation conveys a truth closer to reality than can be achieved through the direct reproduction of facts. It is more intimate, more personal.”

She continues, “For example, the ‘reality’ of my origins surfaced almost surreptitiously in a novel I wrote years ago entitled Eurydice Rising, in which a little girl adopted by a Christian family discovers after the war that her biological family has died in the concentration camps. In the case of Returning from Silence, the imagination connects facts both known and hidden, filling in gaps and shedding light on obscure areas.”

In her prologue, Sarde mentions that she had always hidden her name and age, which reveal her Sephardic origins and place her birth at the beginning of World War II. I ask about the significance of names in Returning from Silence, in which Janja becomes Jenny, Moïse becomes Maurice, etc. “In the history of the Jews, the name is of existential importance in the perpetuation of the family line,” she responds.

“During the war, the Nazis identified Jews by their family or even their first names. On arrival in the death camps, tattooed numbers replaced those names. It was by identifying them by name that the ashes of the deportees became human beings once more, and that is why in Holocaust memorials, their names are repeated over and over. To escape the Nazis, many people — my parents, for example — changed their names with the aid of forged papers. I now use my Sephardic name, followed by my nom de plume. That was my way of breaking the silence.”

Returning from Silence is largely a story of displacement. After Salonika becomes Greek, the grandfather Maïr remarks that he feels neither Greek nor Turkish, and so, even before the Great Fire, the Benvenistes are already, in a sense, a homeless people. “What set the Jews apart until the 20th century is that they were a landless people forced to move from place to place by repeated persecutions,” says Sarde. “The Sephardim were wanderers whose roots were their religion and the Spanish language. This sense of exclusion and the Holocaust explain Jenny’s silence.”

Throughout the book, Sarde juxtaposes memory and history. For example, Sarde’s paternal grandmother, Marie Jerusalmi, remembers her native Romania as tolerant and accepting, when in fact it was highly anti-Semitic. Sarde sets the record straight, chronicling with precision events in Romania from 1900 through the post-WWII years.

“History is a juxtaposition of facts,” she explains. “Memory is the filter through which people view history. Marie had a happy childhood in Romania, unaware of the pogroms, and later, of the vile racial policies during the war. Jenny, who had many French friends, downplayed the French government’s collaborationist policies. [Yet] to understand the legacy of Jewish memories, we need to be clear about the facts and the ways different countries behaved toward minorities.”

Sarde’s portrait of Nazi-occupied Europe is as clear as it is horrifying. “Certain passages were difficult to write,” she admits. “I needed to read a huge number of eyewitness accounts and histories of the Holocaust, something I’d always avoided. It wasn’t easy.”

Although they had sympathetic friends, Sarde’s parents had to count mostly on their own survival skills, which may be one of the reasons Jenny disassociated herself from Judaism. “My father and mother were both educated in French schools,” says Sarde. “They loved France and were steeped in France’s culture, language, and values. Long before the war, they had forged ties with non-Jewish French people. I wanted to show that while the government of occupied France deported thousands of Jews, many ordinary French citizens helped save Jews, children in particular. Jenny bleached her hair right after the liberation. She wanted to distance herself from the anti-Semitic image of the Jew: hooked nose, swarthy complexion, dark hair.”

I ask Michèle if writing this book gave her a sense of closure. “No,” she replies, “because I did not say everything there is to be said. This is only the first volume. I’ve already published the second, In Search of Marie J., and I am now completing the third.”

Because she understands that invisibility was a tactic for self-preservation, can Sarde now empathize with her mother’s reasoning behind her embrace of total assimilation? “Today, I can understand Jenny’s reaction right after the war, when the survivors of the camps were returning and recounting the atrocities they had suffered,” she admits. “But I think she was wrong to conceal my identity from me. The revelation caused me an immense trauma. Because of all those stories about the Holocaust, for years, I thought that all being Jewish meant was to be the potential victim of a genocide.”

Nonetheless, she understands. “I can’t blame my mother for wanting to make me like the little Christian girls who had never been at risk. After the publication of this memoir, I realized that Jenny’s story was not exceptional. Many Jews were traumatized after the war and distanced themselves from their religion, shrouding their origins in silence. I’m glad that books like Returning from Silence are enabling new generations to discover long-buried family stories, to retell them afresh, and to make them their own.”

Bárbara Mujica is a novelist, short-story writer, and essayist. Her latest novel is Miss del Río, based on the life of Dolores del Río, Hollywood’s first major Latina star. Her other novels include the international bestseller Frida, based on the relationship between Frida Kahlo and Diego Rivera, Sister Teresa, based on the life of Teresa of Ávila, and I Am Venus, which explores the identity of the model for Velázquez’s Rokeby Venus. Her collection of stories, Far from My Mother’s Home (Spanish edition: Lejos de la casa de mi madre), focuses on the immigrant experience. Collateral Damage, published last March by the University of Virginia Press, is an edited collection of women’s war writing, and Imagining Iraq contains short stories told from the perspective of the mother of a veteran. Mujica’s scholarly study Women Religious and Epistolary Exchange in the Carmelite Reform won the GEMELA Prize this year for best book on early modern Hispanic women of 2021.

An Interview with Mary Rickert