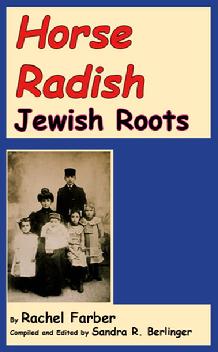 In case you never had a grandmother who emigrated from Eastern Europe in the early 1900s and told you stories about the olden days at her kitchen table, or in case you’d just like to hear those stories again, read Rachel Farber’s slim memoir Horse Radish, compiled by her daughter and republished recently by her nephew Ken Ackerman. Horse Radish is American Jewish 20th-century history in a nutshell.

Horse Radish is not a literary work; no effort is made to craft sentences or make the prose beautiful; rather, it is Rachel Farber speaking just the way she would have told the stories of her life to her daughter, who, in fact, wrote down these snippets of memories. The text is plain, the sentences simple, sometimes even awkward and repetitive. But therein lies the charm of this book — Rachel Farber’s family lets readers into their family story, invites us to her kitchen table. Her feisty and unsentimental personality comes across in utterances like this one, close to the end: “That’s all the patience I have to write. […] The end. Finished.”

First of all, I want to thank you for publishing your aunt’s memoir Horse Radish, for sharing the intimate story of your family. Many years ago I read Irving Howe’s tome World of Our Fathers, and reading Horse Radish I feel I could have saved myself the trouble. In a mere 93 pages, Rachel Farber manages to tell the story of East European Jewry moving to America and making a new life in New York through her personal experience. Was one of your primary reasons for republishing your aunt’s memoir to add her voice to that historical canon?

Absolutely. My Aunt Rachel originally wrote this book just for the family. Her son and daughter — my cousins Sandra and Howard Farber — edited it and printed about 50 copies. It became a family classic, with its funny stories and endless gossip. Over time, we ran out of copies as a whole new crop of grandchildren and great nephews and nieces were born. Horse Radish was simply too good to lose, and we decided a wider audience might enjoy it too.

And so, to the rescue, came modern electronic publishing. I took my old copy, brushed it up, created a new cover and, with my cousins’ permission, launched it into a new edition — available to the world on Amazon.com and Kindle.

I think Aunt Rachel would laugh at the thought that her stories might some day become part of something serious or fancy like “historiography” or “historical canon.” But that’s what it is. Her take on her generation’s great adventure — the migration of over a million Jewish people from Eastern Europe to America in the early 1900s — is genuine, unfiltered and heartfelt. This, of course, makes for terrific reading.

Reading Horse Radish felt to me very much as if Rachel Farber were speaking to me, as if I was sitting at her kitchen table, sorting beans perhaps, while she was telling me stories of her life. Is this in fact true? Do you feel the book captures her voice?

Aunt Rachel had a wonderful sense of humor and energy, despite tragedy in her life. This comes across in her stories. She never finished high school, but her writing is remarkably tight and animated. In a few sentences, she could paint images rich and poignant — the quirky little village in backwoods Jewish Russia where she grew up, the thrill of being a little girl crossing the ocean on a giant ship surrounded by sailors and strangers, the laughter amid hardship of life in New York’s immigrant tenements. She avoids any pretentions and brings it down to a human scale.

One surefire sign for me that I’m reading a terrific book is when I am compelled to read passages to my husband. I read him several passages from Horse Radish, and we were often laughing out loud. For all its hardships, Horse Radish sometimes reads like a slapstick comedy, such as when a bag of garbage lands on a suitor’s head as Rachel is chatting with him on her stoop late at night. Was your aunt at heart a funny person?

Aunt Rachel prided herself in this. Knowing she made you and your husband laugh while reading from her book would be the greatest compliment. But Rachel’s humor always seemed to be rooted in something deeper, the nearness of joy to tragedy — the kind of laughter that keeps us sane.

It is always nice to see family involvement in the publication of what is essentially a family story. How did it come about that you republished your aunt’s book?

Our final decision to republish Horse Radish came a few years ago when, at our family’s annual Passover Seder, we decided to try something different. Instead of telling the story of the Jews leaving Egypt 4,000 years ago, we would tell the story of the Ackermans leaving Poland in the 1900s. A whole new generation of nephews, nieces and grandchildren had never heard it. And so we passed around a copy of Aunt Rachel’s book and everyone read a paragraph or two out loud. It was a hit.

Are there any stories in the book that surprised you? That you heard for the first time in the book?

One that surprised me was about Rachel’s father (my grandfather), Sheah Ackerman, being a small-time bootlegger. This is something I never knew. Rachel tells the story of how one day during the 1920s, the height of Prohibition, he started a fire in their tiny walk-up tenement on New York’s crowded Lower East Side, but was terrified that city fire fighters might come and discover he had been making whiskey in the kitchen sink. He thought they might arrest him or put him in jail. So he frantically ran around fighting the flames as the apartment filed with smoke and the family panicked. He kept his whiskey-making a secret, but not to his little daughter who laughed through the whole scene.

Any stories that you were surprised she left out? Or gave short thrift to?

Horse Radish is a short book, but Aunt Rachel had no hesitation about including things other people might find embarrassing — especially gossip, be it about family members she disliked, or the secret love lives of neighbors in her apartment buildings. Gossip is the heart of all good history and biography, and with gossip, Aunt Rachel was a pro.

Do you feel that, thanks to her book, you got to know your aunt in ways you hadn’t known her in real life?

Actually, I never really got to know Aunt Rachel very well while she was alive. She was 50 years old when I was born, and I knew her mostly as an older woman late in life. The younger members of our family never met her at all. That makes a book like this especially valuable, a window to a past that would be lost without it.

The last chapters of Horse Radish seemed to me an excellent lesson in how to grow old with dignity even though the poignancy of old age is ever present. How do you feel about your aunt’s last years in those centers she talks about?

For all her troubles, Aunt Rachel never lost her interest in people around her. Her stories of living in those Bronx and Brooklyn apartment buildings show courage and kindness.

Are there plans for further Ackerman Family memoirs to be published?

Family history is a highly contagious bug. I have now started researching my mother’s side of the family, the Bronfelds. They too shared that great adventure of leaving Eastern Europe for America in the early 1900s. But for my Bronfeld grandparents, the journey was far more dangerous. They waited before leaving Russia-Poland until shortly after World War I and the Bolshevik Revolution, when the region became engulfed in riots, civil war and pogroms, and America began closing its doors against what were considered “undesirable” immigrants like us. It’s a great story. I hope to have it in print very soon.