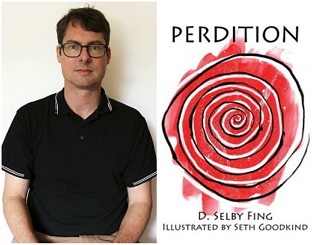 Drawing inspiration from Dante’s Divine Comedy, D. Selby Fing’s posthumous Perdition: Part One of the Profane Comedy finds Fing on a quest for meaning through a bewildering American underworld. I spoke with the author’s son Y.S. Fing about his father’s masterwork and its publication 44 years after the author’s death.

What was it about Dante Alighieri’s The Divine Comedy that inspired your father to write his own version?

Plenty! But foremost, I’d say, was the idea that Dante intended each person who reads and understands his journey, from Inferno to Paradiso, to achieve their salvation through his writing. D. Selby Fing was on a quest to find his salvation, and I think he gave up on finding anybody in his generation who could get him there: not Jesus, not Freud, not James Agee, not Michel Foucault, not the Beatles nor Bob Dylan. So he patterned his journey after Dante but also made it his own. And he figured if it was good enough, it would do what Dante’s work did.

Your father’s Profane Comedy (which is quite funny, unlike The Divine Comedy) takes its outer structure from Inferno. Fing, like Dante, is both the storyteller and the seeker. Dante has Virgil as his guide, while Fing has Abraham Lincoln. But one of the most significant departures from the original is the condemned spirits. Dante’s souls know precisely what they’ve done to earn their place in hell, whereas Fing’s don’t. I wonder whether this reflected your father’s secular intentions for the poem.

Dante wrote what I call “morality with love,” meaning he told you how you should behave so that you can achieve your salvation. (But there is some funny stuff in Dante; for example, people blow horns from their anal sphincters.) D. Selby wrote “irony with love,” which is that things never go as expected or desired, and we find salvation when we are resigned to failing to live up to our ideals as long as we love each other in spite of that. I think D. Selby meant to be ironic when he threw everybody from 1900-1976 into Perdition. Whereas Dante was concerned with morality and salvation, D. Selby, a post-modernist, focused on irony and enlightenment, a personal, secular salvation related to following pleasure to gain knowledge to assert power. These themes are dealt with further in Limbo and Elysium, the [forthcoming] second and third parts of The Profane Comedy.

Lincoln is clear with Fing that he won’t be offering answers in this tour through hell. Sometimes, though, Lincoln throws out counsel: ‘“Please hold your tongue and test what you believe/In the silence of your own conscience.”’ Your father wanted to put forward a philosophy of irony with love. What role might silence play in that?

Listening. Lincoln has to tell Fing a few times that his interruptions aren’t welcome because they keep him from hearing what others are saying. He’s carrying his preconceptions into Perdition, and they simply don’t apply. It’s hard for Fing to stop making noise. That’s something that everybody has to practice in the modern world: turning off, listening. I’ve mentioned irony with love, but for Fing, in Perdition, one of the greatest ironies is that when he meets Marilyn Monroe, James Dean, and Elvis Presley, he says nothing, no matter how powerfully drawn to them he is. But he’s proud of himself when the scene is over, and he begins to see Lincoln’s wisdom. We learn by making mistakes, challenging ourselves: irony, and with encouragement from our guides, love.

Fing meets seemingly condemned presidents outside of time and order. Most speak cryptically. And just as Lincoln doesn’t give Fing (the seeker) any answers, neither does Fing (the storyteller) provide answers for the reader. For my part, I worked awfully hard to decipher meaning in Perdition. Do you think your father envisioned a rare type of reader who could create his/her own meaning, or do you think he may have written Perdition to know better his own philosophy?

I think that anybody who writes epic poetry has to know that many will not understand; most will not even try. But another key inheritance from Dante is the notion that a fully realized verbal/imaginary world can convey visual images to anybody who wants to pick up on them. Think of Buñuel and [the film] “Un Chien Andalou.” D. Selby knew that his words conjured up strong images, which is why we brought this edition out with illustrations. Seth Goodkind is an accomplished artist and historian, and his raw, punk, black-and-white drawings, splashed with and shaded red, compel the reader to think more closely about the words and imagine those images for themselves. So the images get people thinking, and then they create their own meaning. Even so, I submit, there is a methodical structure beneath the chaos!

The most fertile clue in Fing’s journey is in the opening lines, when he recognizes the path he’s walking on as a spiderweb. The symbol of the web conjures concepts like balance, creation, and organic connectivity. Less symbolically, there’s the World Wide Web and its spin-offs. Your father, of course, didn’t live to see the Internet revolution, which makes the scene with the people caught in webs all the more prescient.

On the darker side, one can be trapped in a web! I’m a big fan of R. Buckminster Fuller, and he was a big fan of maximal coverage with minimal structure. So the spider is manifesting a foundational physical principle of the universe. No surprise to me that D. Selby, a mystic of the highest order, would take the web and the spiral as his two architectural, narrative, symbolic structures. And I like that phrasing “organic connectivity” because I think much of D. Selby’s purpose is to find that connectivity in his mind, in his life, and to urge others to do the same.

You’re not just Y.S. Fing. You’re also D. Selby and D. Selby Jr. And you’re none of these fictional people. What strikes me about your use of pen names is that you’re transparent about it. I therefore conclude your pen name isn’t for privacy. Does it, then, hark back to Fing’s philosophy about taking two positions at once? And how much have you been influenced by Roland Barthes’ seminal essay “The Death of the Author”?

I did read "Death of the Author" and enjoyed it, but I learned more from Laurence Sterne about inhabiting multiple identities. But even further back, one of the first things that I remember in the construction of my own identity was when I was probably 4 or 5 years old. I was visiting my grandparents with my four brothers and sisters, and I was playing in the back yard and I realized I had five names. I was named after my father, so I had the normal three names (first, middle, last), plus Junior, plus the nickname they gave me to keep me separate from my father. Ever since then, I’ve known that a name is a mask, and that I never was any of those names that they gave me. The irony being that I didn’t really come into my own identity until I started writing in other names! For me, the pen names are a way to keep distance from the material and to cover more ground as a writer. I never meant to be perpetrating a hoax, so I tell people that none of these are my real name. And I refer to “Borges and I” for a concise explication of the relations of the person to the author!

[Note: D. Selby Fing, D. Selby Fing Jr., and Y.S. Fing are noms de plume for a modest English professor and cultivator of spirit and intellect who prefers the distance of anonymity to whatever the other options are. He has been involved with the Independent since its inception.]

Dorothy Reno is the classic-books columnist for the Independent.