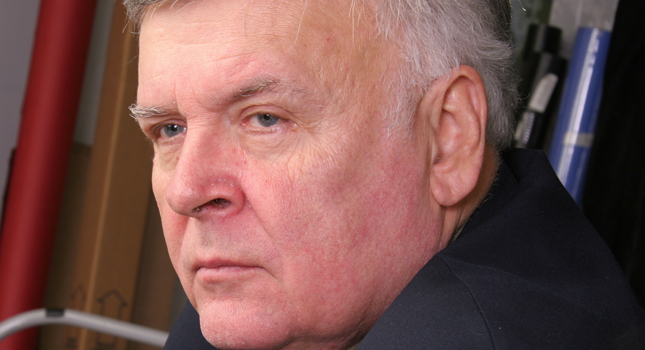 Authorisms: Words Wrought by Authors is Paul Dickson’s latest lexicon. In it you will find contributions to the English language from Chaucer to J. K. Rowling, accompanied by notes on their sources and occasionally a brief story about the origin of the word and a picture of its originator. The book, which appears on the 450th anniversary of Shakespeare’s birth, includes an essay about the Bard’s contribution to English and how many words he might actually have invented.

Previous compendia by Dickson have brought order to the verbiage of both the executive and legislative branches of government (Words from the White House and The Congress Dictionary, with Paul Clancy). The author has also gathered the words of baseball and outer space, journalism, war, and inebriation. We have asked this man of many words to give us a few more.

If it is not a professional secret, would you tell us how you went about collecting, sorting, and deciding which authorisms to include, and why others did not make the cut? If there are rejects, will you save them for another collection?

The easiest part was discovering the coiners of new words. The Oxford English Dictionary was a major source here as were the major proprietary databases of literature which one has access to at the Library of Congress. Because the book was meant to amuse and educate in that order, I selected the most whimsical and probably used about 3% of the words I discovered for this book. Rejects, in my book, are just that and are there for somebody else to use

Do you keep a stockpile of words and phrases awaiting your next book? If so, what will its focus be?

Actually my next book will be a biography, but the next “word book” will be a book which I tentatively titled 101 Americanisms. It will focus on telling the narrative behind words like maverick, slamdunk, bluff, and okay — words with pure American origins. I have been collecting words for this book for a long time now. The other word book I want to write sooner rather than later will be immodestly titled DICKSONARY which will be limited to words coined by yours truly and his cohort (or co-horse, which I hope to see replace cohort after the book is published).

Do people send you words once they know you collect them? Any notable examples?

Actually, I wrote a book some years ago called Family Words which was based on words which were indigenous to single families. I got so many responses to the first book that I did a revised edition 10 years later. One of my favorite family words is “niblings” which in one family was a collective noun for nieces and nephews in the same sense that brothers and sisters are called siblings.

Were you fascinated by words when you were growing up? Did you collect them as some kids collect baseball cards? Did any particular writer or book spark your interest in words?

Actually, I really did love collecting words as a kid, but I also collected baseball cards: maybe that is why my most important word book is the Dickson Baseball Dictionary which I worked on for more than 30 years. The third edition came out in 2007, following early editions in 1987 and 1997. I am working with my editor now on an edition which will come out in 2017. The 2007 edition has more than 10,000 entries. As for being a kid, knowing odd words and phrases gives you a certain edge. I remember learning to say Isthmus of Panama at a very early age because it got a laugh from adults. The fact is, I still enjoy saying Isthmus of Panama because it clears the sinuses.

My favorite story in the book is about H.L. Mencken coming up with the word ecdysiast at the request of the striptease artist, Georgia Sothern. I loved the photo of Mencken at his Menckenest, if I may invent that word — frowning, skeptical, with perhaps a jaundiced view of the whole proceeding. Do you have a favorite entry, and if so, which? Or a favorite originator of words?

My favorite entry in the book is, I guess, the entry for knock knock jokes which were invented by none other than Dorothy Parker at the Algonquin Roundtable. The challenge was to come up with a new form of humor and this was Parker’s contribution. Mencken was good (Bible Belt, monkey trial and omnibibulous (for one who drank anything) were his also, but my favorite is John Milton, who created such wonderful words as terrific, satanic, dimensionless, liturgical, lovelorn, infinitude and earthshaking. In Paradise Lost, he creates the word pandemonium as a dwelling place of demons and is the first to use the phrase “all hell broke loose.”

Is there one field out of the many that you have covered that you think has the richest vocabulary? If so, which? Can you give us an example or two?

The answer would be baseball. Without terms and phrases from baseball we would be tongue tied. Examples? How about: ballpark figure, bat 1000, batting average, benchwarmer, bleacher, the brakes, boneheaded, box score, bunt, choke, clutch, extra innings, fan, get to first base, go to bat for someone, grandstand play, grandstander, groundrules, hardball, hit-and-run, hostile, in a pinch, inside baseball, it’s a whole new ballgame, off-base, on deck, on the ball, out of left field, out of my league, pinch-hitter, play ball with, rain check, rhubarb, rookie, Ruthian, screwball, “who’s on first?” spitball, squeeze play, switch hitter, touch all bases, to have two strikes against you and “you can’t win ‘em all.” Or as Casey Stengel said, “You could look it up.”

Do you mourn the loss of any particular words from the language as it is used today? Are there any currently used words that you would like to see retired? (I want to see the word “whom” restored to its proper grammatical position, and I have to repress shrieks when I come across “reinvent” and “closure.”)

If one more person says they’re going to “reach out” to me. I’m going to retch out. Also, my pet peeve is someone I don’t know or hardly know who calls me on the phone or e-mails me and tells me they want to “pick my brain.” But as a collector, I am something of a scofflaw with little interest in the hand-wringing of the language police. I agree with the editors of Merriam-Webster, who declared there is no difference between imply and infer. The two words co-existed as synonyms for decades until Wilson Follett declared a difference. By the way, scofflaw was a word created as a result of the contest held by the Boston Herald during prohibition. The newspaper was looking for a word to describe Americans who are willfully and determinedly consuming alcohol. The winning entry was scofflaw and it was meant to be a harsh pejorative. Within days, an illegal gin-based cocktail had been invented called the scofflaw, which was served in speakeasies here and abroad

Until I read this book, I did not know that my fear of being caught on public transportation with nothing to read was widespread enough to warrant a word, alogotransiphobia. While I am comforted to know there are fellow sufferers, that word is too long to drop into a casual conversation, as in “Can you recommend a good book so I won’t risk alogotransiphobia on my trip to Paris?” Nor is it broad enough to cover situations like a line at the Motor Vehicle Bureau or a visit to a doctor’s office where the waiting room is stocked only with pamphlets illustrating revolting diseases to worry about or three-month-old magazines. Would you undertake a mission to come up with a neologism of few syllables and wide application?

There are actually two neologisms which I’ve been trying to get accepted for some time now. One is glenhaven for a name that is so innocuous or clichéd that one finds it difficult to recall. Cedarcrest, Plaza Central, Long Ridge, and Harborview are all glenhavens. Boxicrate is another it means to desecrate an area with your standard flat, square, determinedly dull glass and concrete office buildings and apartments. Boxacration was rampant in the latter part of the 20th century.

How valuable is the study of words to our everyday vocabulary?

I’m not sure how important it is to the basic business of communicating with one another. If one is floundering in the water, the only word you really need is help. Although there is a great recreational value in words. I mean recreational in both senses of the word: to re-create which is what poets and novelists do with words and, to recreate which is what we do when we’re having fun. Scrabble games, crossword puzzles, puns, and jokes are just the “tip of the iceberg” when it comes to recreational linguistics. Tip of the iceberg? A titanic metaphor if ever I heard one. By the way, what’s a metaphor? It’s of course a place where you play baseball. (For slow readers: “What’s meadow for?”) Oh.

Alice Padwe, who has reviewed fiction, history and memoirs, and has edited all kinds of books from college texts to spy thrillers, is a logophile herself.

William McPherson is a quintessential man of letters. He founded The Washington Post’s “Book World” and won a Pulitzer Prize in 1977 for literary criticism. Then he swung around to the other side of the desk to write two beautiful and well received novels, Testing the Current (1984) and To the Sargasso Sea (1987).