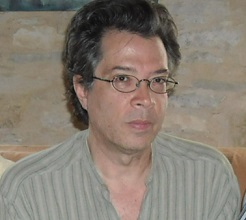 Twenty-five books ago, Andrea Camilleri, already a well-known Italian author, decided that in his retirement he would write a detective series. He set the books in his childhood home of Porto Empedocle in Sicily. He named his protagonist Inspector Montalbano as an homage to a well-known Spanish mystery writer and friend, Montalban.

Almost instantly, the books became bestsellers in Italy and were figuratively flying all over Europe.

To open the lucrative English-speaking market to this phenomenon, Camilleri’s publisher contacted a well-known translator of Italian into English, Stephen Sartarelli. With a deft hand, he tackled the translation of the Italian and the Sicilian patois of some of the inspector’s staff, managing to balance the beauty of the language with the rough neighborhoods the inspector visits, while staying true to the pacing, the glory of the setting, and the delights of Italian food.

How were you put in touch with Camilleri?

Camilleri fell into my hands when William Weaver, the brilliant translator of many now-classic Italian authors, recommended me for the job after turning it down himself, as he was too busy with his new position as a sort of translator emeritus at Bard College. He was also busy translating [Umberto] Eco at the time, and I think he was daunted by the Sicilian aspect of Camilleri’s language. But he was familiar with my work on [Stefano] D’Arrigo, so he thought I would be a good fit. We’d also worked together on a translation of a difficult book by Roberto Calasso, The Ruin of Kasch. I’m not sure how many of Camilleri’s books were in print in Italian at the time. This was around 1999-2000, so there were probably four or five Montalbanos already out, as well as several of his historical novels.

My understanding is that you have translated all of his books into English. Is that correct?

No, not exactly. What is true is that all of his books so far in English have been translated by me, but there are plenty more that remain untranslated. The man, though he started late, wrote a great many books. That said, I think I have now translated about 30 of them, between the Montalbano series and the historical novels.

Andrea Camilleri died on July 19, 2019. I’ve read that he has at least one more Montalbano book — in a vault — that is to be published posthumously. Will you be translating that book?

Actually, as far as I know, he’s got two more Montalbanos in the vault, the last two in the series, which he wrote about 10 years ago so if he were to die from one day to the next, the series would be finished. But since he lived a lot longer than he’d expected, the last I’d heard was that he’d had to revise them to make them conform better to what had happened in the series in the interim. At any rate, I’ll be translating them eventually. He was so prolific, I’m sure he’s got a few historical novels in the vault, as well.

You mentioned to me that you were not much of a detective-fiction fan and that you read up on classic detective fiction to help you understand the genre before undertaking the series for Camilleri. Have you enjoyed the Montalbano books?

Of course I enjoy them. There are a great many things I like about them. The sense of humor, the impeccable comic timing, the wonderful Sicilian characterizations, the evocation of the atmosphere, the playful plots. But perhaps what I like best about Camilleri is the deep sense of humanity and human warmth that his voice and vision of the world convey. It is no small achievement given the rather dark subject matter he almost always works with.

Have you visited the locations in the books?

To my great regret, no. Fairly early on in my relationship with Camilleri, he offered me the use of the house he still had in Porto Empedocle, which was tended by his brother, who lived next door. It would have been a tremendous opportunity to get to know Sicily better — I’ve been there only twice, both times to Palermo and environs — but, somehow, the years went by and it never happened.

[Interviewer’s note: The latest Montalbano book to be translated into English is The Other End of the Line; the first in the series is The Shape of Water. All of the books are in print. The Italian television series “Inspector Montalbano” is available on DVD with English subtitles.]

Joan Leotta is a writer and story performer who has spent most of her life in the DC area. She continues to play with words on the page and stage from her new base in North Carolina, where she spends many an afternoon reading mysteries and walking the beach.