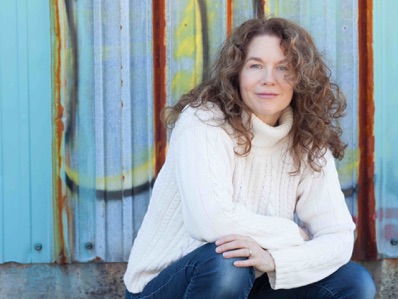 Ben wakes up in a psychiatric hospital, suffering from a gunshot wound he can’t explain. Even worse, he’s not sure who — or what — he is. His estranged wife, Maggie, is struggling to put the pieces of her life back together after leaving Ben due to mutual trauma that neither of them can cope with. Despite her dire emotional state, Maggie needs money and finds employment assisting an elderly lady who belongs to the United Church of Spiritualism, where they converse with ghosts. As Ben and Maggie parse through their difficult lives separately, Maggie’s brother, Francis, a gay, alcoholic priest with legal troubles, might be the only person who can help them find their way back to each other.

The Crooked Heart of Mercy is the sixth book you’ve written, and it’s also your American debut. How do you feel about your literary accomplishments?

It’s a funny thing — on the one hand, I’ve learned so much since the first novel, and part of me thinks, You’ve come a long way, baby. On the other hand, each new book begins with staring at the computer thinking to myself, What are you doing? You don’t know bugger-all! The biggest difference is patience, the understanding that, as E.L. Doctorow said, “Writing a novel is like driving a car at night. You can see only as far as your headlights, but you can make the whole trip that way.” Basically, I don’t mind the not-knowing-bugger-all feeling so much. And I’m grateful for that.

This story brings different religions to bear: namely, Roman Catholicism and the United Church of Spiritualism. Faith, in all its forms, is a theme that comes up in your books. What fascinates you about the Divine?

I was raised Orthodox Heathen — an expression I swiped from the author Susie Moloney, but it fits. Since I was a little kid, I’ve been fascinated by what goes on in houses of worship. I’ve done a lot of “church hopping” — Catholic churches, Pentecostal churches, synagogues, Buddhist temples, Unitarian groups — I’ve even been to a Raëlian meeting. What they all have in common is the desire for spiritual connection (well, maybe not the Raëlians), a desire to find the Divine, to experience meaning in a way that goes beyond the self or the physical world. Even AA meetings embrace the notion of letting go of ego and giving yourself over to a higher spiritual power. If you perceive that divinity as the embodiment of love, then you’re letting go of the notion of your own personal mastery of the world and coming to it from a pretty different place. That’s fascinating to me.

So, if I understand correctly, you’re interested in the quest for something that goes beyond narrow self-interest. And yet, our self-interest follows us wherever we go because we need to survive. Would you say The Crooked Heart of Mercy wants to gets at those short-lived, infrequent moments when self-interest has yielded to what you just called “the embodiment of love”?

I’m continuously struck by the irony that most people are foiled by their own egos. All our fear and anxiety is about self-preservation, and in the end, it’s our refusal to let go of that desire to control the world — the desire to make it over in our own image — that makes us miserable. So, yes, I think letting go of a need to conquer is how we find one another and, ultimately, love.

I’ve never read a book before that combines Catholicism and fortune-telling. And yet they aren’t so different, in some ways. For instance, the pageantry and mystery of Mass has a certain dark-arts, pagan feel. Were you making that connection with this book?

These characters, whether they’re hoping to connect with the soul of someone who has died, or with the Creator, they’re ultimately trying to reach past the meat of this world, they’re trying to touch spirit. I used to go to the Unity Church once in a while, and I recall the minister starting out a homily saying, “So, when you look to the Divine…The Infinite Spirit, the Universe — or as we in the business say: God.” It was her joke about how many people sitting in the pews were irritated by the very word God, yet each in his own way still hoped to commune with unconditional spiritual love.

Ben’s storyline is tough. He’s made an honest life for himself despite a difficult upbringing. He’s managed to look out for his troubled younger brother, and he’s a dedicated husband and father. Basically, he’s a good person. Until he’s involved in a tragic, neglectful mistake. After that, guilt eats away at him until there’s no “him” left. Is guilt a destructive force or it is a necessary pathway to repentance?

Guilt is a pretty destructive force, yes. It’s why so many religions encourage confession or atonement, the asking for forgiveness. I think if you don’t get outside of yourself, talk to someone about what you’ve done, try to connect and make amends, it really does eat away at you body and soul. Most people feel a sense of relief with the process of making a heartfelt apology. To come back to AA — my mother was in AA for many years, so that was the closest thing to religion in my early life — there again is this idea in the Twelve Step program of admitting to the Divine, to ourselves, and to another human being the exact nature of our wrongs. If you don’t find a way to deal with that guilt, I think it eats huge holes through your life.

There are those who think religion causes guilt. It’s a fair perspective, especially in the cultural Catholic realm. But I look around and think: Some of us don’t feel enough guilt. Ben’s father, for instance, doesn’t seem to feel bad about his violent history. And we have no evidence that Ben’s mother feels a burden for abandoning the family, because she never contacts her boys again.

I think it’s a mistake to assume that people like Ben’s father or Ben’s mother don’t feel guilt. Ben Sr.’s fear and regret is apparent in the end at the hospital — probably because truth, in that moment, caught him off-guard. Most people feel the pain of who they are or who they’ve been — unless they’re sociopaths! I sure see it in my own family; once the defenses come down, there’s a dark sense of “I’m a bad person. I didn’t do anything right.” It’s a frightening place to find one’s self, to feel that broken.

Instinctively, no one wants to be there. That’s why we make excuses for ourselves. It’s usually guilt and fear and the impulse for self-preservation that leads to so much self-medicating. Yet, if you don’t allow for that, if you don’t face yourself and the people around you, it’s pretty hard to ever feel whole again.

Maggie is an amazing character in that she’s lost everyone — her parents, her child, her husband; she even feels that she lost her brother to the Catholic Church — and still she has the capacity to care for people. Would you agree this makes her the strongest character in the book?

Each of these characters has lost people who mattered deeply to them. For Maggie, it’s been a domino effect, though perhaps she’s not as completely alone as Ben — Ben’s even lost himself! Maggie comes to the realization sooner that you’ve got to care and connect if you’re going to survive. I think they all ultimately show strength when they admit their own weaknesses, stop licking their wounds, and show up for each other.

This novel takes on some very difficult themes, but there’s comic relief via gallows humor. Even when we’re not in the midst of a wry thought or observation from Ben or Maggie, there’s never a point in the book where it feels too heavy. I’ve been wondering how you accomplished this.

It’s the way I grew up. The darkest moments were when we said the goofiest, most absurd things to one another. It’s a bit of a survival mechanism — you see it in cops, journalists, doctors, friends, and families — there is something very soothing about cracking wise in the face of trauma. Of course, to an outsider, humor in those moments can come across as completely perverse!

In The Crooked Heart of Mercy, Maggie’s brother, Francis, is a priest struggling with promiscuity and alcoholism. We find out later that he’s adored for the amazing work he does for his parish. Are you asking readers to rethink their notions of hypocrisy?

To me, hypocrisy comes down to the distance between our ideals and our actions. So, if I use that definition, then I think there’s a little hypocrisy in all of us. Francis has an ideal in mind, a self he wants to be, someone who shows up, who is capable of giving spiritual guidance, but at the same time, he hasn’t dealt with his own confusion. He hasn’t done the old “fearless moral inventory” and dealt with how his appetites are causing his own self-destruction and, in turn, harming others. These characteristics aren’t mutually exclusive. It’s one of the fascinating things about human beings: Someone can be capable of great kindness and a catalyst for healing, while at the same time be a big, fat, unholy mess.

Ha! Oh, boy, what doesn’t? A visit with my mother, a trip to the supermarket, reading the news…there was a headline a couple of years ago that read: “Teen shoots himself in forehead with rifle 'to escape from a nightmare after taking mushrooms.’” Just that one weird little story went a long way to helping me find Ben’s character.

I have to tell you how deeply this novel moved me. In particular, the way in which Maggie and Francis view Catholicism: Maggie has moved away from it, though she respects it as something foundational to her upbringing. Francis enters into the religious life, but he can’t quite come to terms with all the rules. Is The Crooked Heart of Mercy telling us, in part, that there’s room for ambivalence?

Thank you! Those are sweet words to hear when you come out of the writing cave.

Ambivalence is, I believe, the nature of the human beast. When it comes to religion, people have tried to come up with rules that they imagine will help facilitate a godly life. And some of it’s just churchy bureaucracy. To me, those rules are separate from the actual spirit of the thing, the virtues of hope, love, charity, and self-giving. It’s like that G.K. Chesterton quote: “When religion would have maddened men, theology kept them sane.”

So, you can love the ideals and yet be frustrated by the organization and the way people in power almost inevitably try to throw their weight around. I see this in religious, political, scientific, and humanitarian organizations — everywhere. It comes back to that blasted human ego. All you can do is try not to get caught up in all that crap, try to come back to what matters: the hope, love, and charity.

Dorothy Reno writes short fiction and is a contributing editor at the Washington Independent Review of Books.

Ashleigh Andrews Rich interviews the author of We Sinners, a moving story of a family of 11 in the American Midwest, bound together and torn apart by their faith.